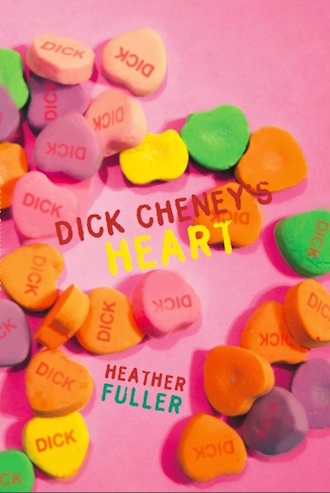 In Heather Fuller’s latest book, she picks up Dick Cheney from the hospital after his heart transplant and takes him to a sprawling mall in Northern Virginia where Cheney reveals that Lynne Cheney is only a hologram generated “in a futile attempt to humanize him.” In the mall Cheney takes comfort in Fuller’s “decade-plus of personal loathing,” and in response Fuller hacks into his new heart and transcribes what she finds.

Although Cheney received a transplant in 2012, many would say he never behaved like he had a heart. Never elected by popular vote and always secretive and surrounded by a heavy security detail, he’s the closest we’ve come in recent American history to a third-world dictator lacking in empathy. He never apologized for lying about WMDs in Iraq, waterboarding in Abu Ghraib, promoting dirty tricks against Valerie Plame or pumping about 200 pellets into his supposed friend Harry Whittington during a hunting mishap.

Fuller explores the tragic comedy of Cheney’s heart through a poetry of jagged edges and elusive speech. As with Fuller’s earlier three collections, she writes of blighted city neighborhoods where “a child saw methadone tents and begged to go to the circus.” Fuller juxtaposes this wasteland and lack of opportunity against the elitist bunker mentality of Dick Cheney, who quickly had the wireless function of his new heart disabled for fear that terrorists would hack into it and shock him to death.

As a community worker in shelters in Washington D. C. and Baltimore, Fuller has first-hand experience with the traumatic experiences of the dispossessed, both humans and animals. She writes: “a few minutes on this watch and you’ll beg for LOL cats.” The city is seen as a wasteland of confusion, corruption and rapaciousness. Yet as a poet Fuller can’t look away or leave. She must serve as witness. She must humanize a terrain that isn’t humane.

While tapping into a heart that never existed, the heart of a tin man, Fuller’s work also deals with a reality familiar to many poets who flee small town suffocation for artistic and intellectual freedom in the city. You have to leave the country but the city in many ways is worse in its lack of respect for humanity and life. Fuller writes:

but the parade busts you

you who moved to the hamstrung neighborhood to avoid

Santa atop a firetruck.

When Cheney receives his new heart, Fuller wants to remain optimistic that he might also have a change of heart. She wants to be hopeful about our world despite triaging meth dogs named after lipstick in the open air. She hacks into Cheney’s new heart when it’s a blip on the grid, before its wireless capability is disabled, but after a while she tunes out.

Why? Cheney always seems to escape punishment for his crimes while the dispossessed and community workers deal with the fallout. Cheney no doubt would call Fuller a “bleeding heart liberal” under his breath with a scowl, jaw like a trap, but our world needs more hearts like Fuller’s, poets capable of reflecting the dislocation of modern urban existence without succumbing to heartless clichés.

Fuller writes “go to poetry/ to clean the carcass” and so we go to her to cleanse our perception of all that is hardened and closed, like Dick Cheney’s heart.