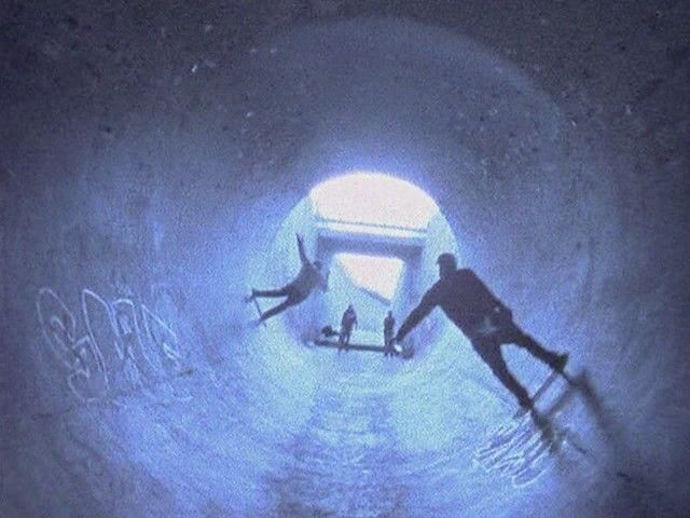 On the day Britain voted to leave the European Union, the driver of the police van that carried Freddie Gray was acquitted of all charges and the spokesperson for an LGBT pro-gun group got on the radio and said, “We’re trying to help people not just feel safe but actually be safe.” Since the shooting in Orlando a few weeks before I’d felt covered in quills, as if some sinister shift in the air had piqued and ruffled them, challenging the equilibrium I’d been coasting on. I fear I’ve mixed the metaphor. My brain hurt, I was tired, I was awake, my skin felt more sensitive than my heart.

When I was in high school, I used to walk home over train tracks. There was no station in our town. It was a freight line. When we went into the city, we took the bus. One day I was walking home with friends and there was a train stopped there. There’d been a stopped train once before, on an afternoon I was walking alone, and I had backtracked and taken the long way around, back under the overpass and down Palisade Ave. and over the railroad bridge. I could see the stopped train from above. On the day of the second stopped train one of my friends ran up to it, reached for the metal ladder, pulled himself up on the platform. I walked up to the face of the train and reached. The ladder’s lowest rung was high. I had minimal arm strength, always falling fast in the Physical Fitness Chin Hang, and my mother was afraid of heights. I was expecting her fear to bloom in me any day. My friend reached down and offered me a hand. “That’s okay,” I said. I stepped back for a broader view. The train was off, cold, it looked as if it would never move again. The bottom of the train was maybe two feet from the ground. Less. I bent down and ducked. The top of my backpack scraped the underlip, so I took it off and tossed it ahead of me. There was a little more headroom beneath, a world of pipes and wires, a dank and greasy stillness. I picked up my backpack and crawled the rest of the way through. “Good thing the train didn’t start,” my friend said, because that’s the kind of friends we were.

There are stories you tell, if you’re me, again and again to reveal or reify your various fatal flaws. You tell them to seem stupid, humble, and self-aware. We all have our faults. Good thing. When I tell the story about the train I feel full. There’s a beautiful guiltlessness to it, an emboldening abdication of responsibility. Going under simply seemed like the best way through. Later, my life became enriched through knowing many people who had travelled the country on moving freight trains, something I would never do, because I am afraid of heights and of getting in trouble. What I think I would love is to feel that faceful of air coming at me, to eat a good apple in a boxcar.

Have you seen Killer of Sheep, that beautiful scene where the kids are leaping from one building to another? It’s shot from below, you just see their outstretched legs. It’s gorgeous, they’re really flying. In another kind of movie, you’d be expecting the tragedy where one of them doesn’t make it. Maybe you’d see the stumble but not the fall. In Killer of Sheep you see the kids landing safely, climbing down, and clambering to try again. One way to read the scene is that these kids don’t value their lives, that racism and poverty have taught them not to, and another way to read it is that they absolutely value their lives and are experiencing them to the fullest they can muster. These young black kids in Watts with great 70s clothes. I’ve been conditioned by culture to think of their flying or not flying as a tragedy.

I often show Killer of Sheep in my introductory fiction classes, to talk about image and plot and action, i.e. what does it mean for something to “happen”? Another film I show frequently is Paranoid Park, the Gus van Sant film about a white high school kid who accidentally kills a security guard when he’s hopping trains for the first time. He feels super guilty but at the end he burns his diary confessional, and I’ve been conditioned by culture to believe he’ll get away with it. I show that film to talk about the usefulness of fragmented narrative. I think using films to talk about writing is productive because we can see the machinery of narrative a little more clearly, or I pretend that we can.

I’ve been wondering if there might be a film I could show myself to help me figure out what needs to happen in this story I’ve been working on called “The Black Door.” The story has to do with the various doors the people of different races in the film do and don’t use because they have been relegated to using one door, or maybe they have reclaimed that door as a point of pride and property. The film would have to do with feeling safe vs. being safe. It would be an example of how an idea—or an object—a door—could saturate the narrative without being one-note or too limiting. It would also show the main character thinking herself central to the story, in fact driving or narrating the story, but ultimately coopting it in a way that would make it clear that it is not her story to tell.

Let me put it another away: the film that I need to instruct me begins with a problem (racism) that the (white) protagonist initially feels is external to her, and at some point she begins to feel implicated by the problem but she’s looking at it the wrong way. Her goal becomes self-extrication, which she accomplishes by seeking to extinguish the problem at its symptom, not its source. And there are of course future psychic or even material consequences to her actions (her whiteness), though they may not appear onscreen. Have you seen a film like this? Could you tell me how it ends?

Usually when I’m writing a story I try to believe that the answer to what needs to happen comes from the language itself. But all language, and thus all happening, lives in and is borne by the world, is thick with it. So that when you’re waiting for the next word you’re also listening to the sound of the room and the sounds slitting in from outside it, as you force your mind blank enough to hear what comes next, hoping to surprise yourself.

In the lull between words I wait for the tug. My quills prepare. I imagine a precipice from which I can fall and not know I’ll land safely.