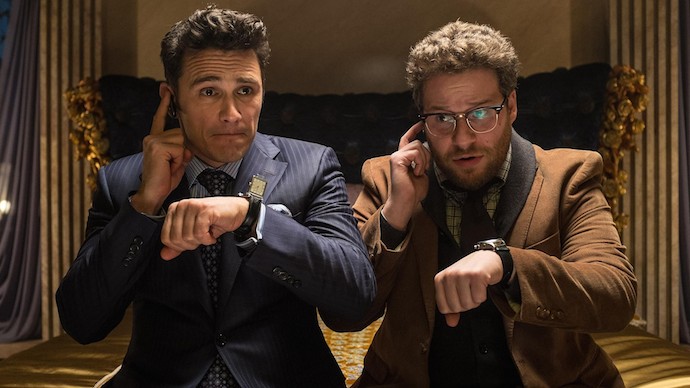 In the 1943 Warner Brothers cartoon “Daffy – The Commando,” a curtain labeled “Asbestos” is pulled up in front of a Nazi officer to reveal Friz Freleng’s anthropomorphic black duck, frightening the commander away by simply making a face.

It is the face of the American stereotype of the Japanese, one of protruding front teeth.

I use this as a starting point because it seems that in the film The Interview directors Seth Rogen and Evan Goldberg have created protagonists whose incompetence and ignorance serve as plausible reasons for the two to make jokes based on language barriers. While it can be argued that the humor is acceptable because of this, surely it can be paralleled with the concept of “anti-war” films such as Full Metal Jacket being viewed with relish by American soldiers in combat. Franco himself should know this, having demonstrated a self-awareness of Hollywood’s history, in past endeavors like his 2013 novel, Actors Anonymous.  This is a man who knows his audience even as he makes faces that put Tex Avery to shame.

Which is why, when you consider this fact, that the film’s issues of homophobia and casual misogyny should come as no surprise.  The form of “bro” culture we see on screen is not only one of men behaving as boys, but really a culture of marginalization. They aren’t afraid of Americans, they’re afraid of The Other, the unknown.

Who is the unknown in this movie? Gay men, women, and of course North Korea and Asia in general.  We are expected to laugh at Rogen and Franco making out during a party sequence, at Rogen inserting a metal cylinder containing ricin strips into his rectum.  The two female characters, Jong-un’s assistant Sook and CIA agency Lacey are one-dimensional, acting as either objects of desire, using the men for ulterior motives of their own or both. At one point, I wondered which script doctor wrote the female sex-positivity shaming joke about Miley Cyrus having cameltoe.

Amidst the brodown between the otherwise likeable pair of Franco and Rogen, action film tropes and pop-culture jokes fly through the air like objects in a food fight, yet leave very little sticking to the walls. At one point, in an odd choice, the Hype Williams film Belly gets a nod as Sister Nancy’s dancehall classic “Bam Bam” plays during a slow motion sequence leading up to the actual interview of Kim Jong-un.  Much like the duo try to complete their mission with a handshake, failing each time in panic, any attempt at a statement on free speech is thwarted by its own reliance on this and a cringe-worthy self-awareness, ticking off boxes of celebrity cameos. Halfway through, I expected an appearance by Gedde Watanabe, the actor of Japanese descent who played Long Duk Dong (incidentally a Chinese character) in the John Hughes film Sixteen Candles, although I suppose that might be a bit too old for to satisfy this audience’s appetite for nostalgia.

After a lag in the plot a little over the halfway mark, once we get to the interview itself we see shots of various groups watching it unfold over live television: Central Intelligence Agency operatives, North Korean families, and American soldiers in a vague desert setting (with a product placement for Glaceau Smart Water and Vitamin Water). Aside from a reference to Captain Crunch, I laughed loudest at the joke never spoken: the irony of the CIA’s history of involvement with cultural imperialism, specifically The Paris Review as real-life Franco filmed himself reading a story by Amie Barrodale published there in 2011.

On the subject of artists expressing political views, Orson Welles was quoted as saying, “I suppose you are a fool to do it, but if you happen to be more interested in the political question than the size of your audience, then it doesn’t matter.”  The Interview resides in a glass house constructed of cheap jokes with not much to balance them, where the discerning public can see that the producers and Sony were much more interested in exploiting a concept as a political statement for commercial gain and the feet-in-water testing of studios streaming films a decade late. As someone who generally enjoys both Franco and Rogen, I was disappointed to see such a thoughtless effort.