Girl Standing with Death by the Sea 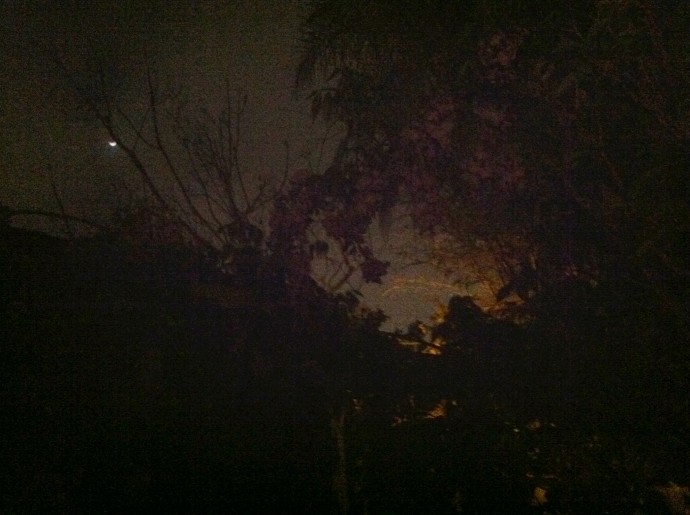 Girl Standing with Death by the Sea

First, there was rain.
Or the surface was scratched.

It was a long distance from green
to green.

Death was so quiet,
so patient.

Perhaps there had been trees.
Living ones.

It reminded her of standing on top of a hill
and looking down at the city trailing below.

Maybe, in the distance, a sail
or a buoy.

Or a sprinkle of stars, recessed
in that intaglio of green.

And a road, curving along the coastline,
but vacant.

It’s so different
from standing on the footbridge

with girlfriends, or cousins,
looking out at the noon lake

or turning around at sunset, removing a hat.
Letting the lake go black.

(In another version, the halo was red—
there was a halo in that version.

It covered her head like a hairband
but she was alone.)

She stands, looking out, until dawn
until the greens are mild

shades of blue, and indigo
is the only place that death might be

nothing but a squiggle,
a puzzle piece.

It moves like a wet shadow.
If it moves.

Or now it’s dark, her hair is longer,
she carries a tambourine

of yellow roses, and death
is only herself, older, and then much older.

The one in the middle—that self—opens her legs in a V,
naked, clasps her hands behind her head—

but she, the sea-looker-she, looks out at the sea.
Feels them, standing behind her.

She has never seen her own exposure, though she feels it.
When she finally sees it—its strangeness, her own—

well, I tell you, I can’t explain why,
but it makes her radiant.

Even when everything goes to woodcut white and black,
she stands on a road

and, behind her, it is not death, but a woman with hair—
herself—and skin. And brows. A woman fully exposed

and her dark-clad companion—night, herself.

and she stands on the black sand before dawn
in her long pale dress and the frothy, possessed black

waves must be wetting her feet and behind her

a figure approaches—a man?
We see them from behind.

She does not yet hear him.

In her private future red bedchamber,
in her long dark confusion of hair,

there is no shame.

Yes—there’s a man
and her three selves

as she stands in ochre fog
looking out to the sea.

Her hair spills back
into cloud into branch

she is almost a ghost
he clutches his heart

not a pearl—all the way down the water
it makes the road larger, pale and wide

with light until we see her turn away
from the water

and now the reflection, long as the dark the rising
dark of the trees—

it is before, just before, they touch.
Death sits silently by

There are so many versions.

No, she was never alone.

————————————————————————
Sarah Maclay is a poet currently living in Venice, California. Her books include Music for the Black Room, The White Bride, and Whore (UT Press), and her poems and criticism have appeared in APR, Ploughshares, FIELD, Poetry Daily, Slope, The Laurel Review, Ninth Letter, The Writer’s Chronicle, The Best American Erotic Poems: From 1800 to the Present, and many other spots, including Poetry International, where she has long served as book review editor. She also served as artistic director of The 3rd Area, a gallery-based reading series in Downtown L.A. and Bergamot Station. She teaches creative writing and literature at LMU and conducts workshops at Beyond Baroque.