About a decade ago, I purchased three paintings from an antique shop in Corpus Christi, TX.

Corpus is one of those cities where most sons become something like fire men, and my parents have lived there for a little over twenty years. I left when I could, but I like to visit.

My mom and I used to get daytime drunk and do weekend shopping. I’d let her ferret me from place to place so long as she let me get business-style corkscrewed in the process, and she took me to one of those ancient gew-gaw shops that sells trinkets and smells like wet socks and scented candles. I was experimenting with malt liquor and was feeling loopy.

My wife was in tow, and she and my mother had picked out a few things—black spotted mirrors or electric fans that no longer turned on but looked smart.

They were checking out, and, at the point of purchase, was a stash of paintings done by some dead woman. Apparently her son unloaded them there on the cheap or was selling them on consignment, and each one was only five dollars. And, like I said, I bought three.

Now I have no idea who did these paintings and each one is in its own style and two of them I’ve become rather fond of. One is in my bedroom and one is in my office and my least favorite is on my living room for all to see. How that worked out is a question for the wife.

There’s a famous poem by Frank O’Hara called “Why I’m Not a Painter” and I think it’s about sardines. I’m not a poet or a painter, and I wish I was something like a fire man, but instead I teach English on the Texas/Mexico border and try to pretend that colonialism is dead. Regardless, I think things about paintings when I see them, which is the great thing about the visual arts: BREVITY!

These are unnamed works, you understand, but, in the interest of being interesting, I’ll call them what I want to call them.

This first one is my favorite, and I call it: “Maybe that’s Jesus.” 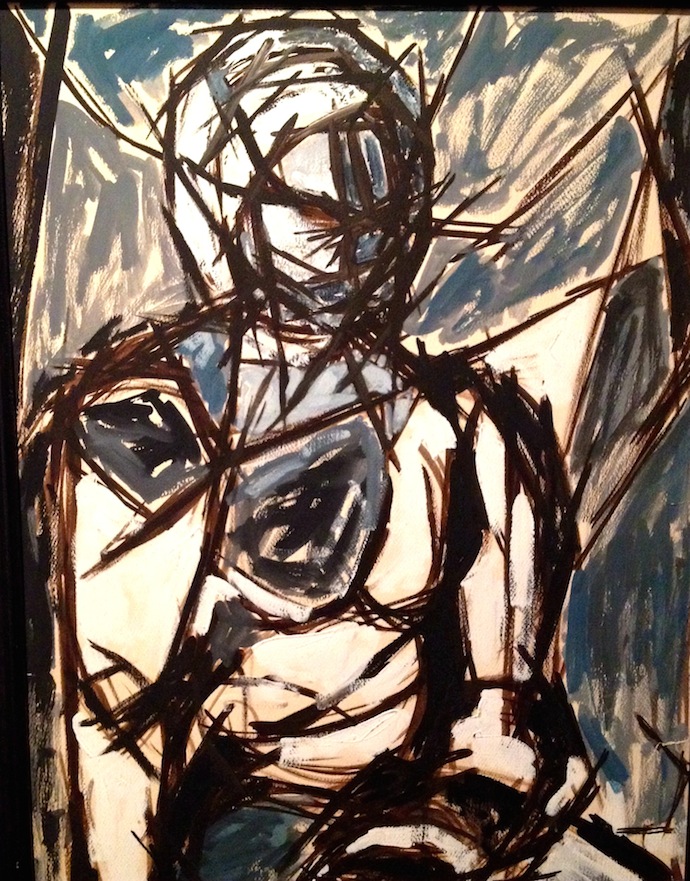 It took me a long time to decide it might be Jesus, and maybe it’s not. In the top left corner there is something like a cross, is the thing, and the subject’s head seems adorned with a crown of thorns. There are no eyes, but it seems the figure is looking inward. It’s like torture for him. He’s a pitiful thing with no hands. Do you think that was on purpose? Do you think the dead mother couldn’t paint hands? 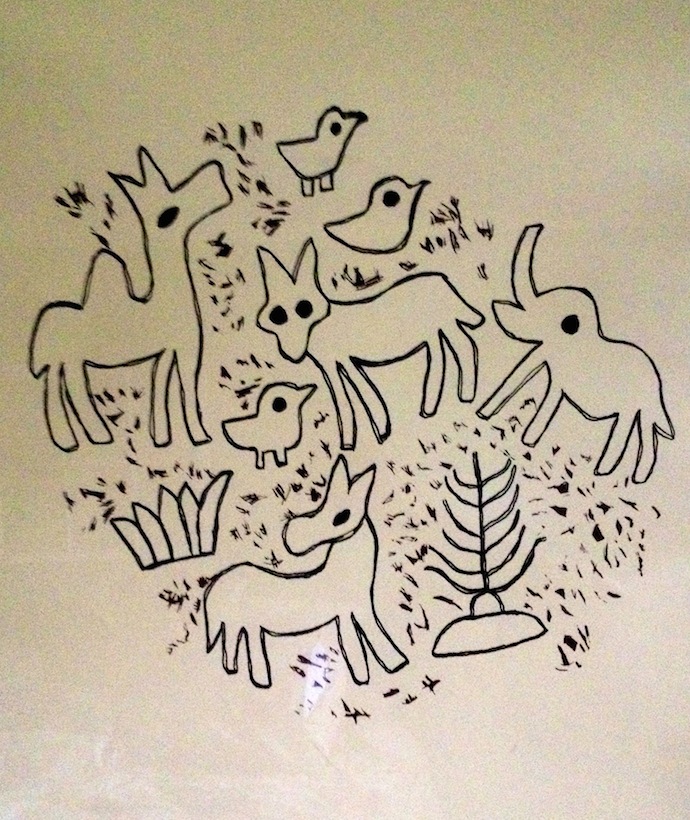 This one I call: “Which one of us is Gonna Eat the Other.”

It’s a bunch of animals with alien eyes standing in a negative space, and I think there on the bottom right is a Christmas tree growing out of a flying saucer, but I don’t know botany and it might be a candle holder. I think there’s a wolf, a camel, an elephant, some baby chickens, but I don’t know what that bottom animal is. I do know, however, that if you eat a pot brownie and stare at this thing, all the animals move. I shit you not. They don’t change location, but, man, they fucking shimmy. 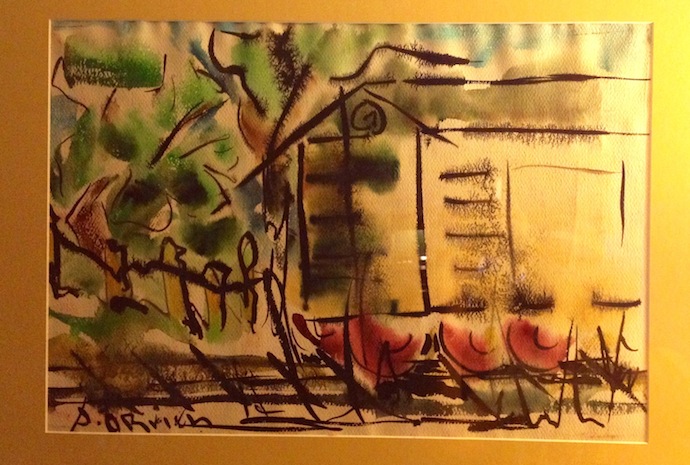 This final one I call: “A House that is also a Choo-Choo Train.”

See, there’s tracks at the bottom and wheels. I think it’s a watercolor. I didn’t really like this one at all, and my assumption is that I only purchased it because of the name at the bottom left, which I believe is “P. Orvikn,” but I’ve Googled the shit out that name and its variants and I can’t seem to find a trace. It’s fairly likely that the cashier who rang me up told me all about the artist, but that was back in the days of forgetting, when it was fairly common for me to drink to a blackout state and forget days at a time—even when I was with my mother.

But herein lies the most curious quandary about this whole ordeal for me. I’ve had these painting for about ten years, and I know less about them now than I probably did when I purchased them. Sure, I know things about them as objects. I know what walls I’ve hung them on, how many houses I’ve moved them to, how much their frames cost and where I had that done. But I don’t know a thing about them as compositions. I don’t know the intent of the artist.

This summer I went to MoMA and saw plenty of pieces of shit that I’d be embarrassed to hang on any wall of my house, but what made them special was the politics of them. How they “said” something about art. How they posed some kind of argument. How they changed the definition of quality.

My paintings, or the dead woman’s paintings depending on how you look at it, don’t do any of that. They can’t. They lack context. The only thing they can really say is: don’t die or don’t drink malt liquor.

I haven’t died yet, and I don’t plan on doing that for a spell. And I haven’t drank malt liquor for a long, long time.