Getting to Funky Town: On Lyric and Fantasy in Micah Ling’s Flashes of Life 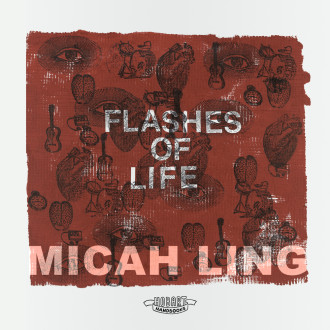 I love ekphrasis–I used to think it was because of some deep, unrequited connection with art or the visible world in general–but now I see it for what it is: any excuse not to speak simply & directly about myself.

The thing is, I still believe in the confessional poem. Or, at least I still have things I need to confess, and I am still interested in hearing the confessions of others. Ekphrasis–as I conceive of it–lets us speak about ourselves through the backdoor; it shows us new ways into our childhoods and failed romances, through art, history, data, or really anything outside of personal memory.

In “Ars Poetica,” Dottie Lasky writes: “I want to feel the dread for others / I can feel it through song / Only through song am I able to sum up so many words into a few.” She is of course, speaking about poetry–craving, as I imagine many poets do, a kind of intensity of experience more accessible through language than through experience itself. At least I crave that.

Micah Ling’s Flashes of Life is quite admittedly an ekphrastic collection, constantly looking to the language of popular song as a way of seeing and exorcising dead selves. Each poem, focused on a song, album, or citing several at its conclusion, gives us a door into a world of impressions playfully interjected and revised upon. When strung together, these fragments achieve a highly personal quality, gesturing to private experiences accessed, perceived and intensified by lyric.

Flashes’ opening poem invokes Billy Joey’s “Piano Man,” then diverts to speaking in images–closing with the lines: “A song is so red, it’s more than memory.” These lines are central to Ling’s poetics and the collection, a pastiche of lyric, memory, lyric as memory, and memory as lyric. The night I got my DUI, I was pulled over on listening to “American Pie.” Who hasn’t heard a popular song and almost traveled through time?

Often, Ling uses song to enter into her own romantic history and relive it, either intuiting or overtly stating a what if impulse. What if things has gone differently? What images would be left behind? Would the song change? Would the poem?

In her poem “Men at Work,” “Son of a Preacher Man” is interjected by a different kind of song–the revving of an engine in a voicemail, briefly bringing the author her back to a past relationship. “I was trying to be younger and older at once,” Ling reflects, briefly using narrative impulse to fight off the intensity of the memory before letting it wash over her. Though we rarely stray from the author’s attempts to fight off and reposition herself in relation to her past, some moments, like this one, leave the reader with an abstract kind of inevitability that might be read as hope. Other poems try more aggressively to extricate their speaker. “Memory is fiction,” opens the poem, “The White Stripes: Elephant,” a series of flash cuts moving back and forth between anecdote, image, fantasy and self-correction:

Like the time a lover asked me to fly
to Hawaii, and I went,  and the only way I remember it is
because of Elephant, which I played on repeat.  But that
isn’t  true. I didn’t  go  to  Hawaii.  I’ve  regretted it  more
days than not. I did listen to Elephant, though. It was the
only album I owned for a while:  living out of my  car  and
always managing to be clean and smelling lovely. I lost a
decent amount of weight,  sleeping sweaty  nights  in the
back seat: the thick midwest wall of humidity. And every
afternoon  driving  that  Chevy  around,  painting houses
and swimming in rivers, running quarries and showering
at the college.

I believe sort of a cheesy thing: that poetry can create, or at least test out worlds that aren’t possible in ours. We briefly can enter these worlds and exist there, though ours inevitably interrupts. At their strongest moments, Ling’s poems interrupt back – they fight against the real, changing the song when it is necessary to prevent the landscape of the poem from crumbling back to the familiar. (On the next page, she writes “The unfamiliar is all I want.”)

Some of Ling’s fantasies turn outward, or–to be trite–face the music as a way of doing so. “Space Oddity” imagines a domestic and wistful David Bowie with the same stark realism used to render Ling’s own memory, as if all that distinguishes fantasy from the actual is the manner in which we choose to address it: that anything we take the time to grant sensory detail and emotional attention is as real as anything else. This is a nice thought, though it is perhaps more of a wish then it is an epistemological reality.

Ling wrestles with the nature of the real throughout Flashes of Life, which restages memory over and over while also signaling that on some level, these efforts are ephemeral, limp, and will collapse when the song stops or the poem has ended.

“Strobe”’s subject as German inventor dies experimenting with new ways to capture the invisible. (Will we?) “Don’t find a way out: escape is silly,” writes Ling in “Otis Redding”–though this is perhaps exactly what she is doing–trying to find a way out and eventually returning home, where all our fantasies inevitably lead us. Disappointed?

The companion poem, “Otis Redding Revisited,” is a little more optimistic, its speaker speculating that, while we are likely to break or be broken, the broken can heal and our fantasy lives might even prove useful.

“People find a song/and it docks them,” Ling proposes. So maybe can get somewhere better if we try hard enough at the right moment–or, as the author puts it, “When you’re under pressure / when you just want to go to Funky Down, you get there.”