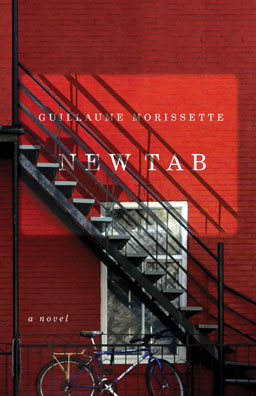 I was a few pages from the end of Guillaume Morissette’s New Tab when I put it down to go look at the internet on my laptop. Before I got back to the book, a friend of mine started a Facebook chat conversation with me. I assume because she’d seen a picture I posted on Facebook of the two versions of the book I had in my possession—a large, spiral-bound review copy and a smaller paperback copy of the actual book. She wanted to know if I’d read it yet. I told her I had seven pages to go. Then she asked me if the book was about her.

“Yeah, it’s basically about the period in his life where he was hung up on you,” I said. “That is the main driving thing for the main character, basically. Like, it’s sort of: you, job, movie screenings in his backyard, his personal issues, and his friendship with someone who I think is Marie Jane.”

As with Morissette’s previous book, I Am My Own Betrayal (Maison Kasini, 2012), whether New Tab’s subject matter is the point or is besides the point will more or less come down to which side of 1985 the reader was born on. For many, Morissette’s pitch-perfect recreation of the 20-something Montrealer lifestyle (circa 2010) will seem incomprehensible and/or ridiculous, marked as it is by Facebook use and Pabst Blue Ribbon consumption, drugs and cell phones, house parties and loft parties, buzz bands, dive bars, police officers responding to noise complaints, sketchiness, loneliness, listlessness, a succession of non-goal oriented people with mild to severe financial issues, and vague non-lationships punctuated by confusion, desire, longing, and substance abuse.

As someone who was in the creative writing program at Concordia University with Morissette at the time many of the events fictionalized in the book take place, I can testify to how closely his portrayal mirrors the spirit of the time and place, but the spot-on quality of his narration will turn off the same demographic who turn their noses up at things like selfies, tweets, Snapchat, and reading your writing off a phone or laptop at a reading instead of off printed paper. For instance, if not for the fact that it’s based on Morissette’s lived experience, protagonist Thomas’ job at a video game company might seem parodically on-brand in a city where so many young people work at video game studios, but ultimately, Thomas’ navigations of the confusing and inscrutable logics of workplace social and professional politics represent some of the book’s freshest moments—Thomas comes off as an adorably befuddled alien creature trying to make sense of something not necessarily beyond his capacity to operate, but simply completely outside of his frame of reference, like a raccoon in a garage, scrabbling at a discarded wrench with its tiny black paws.

My friend—in the book, the character based on her is named Romy, short for Rosemary—asked me if New Tab was good.

“I’m not sure how I feel about it exactly,” I responded. “I’m not sure it represents much of a step forward from his last book,” a compilation of short stories and poems, “so much as just, ‘This is me, Guillaume, now in novel form.’” I imagined a well-liked cereal brand re-packaging itself, but not changing the actual cereal in the box.

We talked a little bit about our lives. Perhaps because of reading New Tab and being reminded of my time at Concordia, I told her that I was starting to feel old. Since I’d gotten a full-time office job in the previous fall, I’d started feeling disconnected from the life I’d lived as a creative writing student, the one New Tab describes so well—readings, house parties, drinking in groups in bars—quite apart from not taking classes anymore. I was increasingly certain that my tendencies toward going home and staying in were no longer going to be balanced against naturally occurring opportunities to hang out with other people.

“You just haven’t hit your prime!” my friend told me.

“I have no idea where my prime is,” I typed. “I’m in the dark, fumbling, trying to find my prime by feeling for it.”

The great strength of Morissette’s writing is how he sees and interprets the world. Though his mother tongue is French, he’s been writing exclusively in English since he set out on his writing career—but the most interesting translation going on in his writing is how he translates aspects of his lived experiences into concrete examples using his extremely well-honed ability to create simple, clear and amusing similes. These similes were in evidence in I Am My Own Betrayal, they’re consistently in evidence in his tweets and they are out in full force in New Tab. In Morissette’s world, a certain, specific level of social anxiety is simply a default setting; a drunk person’s body is a tank they’re trying to maneuver; breaths are little laser beams. There’s a certain video-gamification at play here; there’s no concept too vague, metaphysical or poetic for Morissette to be able to distill down to a piece in a functioning gameplay mechanism—and yet, he pulls the trick off so consistently, you can almost forget he’s even pulling off a trick at all. The cereal-box book; my prime, hidden in the dark—these thoughts were symptoms of the effect New Tab had had on my brain.

Though with his debut novel, Morissette does not make any significant stylistic strides forward from his already quite strong short-story collection, he does strengthen his grip on his own distinct voice—and consolidate his power over the reader’s brain. New Tab is a book resolutely built for today. More than just a clever name, a new tab is a digital metaphor for a fresh space full of possibility, the blank page of 2014. If you give it a chance, like a video game whose levels start simple before gaining slowly but steadily in complexity, New Tab will be more than happy to teach you its way of thinking.