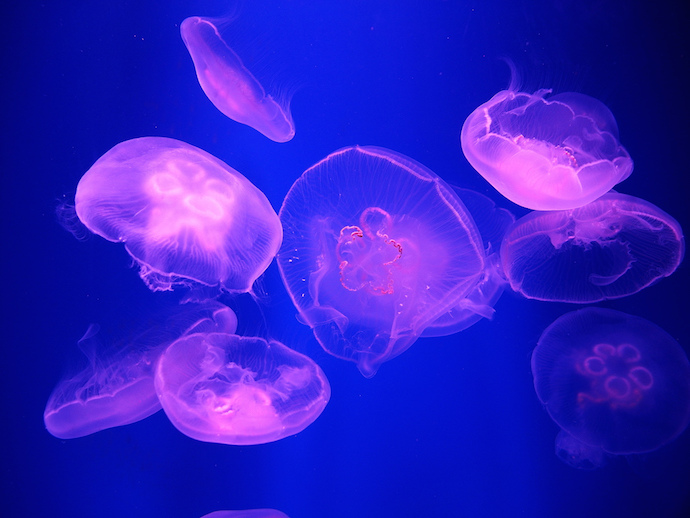 The sun’s meniscus swells the horizon in the East of a dream in which all difference is measured against an arbitrary and fortified gold standard.

At first it was peaceful, snow falling slow and straight down. But the wind picks up, polishing the street with a thin veil of salt while the fatter conglomerates of snowflakes whip around and twirl like swarms of albino locusts.

Though it is a dream wherein the simple difference between benefitting and suffering make the reasons for these perceptions clear enough.

Even those who benefit suffer.

While way out the seas riot, all tumult and brawl. Waves climb, then drop like glacial cliffs under strobe and skeletal flash, electric fissures vandalizing mist. It’s a snarled monochromatics of foam as scree, slate as spray, and that pixel-mess obliterates the horizon.

Suffering is a quality of its structure.

A structure whose integrity relies on categories of difference, not as a means of teasing out and subtilizing new territories of perceptual experience (as mixing two distinct colors can make a whole new range), but as a means of reducing, fixing, and organizing difference in light of the extant values of the dream itself.

Spasmodic enclaves open in the cities of the dream. In its boreal forests and deciduous copses, its swamps and grids.

Tomes rise and populations occupy all floors of their poisonous symmetries, whose ephemera condition the actual, not the other way around.

Little kids stand in the shade, conjuring unblemished sunlight to flood their ventricular substrata, which causes temporary disturbance to a dream that absorbs and incorporates any siren or alarm into the structure of its own going narrative.

Others pick the signal up though and, dealing in dream’s matter, alter the workings of its surface so as to expose its holes and trapdoors.

Their hands are tied once the way’s shown, but they return quieter than before, merely pointing. And they’re more trustworthy somehow for it.

A dream whose ultimate goal is disposable income.

It’s scale is old and endless, one second moving electrons, the next, perforated score-lines along the crustal plates of earth, where motion causes continental stress via convection cells within the mantle, rotation itself, or gravitational forces exerted from without.

A dream whose operation is not the utterly whacked-out and catastrophic revolution of consciousness, but the stylistic appropriation of the imagery such states produce.

Citizens eat it up and mime it, whose subconscious is stutter and shrink.

A dream whose inhabitants believe the dream itself constitutes a natural order, thereby justifying their station and relieving them of any sense of responsibility for it; karmic autopilot up against the absolute and totally nude hinge the present is.

Hinge of immediate space-time, doused in mercury. Circadian ease. Prosody of unintended breath and tidal throb: same thing, and perceived to be. Zone of ark.

Zone of an active vertical line, crossed by a passive horizontal, then leaned on its side like an X for stability when gravity returns and receptive healing turns back to practical sustenance.

I wake up, prep for some hours, then head to work.

Certain inhabitants see the dream as malleable, though, thereby railing against the false sturdiness of their station. Thereby seeking to expose the dream’s inherent disequilibrium.

And they hold up mirrors. And they accentuate, in cutting and somehow humorous ways, the dream’s most hypocritical features, aikidoing ancient and justified anger, bottomless and ongoing sorrow, into caricatures which paint certain shapes of the dream shameful.

Factions solidify in light of particular modes of exposure. Or, consensus grows around modes viewed as lacking, chalked too full of glaring inadequacies, and that consensus itself becomes a subsidiary mode, which takes its place among the hierarchies of the dream.

And there are those who, despite knowing the structural arbitrariness of the dream, still believe with the narcissism of the old geocentrists, themselves to be the nucleus, so seek to preserve their advantageous place like the idea of money around which a corporation grows.

Around which others weep, not for the loss of a practiced symbiosis between self and earth, but for the no longer permissible breed of nostalgia its opposite produces.

A dream who imagines a white room neutral.

Storms, like purple jellyfish, dangle their electrified tentacles at the outskirts of the deserts of the dream.

In which certain figures practice ascetic restraint as antidote to Plato’s horses off the reins like twin Olympians whose prowess and feats don’t inspire new charioteers, but dazzle instead the polis into the fixed drool-faces of endless spectatorship.

Some decide, however, they’d rather not cut their eye-lids off to stare at a wall for like nine years straight, but neither do they quit, give in to some other chump’s record, become the field on which the option’s always run—maleness and whiteness being media evil might easily board and ride at peak hours without disturbing the quietude those surfaces afford.

Nor merely dictate whimsy, celebrate luck of place and time, like, “we’re not fixin’ shit, we’re sexy and we’ve got all the money and resources so we can smoke screen the tell: a nervous tick inching toward skill like gracefully twirling a pen, zippo tricks, or running a coin over our knuckles in some semi-creepy display of interdigital dexterity. And, hey, since the careful nudging of this generation’s punks and little fuckers toward full-time gigs as citizen-artists of the dream pays so handsomely much, we’ll have a craft beer and shift in ideology with no corresponding shift in behavior, please, where eventual solutions include more green spaces and better land management, swift global divestment from fossil fuels, or an internationally coordinated effort to inject the upper atmosphere with a cloud of reflective sulphates to block the sun.”

Some improv against. Cut between the austere and the dipshit in us and it’s not accidental.

A dream in which we tap our own wires and while it’s a little invasive for the self to forgo more ornamental storage to favor senses marketing just doesn’t give much cred to, we like our trials by fire and our baths in the dew, both jiggly-rigged and low-fi, nearly private, no profile almost whatsoever, our selected lines unfold in the orders we decide.

Brett Price is a poet and editor. He’s been a curator for the Friday Late Night Series at The Poetry Project at St. Mark’s Church in New York City and the general manager for Ugly Duckling Presse, for which he now serves on the advisory board. He lives in Cincinnati these days, where he serves beer on the weekends and teaches at the Art Academy of Cincinnati during the week. Recent work can be found in Big Bell #9 and Portable Boog Reader #9.