#FOLLOWMEBOOK – THE END IS WHERE WE START 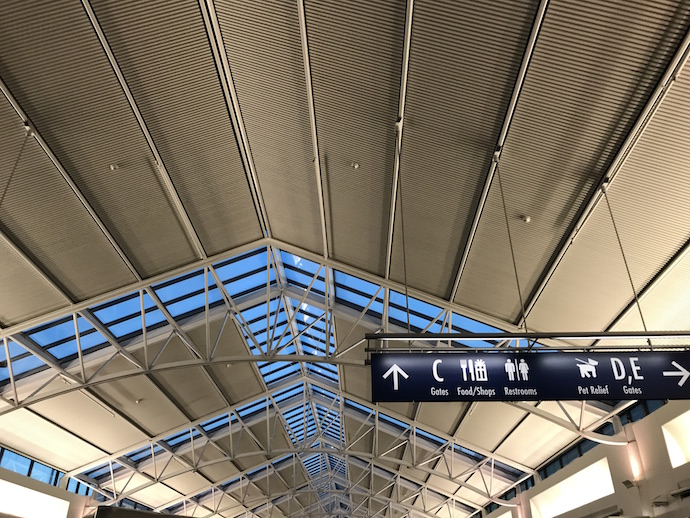 I could check in right now, from the relative comfort of my phone, but I can’t stand to look at it. I place it screen down on the table, staring blankly at the grimace emoji sticker brandished promptly on the Mophie case. Mascot, so-to-speak, of the entire project. What began as a joke became every bit the perfect expression for unrelenting human connection: [grimace emoji]. I yawn, think about going back to sleep, try to go back to sleep, fail to do that, and then get a text from Kevin Sampsell, who had graciously let me crash in the garage-turned-art-studio at his house, where he lives in Portland, OR. The previous day, I had finally reached the end of the road, logging in 6175 miles on a red Ford Focus I felt no attachment to upon finally dropping it off at Budget car rental just outside of Portland International Airport (PDX). I wake up knowing I got, at most, a few hours of sleep. There’s no longer any attempt at concealing it: My joints ache, my body shivers and spasms with exhaustion. Sleep hasn’t come easy and will continue to elude me.

The momentum of the road persists a full day later, a jolt of vertigo arriving without notice, the result causing me to lose focus of what’s ahead, feeling my knees buckle, the slightest feeling of nausea never far behind. I feel every bit as anxious as I am exhausted, but I hide it and keep with the task at hand: a grin, a nod, a walk down one of Portland’s curious streets. I stick to the conversation at hand. At any moment, I feel like I can almost fathom what I’ve just finished. 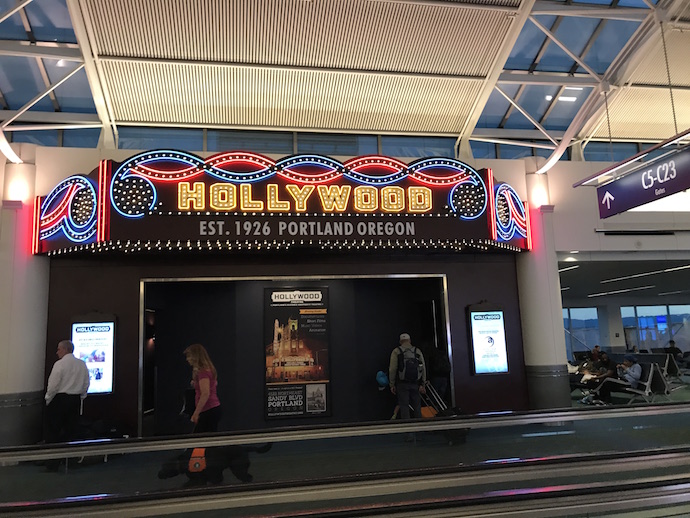 And yet, I don’t. It does not arrive; the reality of what I have just done has yet to hit me. Sitting here in the airport, many hours later, the day giving way to evening, the only thing that hasn’t betrayed me is that sense of displacement, of complete exhaustion. But I also know it’s foolish to disregard all the good, the grace from others, littering the road I had traveled to get to this point, the would-be end. I couldn’t have done it alone, and yet I can’t help but feel this way.

It seems so fitting I find myself wandering the halls, the stores, the all too familiar spaces of an airport, many hours before my flight departs, a redeye, a return to the place where I started, the place I am learning to call home. This is how it all started, so many years ago, the beginning of an idea born of social media so much it relies on social media to explore its own trappings. I lived in an airport for two days, livetweeting it every step of the way. It seemed as absurd then as it does now, but given how long ago it was—insane to think it was 2014, three years ago—and given what I had just done, driven across the country without knowing where or how I’d end up, social media as my compass, it only seems right that I am unable to wake from something that has asked of me every ounce of energy I can muster. 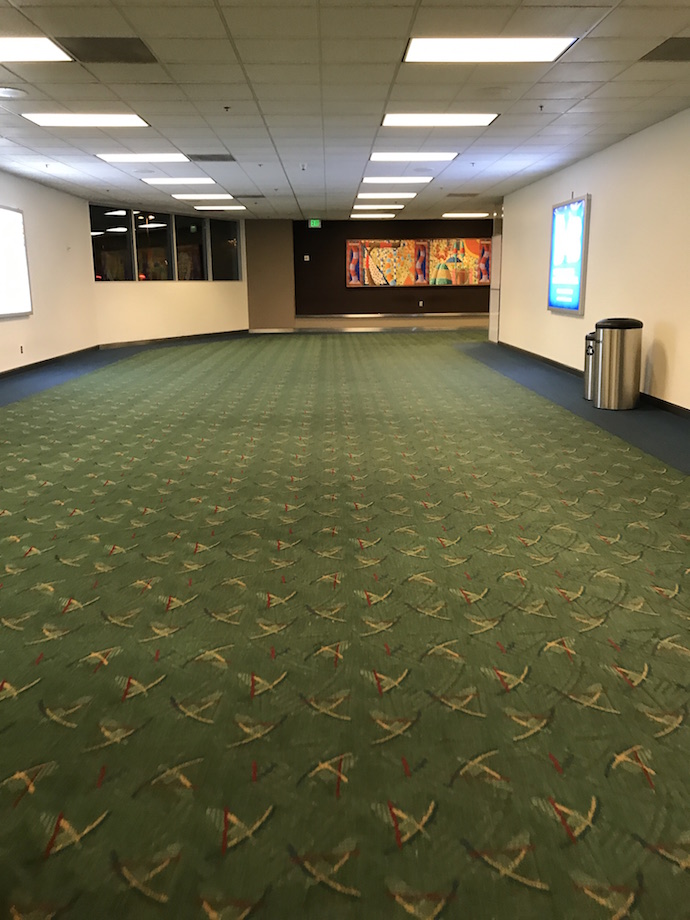 So I wander around the airport alone, at first disregarding everyone around me. I focus on the various marquees, the various stores, so many of them familiar—Potbelly, Starbucks, even a satellite edition of Powell’s Books—so many more of them an all-encompassing blur of consumerism. My mind looks for meaning where there isn’t, and even if there was something to ascertain, I feel nothing but the pain in my upper back, near my neck, telling me to stop walking and sit the hell down.

Get some rest. Pay attention to your body and what it needs. Instead, I keep walking, my eyes lowered to the ground and then, up to the make eye contact with those that walk by. Eye contact seldom lasts more than a second or two. The moment passes but the momentum persists. My wandering, I realize may be more to do with the fact that I can’t sit still. I still can’t sit still, not even when I’m falling asleep on my feet. I should be listening to my body.

In a moment of terror, believing I may have failed to find the right gate, and worse, my flight had already begun boarding elsewhere (you won’t get there in time, Michael!), I walk the entire length of the airport only to return to where my flight had always been, the knowledge I had known to be true, if only I had believed it. If only I had listened. Situating myself in one of the seats in the back of the terminal, nothing to do but wait until boarding and departure, I open my laptop and begin sifting through the notes I had written down. There are some, many of them repetitions of what I had spoken into my phone while on the road. I begin this essay, stop, look around at the people arriving, the people wandering by, and begin again. Though I have access to Wi-Fi, I ignore it. It has become strangely easy to ignore and push away what had seemingly always been at my side. 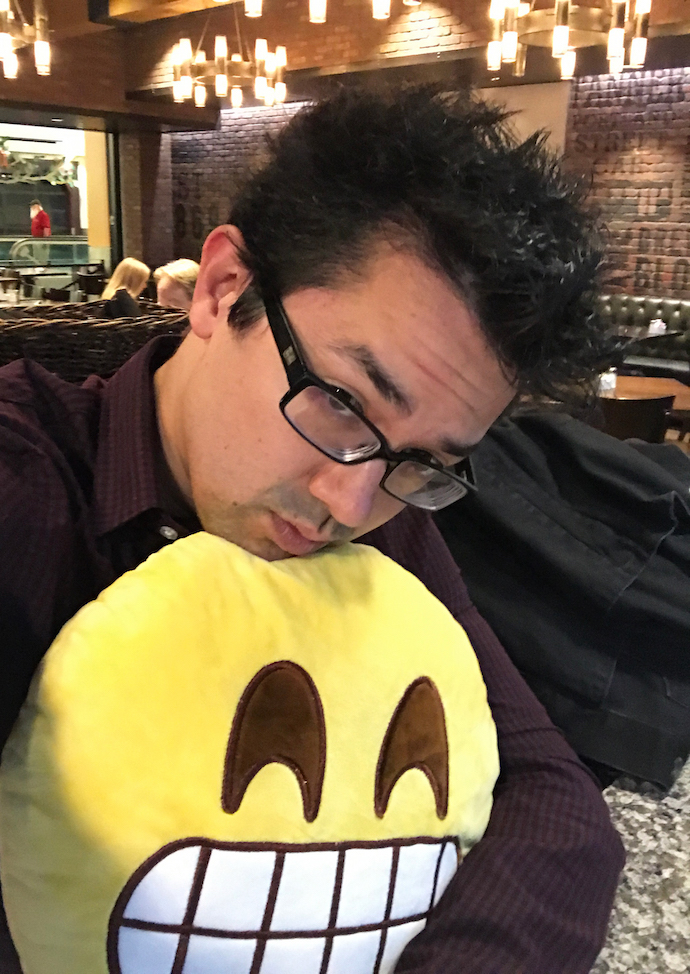 Social media continues but the notifications (especially the texts, DMs, and FB messages) are ignored. With a yawn, I feel the area around me spin, vision blurring. I close my eyes and keep them shut. One single moment becomes a full minute, a minute becoming five. I recognize this is perhaps the first moment of true stillness I’ve had since the beginning of the month. I haven’t given myself the chance to pay attention to my body, my mind. I listen to each breath, recognizing the same cough lingering from the bronchitis I had earlier in the trip. I feel pain in my jaw, on the left side, much like I had in the months leading up, a telltale sign of high stress jaw clenching during sleep. A worry takes hold: What if I’m clenching my jaw while awake without realizing? I push the thought aside.

Pay attention only to what I’m feeling right now. Listen. And then, with something as minor and insignificant as the sound of someone getting a notification, my attention wavers, eyes opening and resting on a very familiar scene: two people, sitting side by side, he yawns while she sets down her carry-on bag. When he speaks up, she yawns. He returns to his phone, another notification. She makes a joke about “silencing your cellphone,” clearly making a reference to those PSAs at the beginning of a movie feature at any movie theater. Without looking up, he says, “Huh?” Clearly not paying her much attention, she repeats the joke, once again getting nothing, not even a laugh. Not thinking much of it, she looks around the terminal and starts talking about maybe going and getting a drink, wondering if any of the airport bars are still open. He doesn’t respond at first, looking up from his phone long enough to catch her attention. “What?” She sighs, “Never mind. If I message you instead maybe I’ll get more of your attention.”

This isn’t anything new and it shouldn’t interest me, especially with what I’ve explored this month, and more so in the years I’ve lived online, and yet, aware of my phone in my right pocket, I dare not think anything less of the device. It is more than just a phone, a piece of technology; it has become as much connection as it is a means of circumventing disconnection. It’s my turn to yawn and I return to this essay; they don’t seem to notice me noticing them as they talk to each other via text, only ever regarding each other with the occasional word, a “yeah,” or an audible scoff and something dismissive like, “It wasn’t that bad.” Clearly, though they remain in contact, a mere text away, they aren’t really listening. 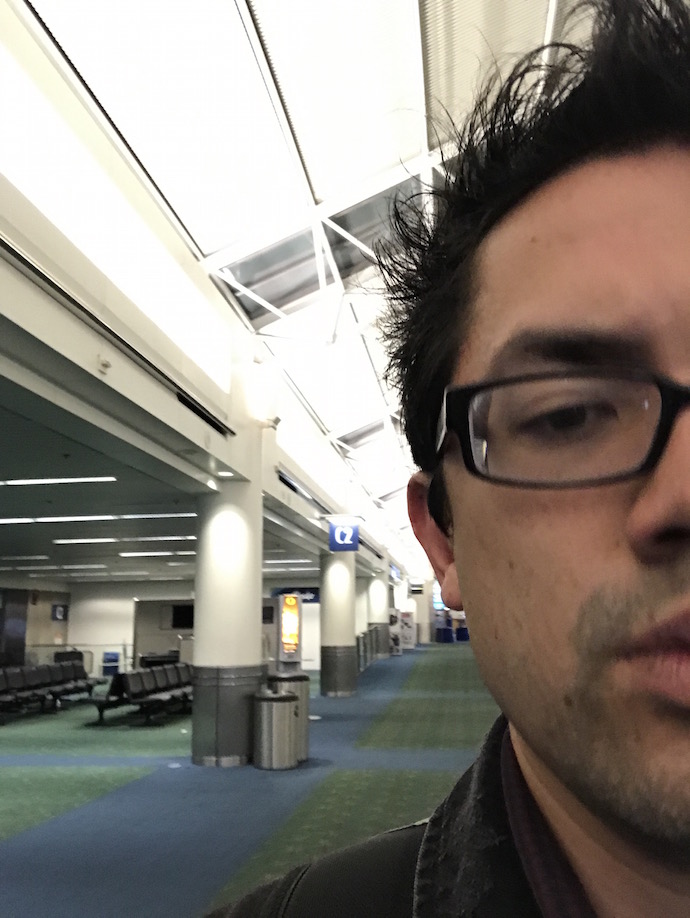 I stare back down at this document, this essay. I read one of my notes and it already feels so foreign to me, surprising because it was written only two days ago. So much has happened. I should feel something. I should feel like someone new. Where’s the revelation?

The shift in how I feel when reading and going over what’s happened in my head, it’s clear it’s somewhere to be found in the countless hours of sleep ahead, in the 11.5 hours of audio notes recorded, in the world that I’m rejoining after what feels, at once, a long time and yet not long enough. I sit and stare at all that I have documented, scrolling through the audio notes on my phone, playing them at random, listening to my voice blaring in my earbuds, surprised at how different I sound depending on the timestamp, time of day, topic, the countless factors at play.

I listen to one particular note, a rant, a ramble really, where I go on and on about the responsibilities that await me at the end of the road. Feeling smothered and outright on the verge of panic, I listen to all that is said. I recall where I had been as I spoke into the phone, somewhere just outside of the Bay Area, headed into Oregon. When the note is over, I play it again. The second time I listen, I pay less attention to what’s being said and more so in the tonality of my voice, the way it cracks, the strained rasp on the verge of being horse. I listen not to the worry in my voice but rather the wonder.

And then it comes to me: I am listening. It’s all here.

I wonder how much I’m leaving behind as I return to the life I had left on pause for this project. I wonder how much has left me while I was away from life for a month. I wonder what I’ll do with social media going forward, at once so much still to explore, to say and do, to take part in, while at the same time it feels almost impossible for me to post or tweet anything. It just feels like there’s nothing but silence upon being prompted. I wonder what I couldn’t capture both in experience and emotion along the way. I wonder how, and to what extent, my memories such will change when I return to them to write the book itself. I wonder how different of a person I’ve become in the month I have essentially spent in a car, and more so at all the pressure I’ll get from others asking for some grand and immediate revelation, like I can just go on the trip, drive across the country, and walk away from it with a bullet list of clearly defined self-manifestations.

I wonder if I can even show who I am—who I was, who I am now—in the book and to others, the people in my life that wait for me in NYC. I wonder what I have found and what I’ll find in writing the full book. I wonder if I’ll ever fully recuperate from the experience, especially the handful that grip hold, remaining so bold I can still hear, smell, and taste it. I wonder who will continue to follow me long after this trip has ended. I wonder if eventually all will be lost and I’ll once again linger on an idea that takes me to new corners. The point is I wonder, and instead of letting my attention wander away from any true feeling, I am staying put. I am listening.