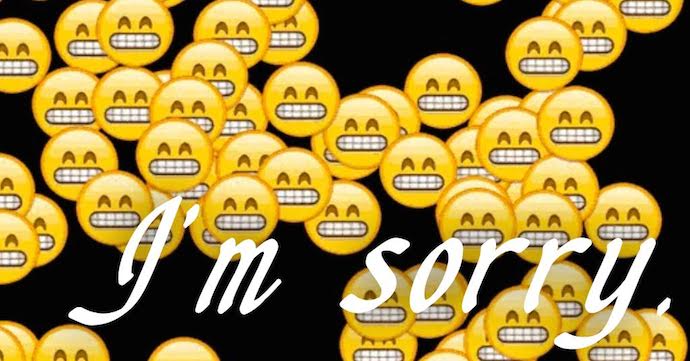 To those who will remain anonymous, and there have been many, I just wanted to say I’m sorry.

You have been there longer than most, not only to comment, like, and retweet but also to buy up likely the first, or at least among the first, copies of every book I publish under my name. I bet you pick up nearly every CCM title too. There isn’t a time when you aren’t part of the literary conversation and, more than that, you are living proof that good people still read good books. And yet as I got into my car that morning, racking my brain as to how, really how, I could stop in Denver and still make it to Los Angeles in time, I knew, deep down, I would let you down. When you messaged me back in disappointment, I felt it too. Worse than most, I want you to know that you are one in so many connections missed during this trip.

I’m pretty sure we’ve crossed paths on Facebook more than once, be it comment thread or the occasional grouping of writers tagged in a post or roundup as a means of literary citizenship. And I’m also pretty sure we’ve met in person, though I can’t recall exactly, and you made it sound like we talked at the AWP bookfair about, what else, books (because believe it or not, people still talk about books enthusiastically), but yeah, I couldn’t remember. I couldn’t remember when you messaged about hosting me, and I couldn’t remember after you made sure to tell me how much what I’m doing meant to you. You’ve actually read one of my books too. You were sure to make it clear that you think this is a book I am meant to write, something I am meant to do. I was flattered then, only to later be alarmed when the offer for me to stay in Nashville sounded more and more like a mistake. I didn’t want to let you down but I also couldn’t muster up the courage to tell you just how much the would-be situation, your offer, would have made me uncomfortable. Beyond that, I can’t stop thinking about the possibility that we’d both regret every moment.

It’s true: I should have stopped in Chicago. I also know that you reached out within the first hour of the announcement essay’s publication on Fanzine. I wanted to visit Chicago, the city full of so much excitement and I knew it would have been a blast. However, where I started the project, and where I needed to end up within the first week, logistically Chicago, like Detroit for that matter, became a city so far out of reach, I worried my not stopping there would be a glaring omission in terms of the project’s totality, the measuring of a social media following as visualized geographically across America. Maybe it’s true and this failure will be something I deal with as I write the full book, but that doesn’t change the fact that you were upset that I failed to stop by. It doesn’t change the fact that when I announcement I was in New Orleans, you messaged me asking if Chicago was “not worth it for [me].” I wish I could convince you I didn’t ignore your offer. I simply couldn’t make it there in time; however, the fact that you have stopped replying to messages, even though you’ve seen them, proves that I have let you down.

Look it doesn’t really need to be a big deal but for some reason I still think about it. We had planned on meeting up, if even for just a single beer, but when it was clear that things were taking a turn for the worse, and driving way off course, when really I should have been leaving Florida and heading west, finally leaving the east coast and heading more in the direction of completion, didn’t seem to mean much in the way of still meeting up, yeah sure, I don’t know where I’m going with this except that it really didn’t have to be a big deal. Somehow it still is, for me. Maybe it was bad timing and maybe none of this is a big deal; I can see that—like, who cares if some person from the internet is driving around cross country? It doesn’t affect anyone else’s life, especially yours. Being a fan or admirer brushed aside, there is, to a degree, an invasion of privacy to every offer, every path crossed, and that doesn’t work well for some. For most, maybe, even if it seems like there are so many possibilities. It always seems like too much to choose from until it’s clear that the highway I’m driving down is to nowhere, and that the text messages we exchanged went silent, ignored. So maybe I timed it wrong. Maybe it just didn’t seem worth it, meeting up, the two of us meeting in person for a beer. It’s probably true: There’s nothing in it for you. I guess I just wanted to tell you in person I really dug your books.

Boston is way up there, yeah, and your offer was, from the start, more a conceptual offer, a chance for the two of us to chat with each other when prior to this whole project, this insane and exhausting drive across the country, we hadn’t chatted. We still haven’t met, and I’m going to go out of my way and say we probably never will. But okay, we chatted about me driving up to Boston and then you driving all the way down to Florida with me, only to then have the conversation be more about how you’ll probably drive the entire way, relegating me to passenger seat. Admittedly, I thought about it for a second, because driving pushes me to the point of fear and frenzy, even now as I write this essay, after having logged in over 4000 miles, I still feel my heart beat faster, that tinge of sweat, the feeling of feeling faint, the first swells of nausea, yeah, sure I thought about taking you along, of both of us driving and taking turns, playing up that cliché from Jack Kerouac’s On the Road, but when you started to mention, at first jokingly, then later as a direct insult, how you could do this, complete this project and write a better book about it, I knew I needed to begin ignoring your messages. I didn’t, though: I’ve read them and you know that I have seen then, but I won’t be speaking to you anymore. I bet you’re talking shit about me, and I bet I’ll hear about it from someone else, but sometimes I have to protect myself, even if it sparks my imposter syndrome into thinking I’m letting everyone down, set for failure, bound to be a bummer.

The end is in sight. I mean, I still have so many miles to go, but yeah, the end is in sight. However, you don’t yet know that the end point of this project is a city and state before yours. Seattle seems so impossible, so far away, especially since the car rental ends in Portland, Oregon. It ends on June 30th, and still, the offer, your offer, one that sounds so irresistible and like a grand time, likely full of good brews, cigars, and the sort of conversation that lengthens out into late night, when everyone involved starts to fade, passing out mid sentence, and yet we still puff, still drink, I still know I will one day soon, maybe before or right after this essay is published, I will have to tell you no. I can’t go. I can’t make it. We might meet at a later date, be it a conference or some event in a city where writers flock to promote their books, to network, to tell themselves they’re more than capable of being both lit citizen and literary jet setter, we’ll probably meet that way. Or not. It isn’t the first time I’ve known someone online, got to know then so close, only to always miss our opportunity to meet in person. It’s almost like our friendship is an illusion, based around those late night rants about publishing and the doom and gloom of keeping with it, even when it feels like the chance to be more than just a dot, another indie author fighting to stay afloat, has long since passed; and maybe it is—maybe we will never meet, but I hope we can prove something to the world, to ourselves. I hope we can be far more successful than we currently feel. I hope we can meet accidentally, both of us entering a bar or reading without realizing, and the reaction will be every bit surprise as it is genuine smile. I hope so, because hope seems to be something easily lost these days.

I’m sorry. I really am. And to everyone, the many more, you all know who you are. I just hope you can forgive me for letting you down.