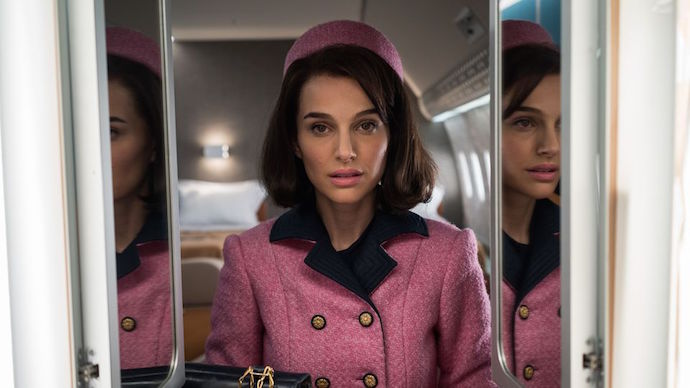 1. Mica Levi composed the score for the Pablo Larraín-directed, ostensible “biopic” following the First Lady Jackie Kennedy—played by Natalie Portman—in the seconds, minutes, hours, days, weeks after the assassination of her husband the president. The film is called Jackie.

2. Levi’s “Intro,” soundtracks the first shot of the movie in a scene that must have taken place about four days after the assassination, although the timeline isn’t apparent at the time. The strings are hypnotically unsteady, even unnerving. The listener is kept upright, kept from fainting—but only barely so—as a tracking shot cut into from black keeps pace with Jackie walking toward the camera, keeps her at a distance. The coastline in the background recedes.

3. Jackie was walking toward a quiet, cold, and safe house and toward an interview with a Time reporter. Think of the phrase “her own version of what happened.” This is not necessarily (or maybe not always) a framing device, and scenes jump back and forth through the timeline—days, minutes, hours, seconds, weeks. Regardless of what Time says, this movie seems to show what Jackie remembers.

4. In horror films, “the final girl” is usually the last character left alive. Having survived terrors of absurd violence and serious trauma, she’s often covered in blood, physically and emotionally scarred, and stunned at her own survival. The time between the moment that the character becomes “final” and the credits is often very brief. If there isn’t a scene pointing toward a sequel, then that’s it. For just a few seconds, she might laugh hysterically, scream or cry, or she might stare blankly into the camera.

5. What if these psychologically complex moments of abject reflection were stretched to the length of a feature film? What would that look like? What would it sound like?

6. “Empty White House” plays over an otherwise silent scene: Jackie, still wearing that pink Chanel now bloodstained, walks around what she had called “the people’s house” in a televised tour of which the movie shows recreated clips. The clips show an awkward, shy Jackie being reminded to smile while she details the history of a piece of furniture. “Empty White House” plays over scenes of a stunned, expressionless Jackie at odds with a home made strange, uncanny, a home not home that maybe never was. Now, there’s a paranoia, a sense of creeping horror which emanates from the chairs which hold among their fibers so much history as she knows so well. “Empty White House” plays like a haunted version of Samuel Barber’s “Adagio for Strings,” a song which played at JFK’s funeral (though not in the film). The song pulls back—just like “Adagio”—right before the sound overwhelms the listener with the dominant emotion. “Empty White House” draws grief, horror, strangeness up with the violin’s bow where it waits, ready to strike but silent, for a moment.

7. “Adagio For Strings” also played at the 9/11 memorial. Did that question “Do you remember where you were when…” originate with discussions of JFK’s assassination? So much of this movie is haunted by the things everybody knows. Bobby’s futile anger and harried scheming about his brother’s legacy are made eerie by the knowledge of his fate. The viewer knows how the television broadcast with Lee Harvey Oswald will end before the characters huddled around a black-and-white screen do.

8. “Adagio For Strings” stretched and slowed beyond its already mournful tempo might begin to take on the disorienting, shadowy tones of psychological horror. 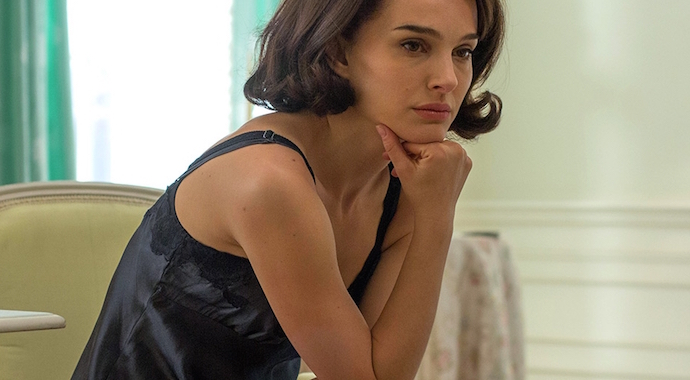 9. The scene in that bloodstained pink Chanel in the haunted White House ends in a peculiar montage in which Jackie puts on a record and tries on different outfits with different combinations of pearls, diamonds, pillbox hats. The record—one of the few sources of diegetic music in the film—plays in one room as Jackie moves between rooms. She seems to sleepwalk through half-remembered dinner-parties, drinking wine and setting places for ghosts. As the song takes over the soundtrack for this sequence, it sounds far away and washed out and imparts a maniacal air to Jackie’s mimicry. Grief is winding through her memories, threatening her psychological state at its most vulnerable. The distorted voice of Richard Burton singing the bouncy, idyllic “Camelot” from a gramophone rooms away is as obscure to the listener as insight into Jackie’s impenetrably shocked mind.

10. There are two jump scares in this movie. The first occurs when the Time reporter echoes the phrasing of Jackie’s own words and asks her “What did the bullet sound like?” The listener is shocked by a jump cut not to the sound of the bullet but rather to the sound of the roaring engine of that modified black Lincoln convertible carrying a dead president, a few secret service agents, and Jackie barreling down an empty recessed freeway in a shot vertiginously reminiscent of the opening shots of countless horror films: a zooming pan into ghostly woods toward a terror yet defined.

11. The second jump scare—a moment which elicited a shared gasp in my theater—occurs very near the end of the movie when Jackie admits to a priest played softly by John Hurt that she had lied about not remembering what happened. “I remember everything,” she says. Suddenly and quietly, the listener finds themselves beside Jackie in that convertible Lincoln in Dallas. She narrates from days ahead, telling the priest: “Boom. That first bullet,” a gunshot which the listener does not hear. The president leans forward into frame with his hand at his throat, the listener has seen this before, everybody has seen this before from ten different angles. Then comes the gunshot the listener hears, then comes the collective gasp. That thing everybody knows is somehow a shock.

12. “Burial” soundtracks the assassination scene and the scene which returns to that convertible black Lincoln roaring down that abandoned freeway, cutting back and forth between the visions of panic and bloody horror, her conversation with the priest, and scenes of a blackclad and veiled Jackie watching the burial of her husband. Bagpipes play, and “Burial” continues. The song maintains the doomed suspense of much of the soundtrack but is somehow warmer in softly diminishing notes as if there is some comforting release, a satisfaction in the slow revealing clarity of Jackie’s memory. These notes trace a slow zooming in seemingly simultaneous among shared scenes: closer to Jackie’s veiled face at the president’s burial and closer to her muted wide mouthed screaming in that bloody pink Chanel, husband’s head in her lap. Inside Jackie’s memory, pulled in by “Burial,” the listener is closer to Jackie than before and able to identify, no longer just following grief and abject horror, but confronting it from Jackie’s perspective.

13. Carol J. Clover coined the term “final girl” in her book Men, Women, and Chainsaws. Clover concluded that a key element of the final girl is a switch of the horror viewer’s identification away from a voyeuristic point-of-view which engages in the violence and an assumption of the point of view of the ultimately empowered final girl.

15. Pablo Larraín’s film depicts and confronts an ironic Kennedy legacy—men who scramble around reaching for lasting meaning are celebrated after their premature deaths—through the eyes of someone who was close enough to have seen everything. The film mostly rejects the conspiratorial bent of other historical films and the lurid all-access promise of some biopics. Without flattering any of its subject personalities—especially not Jackie’s—the film earns a kind of agency for its central figure, a feat aided greatly by Mica Levi’s score. The proximity of Levi’s music to the familiar moves and sounds of the horror genre ably facilitates the listener’s view of and part in that agency.

16. Bobby, mourning a potentially diminutive legacy more than his brother’s death, has an offhand line about how close they (the president and his administration) had been to “solving” Vietnam. Again, what everybody knows haunts heavily.

17. In the film, there’s an epiphanic brilliance to the way Jackie pushes the Time article toward a comparison of her husband’s presidency to the court of Camelot. The song “Camelot” plays again. The second time, Richard Burton’s voice rings clear, bright, and triumphant over a scene of Jackie watching department stores stock clothes reflecting her now iconic look. Jackie Kennedy becomes a style and a haircut projected onto countless mannequins—free of bloodstains, of course. The listener partook in surreal horror, shared in intimate grief, and now absorbs this uncanny and somehow comfortingly gaudy fantasy that it all symbolized something, something like power. Access to this fantasy is a trick of lights and sound.

18. The film’s final scenes return to memories prior to the assassination, resplendent memories of that presidency’s Camelot set in gilded ballrooms reflecting the shine of the bright clothing of the members of the court waltzing through them. Horror films so often end with the promise of a sequel, a new monster capable of greater damage. The stroked egos of the former and future inhabitants of an office which seems to be fundamentally destructive promises new victims and that a retold and retold version of the events to come will come—almost certainly and predictably not from those victims, but from those fortunate enough to survive.