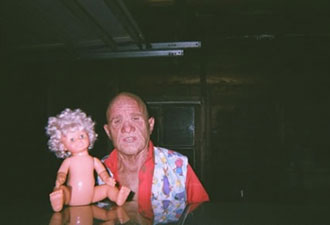 A sexual, incantatory, violent nightmare. Four devils wander through a largely deserted rural landscape and its interiors destroying objects, tap dancing, doing yoga, humping trash receptacles, interacting with a handful of residents and filming it all. The dialogue, such as it exists is both childlike and abusive. It often feels like the spewing of a mind unfettered by thought. The internal spaces are largely decrepit and more often than not serve as locals in which the trio of trash humpers torture and murder the inhabitants. The scenes out of doors at night feel like they take place in one enormous claustrophobic space. The day feels like and empty shadow of night. Rachel Korine’s makeup literally makes her appear as a corpse come alive and her close ups in the final scene are what make it as deeply disturbing as the most realistic nightmare you’ve ever had. A horror movie minus all the filters that ‘tell’ you to be horrified like music and effects and editing, Trash Humpers is deeply magical, and Harmony Korine’s purest film to date. ––Mark Gluth