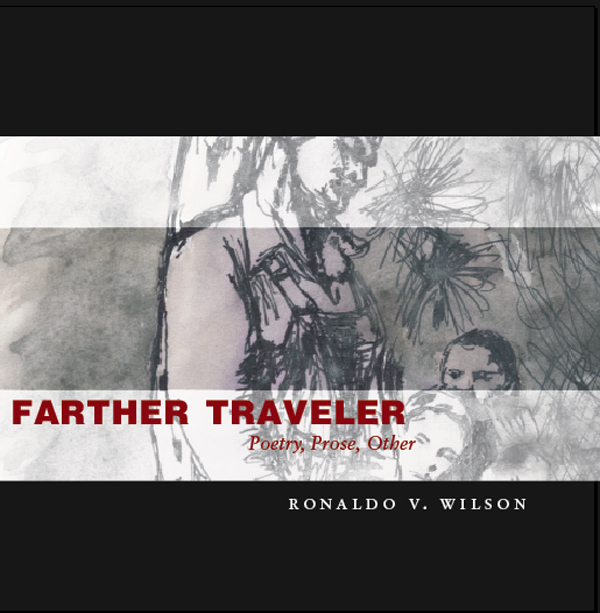 You read Ronaldo V. Wilson’s Farther Traveler, and your life has to change. You have to reproach the ways in which you’ve engaged with race, the institution, desire, death, and illness. Wilson’s rigorous efforts bend these spaces until they collapse in on themselves; from the rubble comes a collection that doesn’t just engage the complexities of the apartheid imagination; it chokes them out with a fierce grace.

Wilson’s explorations of Black identity are thorough and touch upon real truths other poets won’t or can’t engage. Farther Traveler does not shy away from disfiguration, but instead leans into this uncomfortable glow— Farther Traveler asks you to rubberneck, to cause a traffic jam in contemplation of the event; the pleasure derived from trauma and its farther reaching affect upon the bodies present. It’s a song of the decolonized body that doesn’t need to utter the word once: the text acts as a sharpened meditation. It’s not simply a documentation of micro-aggressions, but an account of the inner alchemy of the body undergoing the racial injustice.

“My oppression one says, I must make beautiful.”

The energy amassed within this book feels like a comeback, though, Wilson never went away–he simply took on a mercurial form, engaging video, dance, and performance—and as Farther Traveler shows us: the essay. The PROSE section is framed by an Adrian Piper epigraph, “….I become identical with the artwork, and the sequence is shortened…” In a way, this simple line helps to frame the entirety of the collection; Wilson doesn’t simply provide a trace of a farther traveler, he provides, the body, its bruises and scar tissue, still breathing. The poetics statements contained within Farther Traveler are the components that allow the reader a navigation of the surrounding content; it’s a context through which one is able to engage the entirety of the text.

“I want to trace a set of aesthetic instances where my body touches language, where desire delineates in form, from sleepy stupor to drawn subject. What enacts when I let go is what releases when my body reacts, giving up as I linger in the screen, nest, down the hall, or on the gym shower floor, my senses open to the poem that comes.” (Poetics in Red Wing)

Wilson’s efforts here reflect the living body, its accumulation of experience and language; the choreography moves through the form’s poem, sentence; paragraph and drawing, but the vibration of Wilson’s physicality are never far from the page.

Wilson’s jettison from traditional approaches to manuscripts also speaks to the poet’s mastery of form. I’m reminded of Pina Bausch, and how Wilson accesses the same sort of magic that transcends the unexpected. Bausch, a choreographer and dancer radically impacted the spectrum of modern dance, freeing the body of the dancer to dare, to experiment and dream aloud. It is this unconventional uncanny energy that permeates the book; it’s why I keep returning to the text. Farther Traveler functions as a container for Wilson’s own ever-evolving praxis of identity/persona performance and improvisation; it’s a container that manages to hold and examine that which spills.

“I choose poetry to explore the limits of a fractured self, always on the mend, or I write how the fracture looks within the assumptions of a shifting poetic stability, though I do rattle some deep belly blues song, once in a while, as it belies my complexity to balance the same self that imagines at this point that it can say this, and looks out of the window into the memory of saying close to exactly that in the Skype screen where my background is constructed behind me, so in front of you, you will see a stack of neatly ordered books. “ (Poetics in Delusion or After Bitterness)

Farther Traveler is foundational in its unrelenting ability to traverse and destroy the boundaries between genre and language, forcing the reader into a chokehold of pleasure, and trauma, so that we might arrive at the precipice of a Fanonian dance, crafted for the body beyond language. I think that’s where Wilson truly shines, through this uncanny ability to elevate the quotidian, bringing a razor sharp critical eye to subtlety shattering the ceiling of the institution.

“Song” from the first section:

Hold it down.
You’re not a slave,
on slave wages.

Farther Traveler is unlike any other collection I’ve encountered in that, when I enter its world, I can’t bring myself to look away; I have to inhabit that body that pose that language in such a way that everything else is on pause, and the only sound is that of my own organs, and I recognize my blood in the book; the kinship of exhaustion in the face of continuous racial oppression. Farther Traveler is not a response to the present, but a message sent from the future, from a farther traveler who’s been there, seen that and wants something better for/from you.

Wilson does not present a David from marble—instead we encounter a durational meditation on what Wilson terms “the Black fragment” and its place in the world.

Wilson’s treatment of the Black body in academia poses a reality that requires the reader to consider their own framing within the institution; Wilson does not let up. Farther Traveler is a measured composition of articulate rage, grief, trauma and pleasure—Wilson’s contemplation provides us a rough reality to confront. The examination of power and race are curious, Silver Daddies coupled with the overwhelmingly white walls of academia; the Black body in search of pleasure becomes fetishized and yet remains expendable despite intellectual prowess.

RVW’s investigation of the Black fragment identity posits a far more complex treatment of race and identity within the apartheid imagination. The body of the artist is present throughout the collection; the watercolors reveal a poetics of gestural lineation upon the page. Coupled with poems, the sketches presented in FORM reveal the artist in a unique light, adding another dimension to the rigorous aesthetic of Wilson’s tremendous body of work. The sketches and watercolors hold a quiet violence that sits with you. The final diptych in particular, Exhaust, which also provides the cover image, depicts children gathered around the body of a Black man who has been lynched. The accompanying poem provides a deep silence:

Old, a proximity to black,
like if you’d called me old.

Old like you are old,
We’ll both get old.

Old, we won’t get black,
This won’t exhaust.

Wilson refuses exhaustion. Within the collection, Wilson lets the body be a body, its flesh bruises, swells and rots. He does not belittle the body to a theoretical concept. He places his own body upon the pages to bleed reality; this is why you can’t escape Farther Traveler. It’s real.

To speak of Farther Traveler is to also speak to Wilson’s explorations into performance, video and the visual arts. The letters to Wilson’s cat, Ally, became a short film, Forever Ally, by Iyabo Boyd that went on a successful tour across film festivals in 2015. Wilson’s short film, Grey, created during his time at the California Center for Art and Thought won best art film at the Fast Film Festival in 2014. Wilson has this uncanny ability to activate a multigenerational presence within text and performance, maintaining the intimacy of the family alongside its fractures. Wilson provides a spectrum through which we may begin to reassess our own fractured experiences, however distanced by time and space they may be. Farther Traveler is like a Saturn’s return: the universe shaking you up to return to the person you’re going to be for the rest of your life.

The final section MEMOIR begins with an epigraph from Gwendolyn Brooks:

“I shall Create! If not a note, a hole.
If not an overture a desecration.”

Indeed, Wilson provides us the abyss of a wound, which we are invited to peer into, and contemplate. It’s not a wound we can heal alone, but Farther Traveler offers a song from the front lines, an invitation to confront and examine ourselves and our body’s traumatic music of discomfort and pleasure, in hopes of becoming something else, something more.

Angel Dominguez is a Latinx Los Angeles born writer and performance artist forming Dzonots with notebooks along the California coast. He is the author of Black Lavender Milk (Timeless Infinite Light, 2015), an experimental lyric-novel that functions as an extended meditation on writing in relation to the body; time, loss, ancestry, ritual and dreaming  His work can be found in The Berkeley Poetry Review, The Bombay Gin, and online at Open House Poetry and spiralorb.com, with work forthcoming in FENCE. He was the co-founding editor of Tract/Trace: an investigative journal, and presently curates the ongoing series: Bodies/Pages. Along with Hannah Kezema, he co-founded the performance art collaborative: Dream Tigers.