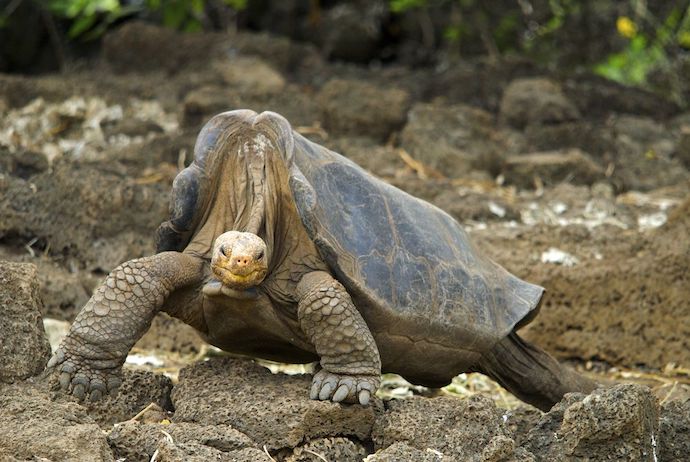 I saw Lonesome George. Taxidermied, preserved, in a temperature and light controlled room. As though Isla Santa Cruz was not under and around. As though the sun did not shine hard on that equatorial island.

As though time and the earth were still.

As though the world was not outside the door and evolution not just another word for pain, starvation and death.

Endling. The end. The last. The loneliest.

It’s not Lonesome George who does not know he is dead. It’s we who refuse to accept extinction.

He was alone when he was found on the island in 1971 and taken into captivity.

But you know this, right?

The pirates and the “more legitimate” sailors stripped the Galápagos of the slow-moving creatures. Lay them on their backs on the ships.

The tortoises exceed in sweetness, so do they in numbers, it is incredible to report how numerous they are.

A living tortoise on her back is preserved, immobile, for days, for weeks for months.

Someone has vanished because he was shown the right way

He was there when the other tortoises starved to death or fell into crevices because the brush was so dense after the rains they did not see the traps beneath their big solid beautiful feet.

Someone has vanished from somebody he usually walks with

Multiple teams searched the island but he was the only one left.

Someone abandons his house and never returns to it.

Ghosts don’t need to arrange their meetings, but for you it’s still necessary

I visited the Galápagos with my children in December 2018. A month later the New York Times published an article by Adam Popescu highlighting the concern with the pressure tourism, especially land based, place on the islands.

As noted by Popescu, More people on the islands means more pressure on existing infrastructure, encroachment on animal habitats and a heightened risk of introducing invasive plant and animal species.[2]

True, of course. But what is also true was that Mr. Popescu was traveling himself as a land tourist and much of his article was about the ugly behavior he witnessed. Anecdotes about people getting too close to tortoises and getting pissed off because a sealion would not pose.[3] We did not see that.

But. I know we brought damage. A human is vermin.

The gaze wants to immolate

Before I traveled I was told that the Galápagos was “Disneyland for adults.” That was not the first time I’d heard that description. It bothered me, gnawed at me. What does that mean–I asked myself and others–what does that mean and why do I feel it chewing at the back of my mind.

In the end the best feel tired. The strongest supports are missing.

It became obvious a day into our trip. Because Ecuador tries to control the impact of people on the island you need a guide for much of it and the islands are divided up in a way that might feel, if you’d not spent your young adulthood studying evolution, as though each place you visit is a sort of ride in a theme park.

This is pure animal as object.

We come upon the world with eyes obscured. With eyes inward.

This is nature as zooland. This is ignorance afield.

We trample the tiny blue flower because we did not see it.

If you know me, you know that I see every creature as its own kingdom. I cannot go to zoos anymore because they break my heart.

My body is a graveyard

Perhaps I should tell you explicitly about that old female tortoise pulling back into her shell with a hiss. Perhaps I’m about to fail her and all of those beings that are not human by talking the human experience. But I’m not ready to talk about that.

My heart’s an empty pail

I am still trying to find the language–hiss.

Animal appears at the very heart of oblivion

Here is the human experience that I loved on our trip.

My son, standing quietly watching the tortoise, watching the marine iguana. His quiet joy. His awareness of the creature as a fully embodied being in her own world.

The sky is vast and wide

My daughter, snorkeling with such grace–sighting a leatherback turtle. Sighting an eagle ray. Keeping her body perfectly held in the water column so that she touched nothing, disturbed nothing. Utterly aware of all of the beings existing in the space around her.

My children did not view the Galápagos as Disneyland. They viewed it as a privilege. To be in that space. To be there as gently as possible. To be in moments of communion, perhaps, with the dead and the living.

They exist, and the sky is vast and the earth wide,/and our hearts the size of a clenched fist

The tortoises the sailors didn’t take presumably died in the crevices, died of starvation. People introduced feral goats who stripped the island of vegetation.

Because there are men who don’t understand its language

It is not the goat that is vermin. It is the human. My children are my heart in the world. I sat crying while I looked at Lonesome George.

The last time a human saw a Fernandina Galapagos tortoise was 1906. Until 2019. They knew because there were signs. But it took some searching.[4]

To aim straight for your heart

To find green patches amidst the lava flows. To find the tortoise bed in 230 square miles of island. To see her resting in the vegetation.

Fernandina Galápagos Tortoise. 100 years old. Or more, perhaps a tiny tortoise in 1906, when that last giant creature of the island was spotted.

one of those who died already

Our sense of the world, its biological components (me, you, that sweet tortoise), shifted once again. This time towards hope.

Leap says the world and I fly

[1] I think the loneliness was perhaps a little less because of Fausto Llerena. But that may be about the need to relieve an ache.

[3] Of course, it is worth noting that the New York Times published Popescu’s article warning of the impact of land tourism in the Galápagos a year and a half after it published an article discussing how island hopping was the cheap way to travel.  Allison Amend, In the Footsteps of Charles Darwin, 06/20/2017.