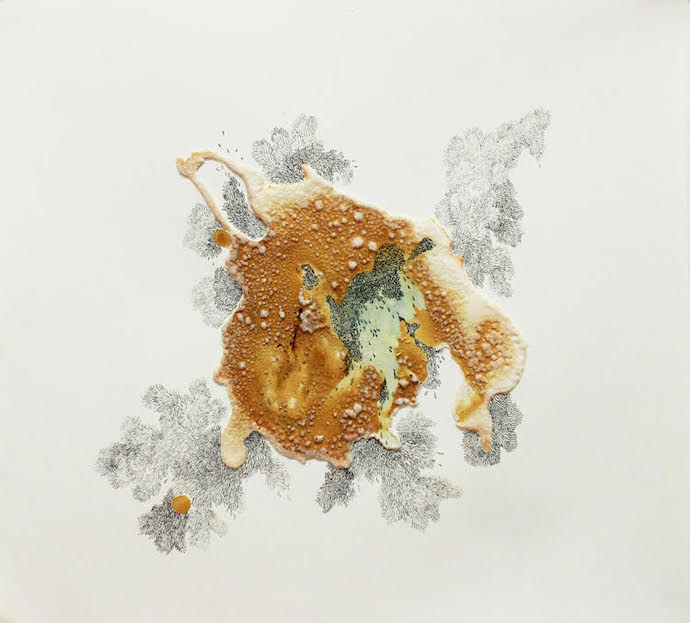 “The Stain of Forgetting” by Sara Jimenez (used with permission)

We collectively recall standing in front of windows waiting for our father to return. He never did. In this recollection, we are young and alone, and although I cannot picture your childhood home, I can describe mine to you. Picture, if you will, an 8.5″x11″ landscape photograph. In it, I am eight years old and standing in a living room the approximate size of my living room, a living room you’ve visited and can therefore vividly imagine via the power of your third eye. The dimensions of the past are difficult to discern vis-à-vis the photograph, for the photograph is flat, unlike the present, which is three-dimensional and accented by a jute rug partially concealing its hardwood floor. The living room in this photograph has no jute rug; its hardwood is exposed. I recall getting splinters in my feet from it. I also recall the entertainment system in the center of the room, pressed up against the wall (the color of an egg), and a record player with no speakers attached. In a corner, a record collection exists, about which I recall very little besides the fact that it contained records by the Talking Heads, Dire Straits, The Smiths. My parents listened to this music, and so I listened to it too. And now I am thinking about R.E.M., because I loved “Losing My Religion” and would sing it alone to myself in the living room.

There was a staircase in the living room, and I would often stand at the top of it and pretend to be a student. I wore a light grey sweatshirt that read University of Pittsburgh and carried a backpack, and also wore black leggings and sneakers and my hair in a loose bun. My hair: no one brushed it until it became infested with lice. My mother said the lice meant my hair was clean. But I have no memory of washing it. One memory I do have is of a bathroom where a colony of ants once descended upon a bowl of honey I placed next to a void. In this scene, I am naked in the bathtub while my mother announces her father is dead. I am not yet eight years old.

Sometimes, I experience my body as a sheet of paper, and this feeling induces the sensation of slowly disintegrating in water, red ink bleeding out like the menstruating child I am. When my period arrived, it was December 13, 2000, otherwise known as Doe Day: the day hunters weather snow to slaughter female deer. I was alone in the bathroom, pulling down my underwear. Red is the color of blood, apples, Santa, and the Republican party.

But back to our father. He never returned, so submerged in our collective unconscious is the distinct sensation of being flayed by his absence. As our mother telephoned the cops to ask if dad was dead, we observed her from the hallway adjacent to the den, which is not akin to any room in the apartment I currently inhabit, but is instead its own ethereal world. This may well be for the best. Our first pet, an orange fish named Goldie, died in that room. Our father overfed her, an expression that encompasses how the love we give to one another smothers us to death.

Once, I watered a houseplant so many times its leaves turned yellow, then began to fall off, one by one by one.

Once, I told someone I needed him. Shortly thereafter, he left.

Once, a stranger said he needed space. We were entangled in bed, my arms wrapped around him. On the opposite side of the wall, a bathtub spigot was broken. Hot water dripped out from it like a weeping infant.

Once, I typed all of my secrets into an anonymous Internet survey. After I was done typing them, I pressed ‘send.’ Who, I wonder, was the recipient of my shame?

Once, I tried to love someone whose heart was comprised of decay. I convinced myself this love was unconditional, and let him call me names.

I listen to a song about a drunk who tells someone for whom he feels affinity to fuck herself. Then he calls her beautiful. I get mean when I’m drinking, he says. But sometimes I get really sweet.

I cannot reconcile the tender register of my body fitting into the drunk’s with the psychosis of his speech.

In a state, the drunk is playing video games. This practice, he reports, absolves his body of stress.

In the past, my mother is playing Super Mario World. Her avatar is Mario—a miniature Italian protagonist dressed in red, with a black mustache, who rides on an imaginary creature named Yoshi, a pseudo-dinosaur that lays eggs. From an aerial perspective, I watch her vanquish demons using only a Super Nintendo Console. I observe as she saves the Princess who is being held captive by an evil turtle named Bowser. Bowser hovers in the air in a contraption that resembles a flying car without a hood, and he throws miniature wind-up turtles to Mario, who crushes the turtles and throws them back up into the air, hitting Bowser on the head. Eventually, Bowser retreats. An array of anthropomorphic fireballs descend. Mario dodges them, then Bowser returns. The wind-up turtle sequence repeats until it ends, at which point Bowser’s contraption turns over. The Princess, clad in pink, floats down.

Mario’s adventure is over, a caption says. Mario, the Princess, Yoshi, and his friends are going to take a vacation.

I sit next to my mother on the floor and watch her play Super Mario World. I hold one of two Super Nintendo Console controllers in my palms and press its buttons to mirror the moves my mother makes onscreen. She may be far away, but via this controller, we remain connected.

Tonight, you and I located photographs of our father in my laptop computer. We placed them side-by-side. Alcoholic, you said, looking at one. Workaholic, I said, looking at another. Then we looked at our father together in a moment that comprised a diptych. In it, we were two fictional sisters inhabiting real life.