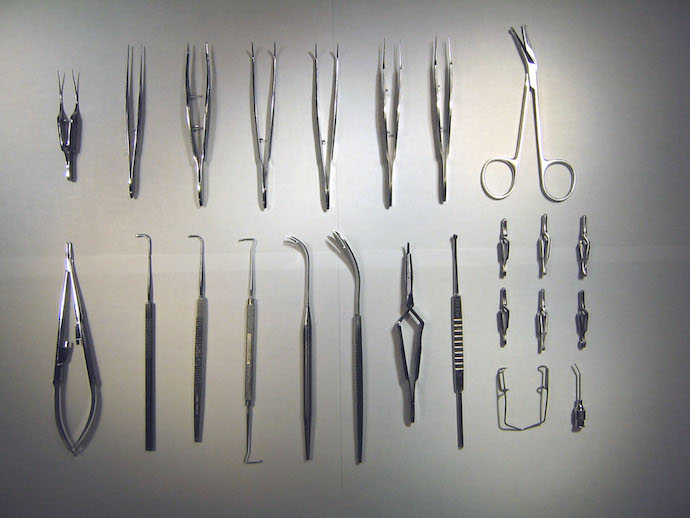 Joan went to see Dr. Dangle about her wrist. A cyst had appeared. It was hard and caused no pain. When she imagined someone rubbing it with his thumb she wanted to kill him, the dark shape she slept with. Joan had never slept with anyone.

The county clinic was behind Big Star. The waiting room chairs were a derelict pink rubbed white in the seat. Behind a glass partition a row of women worked soundlessly. On the counter they had put two urns of fake-colored flowers. All around the waiting room were strange objects full of water. Joan looked at the ceiling. It leaked.

Near Joan was a boy in his late teens with a baby. “Here, talk to it,” the man said, holding out a cell phone, and a woman’s voice scratched against the speaker. He adjusted the volume to make it louder. The Duck was Out of Luck, the woman read. The baby picked up the boy’s wallet and flung it at the wall. “Excuse me,” the boy said, and put the baby in Joan’s lap. He retrieved the wallet, then held up one finger and disappeared into the bathroom. The baby gripped Joan’s neck. Joan could not believe it. No one was doing anything about it.

The woman’s voice continued on the phone. Joan sat very still and did not make any noise. She felt that the baby was cheating on the woman and should feel ashamed. It had been raining and the hillsides had washed into the road in front of the clinic. Joan watched the cars swerve into next lane. Her name was called. She put the baby on the floor.

Joan was led to a room paneled in pine. There was a diagram of fetus next to a diagram of a foot. There were dark spots in the light fixture. She leaned back on the paper sheet. Joan could hear the sounds of the nurses’ shoes in the hallway. It seemed to take a very long time.

“What baby,” the nurse said.

The nurse grabbed Joan’s wrist. “Wow,” she said. “This one is really huge.”

“Are you sure there wasn’t a baby,” Joan said.

“We are not allowed to discuss other patients,” the nurse said, “Although, sometimes. You would not believe.”

“You must have worked really hard to get it this big,” the nurse said.

She left, and Dr. Dangle came in. The room was cramped. He grabbed Joan’s hand. She noticed, with horror, how long her nails had grown. She had not cleaned them. He flexed the hand back and forth.

“You are very talented,” he said. “This is the largest I have ever seen.”

“Do you play tennis?” he asked.

“Play the trombone?” he asked.

“Whatever you’ve been doing, it has overexerted your joint. It has filled with fluid,” he said. This was a conversation they repeated every few months.

Dr. Dangle reached for the syringe.

Joan knew, and Dr. Dangle probably smelled, that Joan masturbated four times a day with her right hand. She was conscious of the silken residue on her middle finger which never fully rinsed off. She thought of this each time she shook hands with an adult. Dr. Dangle stabilized her wrist by placing it on his thigh. He stuck the needle in. He appeared to have flexed his thigh. Joan inhaled.

“Do not move,” Dr. Dangle said. “You will upset the needle.”

Seconds passed. Joan’s hand sweated. She was afraid it would leave a mark on his pants, which would show when he walked down the hall. The syringe filled with pale yellow gel. When the cyst had flattened he put her hand back on her knee and patted it.

“Have I let you feel it before? The fluid?” he asked. He took Joan’s other hand and discharged the gel onto it.

“Slick,” he said. “The most perfect substance in the world.” It was. Joan rubbed it on her fingers. Clear, and smooth, without any trace of blood. He threw the rest in the trash and left her sitting there with it on her hand.

The waiting room was empty, and it had gotten dark. Joan looked under the chairs, but the baby was not there. Leaking water plunked into a bedpan. “See you next time,” the row of women said.

Joan drove back down the county road to her mother’s house. Her wrist was bound in black tape. “Oh,” her mother said when she saw it. She was reheating dinner in a plastic tub. “How was he this time?”

Joan went to her bedroom. Her mother had folded a stack of laundry on her dresser. Joan put her things away, avoiding her right wrist, which had begun to ache. As she did this she noticed that her mother had folded some of her own panties in with Joan’s. She did this often. Maybe she thought Joan would want them, would wear them to school under her skirts. They were years old. They hung in limp strings, stiff between the legs. Joan extracted them one by one and threw them in the trash, heaps of pink silk and stretch cotton which her mother would bag and take out later. It was a small ritual they no longer noticed.

Sara Kachelman is a college student from Alabama. She has fiction forthcoming in DIAGRAM and the Portland Review. A full list of her stories can be found here: https://sarakachelman.wordpress.com.