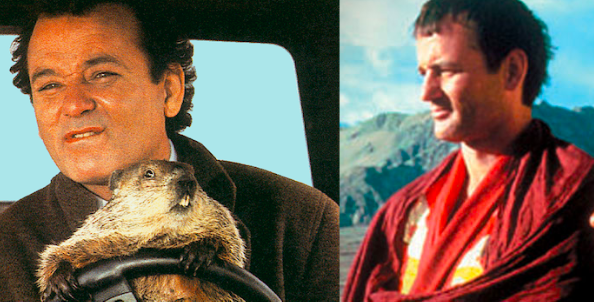 In his book, Two or Three Things I’m Dying to Tell You, Jalal Toufic puts forth the idea that you can watch Hitchcock’s Rear Window and Vertigo as one long movie, like watching The Wizard of Oz to Pink Floyd’s The Dark Side of the Moon or playing The Beatles’s White Album over Snow White. But no combination of connective media is more instructive that watching the movies The Razor’s Edge and Groundhog Day in conjunction. The one is not a continuation of the other; rather, they form a kind of back and forth dialogue, from which some compelling connotations can be applied.

Where Jimmy Stewart was the common actor in the Hitchcock films, Bill Murray appears in this integrated double feature. The Razor’s Edge shows Bill Murray (henceforth, Bill1) as a young man who drives an ambulance in WWI and, having come close to death, cannot return to his routine life and path he had been on and so he sets off on another course to discover himself. Meanwhile, Groundhog Day’s Bill Murray (Bill2) is a miserable, hated man whose only desire is to climb further up the ladder of routine drudgery, which is his definition of being a weatherman. He is sent to cover the yearly Groundhog Day celebration only to become stuck on a loop of repetitions of that singular day, during which he discovers the path out of his routine.

“I’m not happy. I can’t make myself happy,” Bill1 says in The Razor’s Edge referring to himself in Groundhog Day as well. As Bill1 will learn later, his (Bill2’s) work has no intention and is empty. The job of the weatherman is based on patterns in nature, but Bill2 is not attuned to them. He tries to predict and control natural forces (e.g., blizzards, time), but discovers that he is not in control. Bill1 abandons his vocational calling before he can get caught up in it, but he was on a track towards the stock market, a force as unpredictable as the weather, as is later evidenced by the stock market crash. Bill1 opts rather to work at the fish stalls with the commoners, but he still has no intention. He still lacks focus. It is only later, after he returns from the mountain, that he can go back to the fish stall, if not the stock market, and work with intention.

Bill1 is much more aware and self-motivated than Bill2. For Bill2, everything is learned the hard way through repetition.

“I got a second chance at life,” Bill1 says, but it takes Bill2 forever to even take the repeating days as a gift instead of a curse.

“I’m not gonna live by their rules anymore,” Bill2 says, and that applies to Bill1 as well. They’re both trapped in a dead rote repetition of values that they themselves do not possess. Bill2 begins to act out as if there were no consequences, driving on the railroad tracks and eating whatever he feels like. Bill1 moves to Paris, then takes a pilgrimage to India.

Bill2 falls in love with the new producer of his television station (Andie MacDowell), and over the course of months of repeated days, attempts to study her like a book. He has one nearly-perfect day with her but he can’t quite close the deal. He still isn’t being honest, and each subsequent day he loses more time until finally he loses her altogether. This echoes Bill1’s engagement to Isabel whom he loses as well. Bill1’s engagement was based on false pretenses. And, although he learns more and more that his path is different from hers, he tries to hold onto her and bring her with him until finally he loses her.

After they lose their first loves, the Bills are required to strip themselves of everything. Bill1 isolates himself with monks on a mountaintop and Bill2 enacts a series of ineffective suicides. When the Bills return from these experiences, they are purified in a way and they begin doing good for others: Bill1 is able to cure his friend’s headaches by hypnotizing him, Bill2 helps a number of people, even saving some lives. Bill1 rescues his friend Sophie (the corollary for the Andie whom Bill2 successfully woos) from drugs and prostitution.

Both Bills burn the books they’ve studied; Bill1 his actual books in an actual fire, and Bill2 selflessly giving up his dogged pursuit of Andie.

But the two movies split at the end. As Razor’s Edge winds down, Bill1 is alone, having lost everything. “There is no payoff,” he says. He thought, like Bill2, that by doing good deeds he would be rewarded in this life. Despite that Bill1 had started off further along the path than Bill2 and that he had more self-awareness, he had nothing more to show for it at the end of the film.

But at the end of their respective films, Bill1 and Bill2 are the same. They both have a newfound acceptance of the patterns of life. They both are seen walking upwards into the distance, Bill1 literally climbing a stairway that appears to vanish where the sky starts and Bill2 walking towards the horizon if not exactly the proverbial sunset.

The cyclical nature of time in Groundhog Day and the up and down wandering in The Razor’s Edge reflect certain shared principles, as such: the meaningless nature of human struggle, the eschewing of knowledge for its own sake, the renunciation of the ego, and the virtue of selflessly helping others. It makes sense that such principles echo back and forth between two movies that might otherwise seem unrelated, but seen together, the message becomes actualized, enhanced. The seemingly meaningless nature of war, making money, the weather, unrequited love, the whole range of human emotions, etc. does not have to be a downer. It makes everything an equal playing field to pursue the things that do matter. Enriching the soul, helping others, renouncing the self and imbuing the work of life with intention.

“What would you do if you were stuck in one place and every day was exactly the same and nothing you did mattered?” Bill2 asks.

Bill1 answers him, years apart, “You just don’t get it, do you? It doesn’t matter.”