DEEPER WAYS OF NOT BEING ANYTHING: A CONVERSATION WITH SOPHIA KATZ 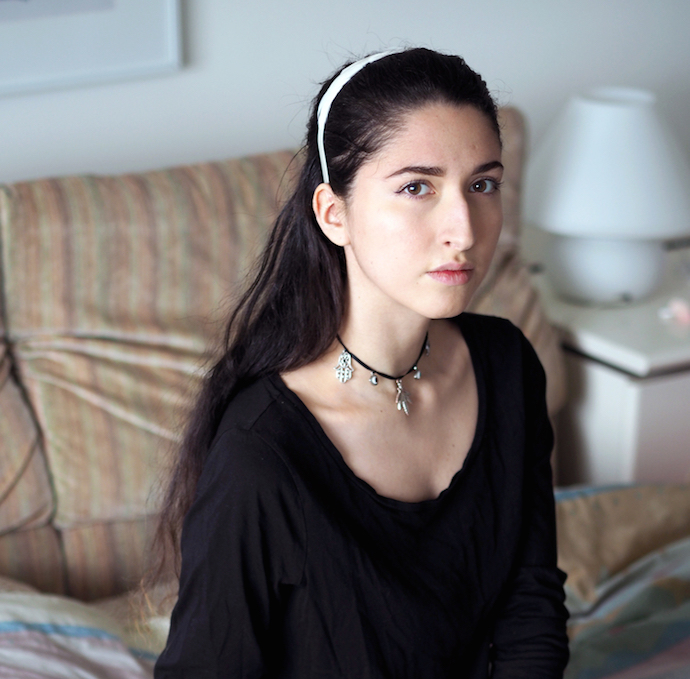 In February, I travelled from Montreal, Quebec, where I live, to Windsor, Ontario, where I don’t live, to perform at things with Sophia Katz, a 21-year-old Toronto-based writer whose debut collection, The Title Of This Book Is An Inside Joke, will be published this month by Metatron, a small press I co-edit.

I first met Sophia in March of last year, at an event I performed at in Toronto. Though she is ten years my junior, we got along almost instantly, without having to try very hard or at all. Sophia is a good conversation partner. She’s lucid, smart and driven, but also kind, non-judgmental and easy-going. During the year or so that we’ve been friends, I’ve seen her read poems live on cam in a McDonald’s, gain confidence and momentum as a writer and artist, being hospitalized after an an incident, start a band, publish an essay that went extremely viral, being discussed on Gawker, Salon, and about a million other outlets, and now getting ready to publish her first collection. Her debut is kind of a hybrid, not quite a collection of poems, not quite a diary, not quite a novella, but something in between. In tone, her book feels, to me, like Marie Calloway meets Megan Boyle, with a dash of Tao Lin added as a kind of Sriracha-like flavor to the mix.

After hanging out with Sophia in Windsor and Detroit, I interviewed her over email for The Fanzine. Here’s our conversation. 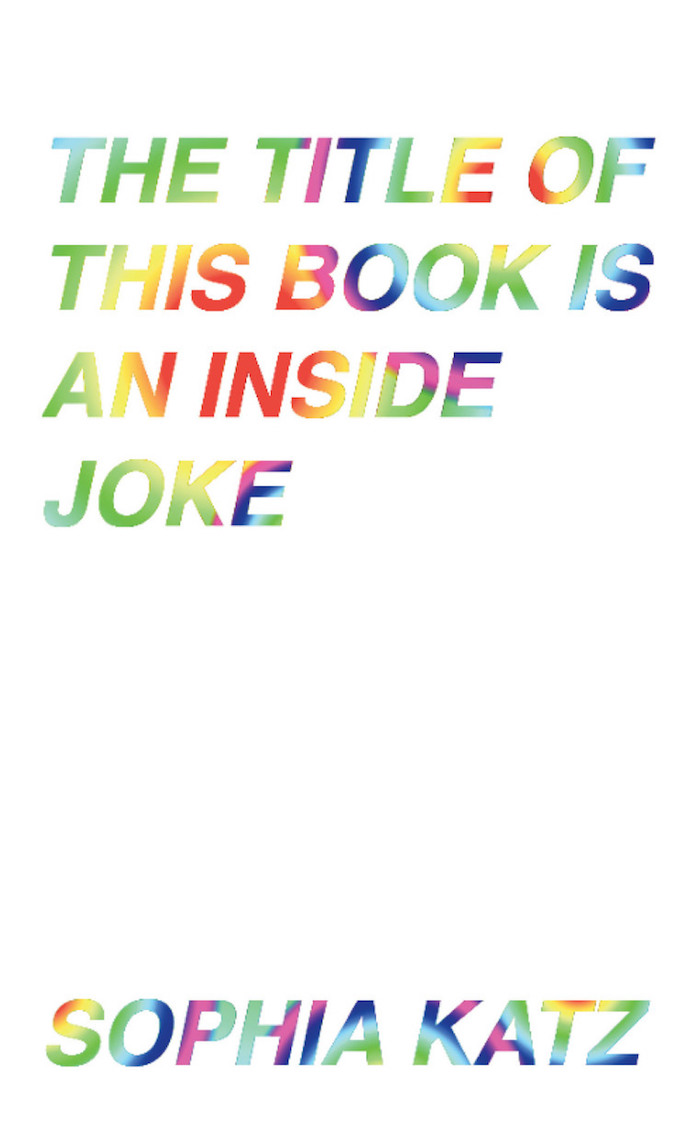 FANZINE: Your book almost feels like a time capsule to me, like it seems to capture a very specific period in your life. When you were working on it, was writing a way for you to, like, record and analyze your own behavior and experiences? Did you notice over time any interesting patterns you weren’t aware of, like, “Oh, I should really stop doing that”?

SOPHIA KATZ: It served that purpose in many respects, I think. While working on the book, I was simultaneously dipping in an out of what felt like a perpetual depression-loop. Writing constantly helped to momentarily pull me out of that, and be critical of my behavior in a way that felt more productive than just silently repeating “you are failing” to myself constantly. But I also basically just wrote steadily, whether in blog posts or word documents, and rarely went back to edit or even reflect until months later.

I don’t know how it is for you, but I constantly feel guilty for not “being productive.” Is that something you struggle with as well? What do we even mean by that, “being productive”? Sometimes it feels like the key to be successful at art or writing or whatever is just to be the person who is the most willing to destroy him or herself for literature.

This feeling comes up often for me and most ‘creative people’ I know. It seems as though most writers, or people generally, experience this. I don’t know if it’s really possibly to be a part-time writer or artist. Art seems to mostly be based on intense emotions and situations, so it makes sense that the most successful writers are the ones that ‘destroy themselves’ or create a lifestyle based on what they want to express artistically. In the monologue of her video for Ride, Lana Del Rey says something like, “We had nothing to lose, nothing to gain, nothing we desired anymore–except to make our lives into a work of art.” I relate heavily to this quote (and to basically everything she does). Since middle school I have been constantly trying to find a balance between doing that, and maintaining some sort of non-pretentious, ‘healthy’ routine; I don’t think I have figured it out yet.

Can we talk about the massive internet shitstorm you found yourself at the center of last fall? I am just curious about what that period was like for you. It must have been surreal, your writing being discussed on Gawker and Salon, random strangers giving you life advice on social media (“Safety Tips for Sophia Katz”), etc. How did you feel during that period?

I felt weirdly zen and unaffected throughout the whole thing. Like I was able to identify the severity of the situation, respond to emails, talk to people about it, but it never felt overbearing emotionally. I genuinely did not think a lot of people would read the essay. I assumed that my friends in New York who knew Stephen or knew about the situation would read it, but I never thought it would reach the level of virality that it did. It seemed like a good crash course in what it feels like to have a piece of writing become popular, especially one that sparks emotional or political turmoil for people. My dad came to visit me in Toronto about a week after the essay was posted, and I remember him saying “don’t let this be the piece of writing that defines you” which was definitely something that I hadn’t considered up until that point, and was something I needed to hear.

Overall, do you feel like this piece changed people’s perception of you as an artist and writer, not just on the internet but also in real life? Also, in Toronto, where you live, what kind of art community do you have around you? If you feel like it, you can use this use to question to give shoutouts to talented local artists that you like and inspire you.

“We Don’t Have To Do Anything” allowed me to, I feel, approach a complicated and confusing experience from an angle that felt real and honest. It represented something that, as a human being, I never thought I would experience, so I was almost figuring out how to deal with it while I was writing it. I think the piece caused people to listen. Not just to me, but to each other, which seems healthy. It was never meant to spark a political debate in the literary community or otherwise, but I’m glad the piece gave people a voice when they felt without one.

Toronto’s creative community is multi-faceted and sort of incestuous, but in an endearing way. Because I attend OCAD, I am around the classical definition of ‘artists’ constantly, so I feel like I have a sort of jaded view towards the art community. With that being said, there are a lot of cool things going on. There’s a performance artist named Lauren Scott (also known as Loren Scutt)  who I got to know through a class we’re taking together, and she makes really beautiful, moving works. Things that make you feel many things at once, intensely. Also my friend and frequent collaborator Jason Steltman, who is a brilliant photographer and person generally. He inspires me on a daily basis.

In the intro, I mentioned that your book feels to me like Megan Boyle meets Marie Calloway, with some Tao Lin added for flavoring. Is there something I am missing as far as your literary influences go, like maybe something less contemporary?

That description seems hilarious and insane. I feel like it might be a bit reductive not so much to my work but to theirs. That isn’t to say it’s not flattering, but I have deep respect and admiration for all of those people and their writing, and I don’t know if I can look at this book as anything other than an isolated experience. Does that make sense? I’m laughing while writing this.

Do you have a favorite piece or moment in your book, something that still has a lot emotional resonance for you?

It changes often, but currently I think my favorite piece is “New Years 2014.” It covers the span of one evening where I run around my hometown trying to have fun on a night that is never actually fun. It expresses a set of feelings that are extremely specific to that period, but I almost relate to it more when I read it now. It also feels comforting to read what I feel are fairly concise but authentic portraits of people close to me. I made a lot of accurate predictions about how things would go for me in 2014 which sort of terrifies me, but it seems good.

What’s a good email that you’ve received in the last two months?

Last week my therapist sent me an email at 2:42 am that ended with: “Just accept your successes, accept the praise you receive, and stop spending so much money at Whole Foods, it’s not necessary.”

So the other big thing I’d like to ask you about, if you’re okay talking about this publicly, is the period during which you were hospitalized. Can you describe some of the circumstances that caused this incident to occur, and maybe a few things you’ve learned from going through something like this? How do you feel now about this experience, looking back?

During the summer, I used a lot of psychedelics, LSD specifically, in a short period of time. I was ‘going hard’. A part of me wanted to see how far I could push myself, I think, and another part was searching for something I still don’t fully understand. Essentially I went insane. The insanity culminated with me on the roof of a very expensive hotel, mute, wearing all white, seated in the lotus position, refusing to come down. I don’t think I can adequately verbalize what I was thinking or feeling at this point, but I’m trying to write about it in small fragments every day. I was hospitalized for exactly a month, while in what felt like a maze inside my own mind. I didn’t sleep or eat, and my existence essentially became based on finding my way out of the ‘maze’ of insanity. A lot of synchronicity. A lot of messages. I don’t think I will ever understand it completely; neither will my doctors or loved ones.

That sounds both terrifying and fascinating to me. Is there a word for that? “Fascifying”? I don’t know. So if the last 12 months have been kind of a whirlwind for you, how’s life for you right now? We can end with this, I think.

Right now, it feels like my life is steadily improving on a daily basis. I took a break from writing after my hospitalization, and am just starting to re-establish personal routines with writing and life generally. It feels good to have The Title Of This Book Is An Inside Joke published. The original manuscript travelled with me everywhere I went this past summer, including multiple cities, drug induced hazes, hotels, and hospitals. I actually thought it was lost up until a few weeks ago when an ex I hadn’t seen in a while handed it to me. It’s filthy and missing the last page I think, but I’m happy to have it back.

I love that story about the manuscript of your book capturing not just a specific period of your life, but also following you physically during this period and accumulating a similar amount of “damage,” like a sword you brought into battle with you. Seems very poetic.

It definitely felt poetic at the time. But everything feels poetic when you’re basically insane.