I think I first heard about the existence of the exhibit in Vogue. They were touting it up (rightfully) during its first incarnation in London, before anyone had any idea it would come to the United States. Of course I couldn’t go. I wept inside, and almost immediately, ordered the accompanying book online.

God knows what goes on in that genius’s head, but Bowie picked Chicago’s Museum of Contemporary Art as the only U.S. destination for his latest work, anointing my own town as the thriving heart of the art world. I bought tickets a matter of minutes after they went on sale, expecting the first weekend’s time-slotted tickets to sell out at the rate of a Lollapalooza three-day pass.

They didn’t move quite that fast – after all, the exhibit would be here until January, not a one-weekend only affair – but ordering online is a blessing that prevented my boyfriend and me from standing in line for twenty minutes to buy tickets for two hours in the future, as I witnessed many guests doing. It also, thank the lord, prevented some bro in a too-big Tap Out shirt making weird poses in front of Bowie’s face on a poster outside the museum from bothering to wait around to gain entry. Good. I treated this exhibit as my church and strictly wanted believers only.

My boyfriend and I waited in the orange-rope-separated line for a good 20 minutes before our time slot. Like the rope, the exhibit is orange. I know you say, “How can an entire exhibit be a color?” This exhibit is orange, from its promotional material, its outdoor decorations, its accompanying souvenirs and books (like the one I have), straight down to the dividing ropes. David Bowie Is… Orange. 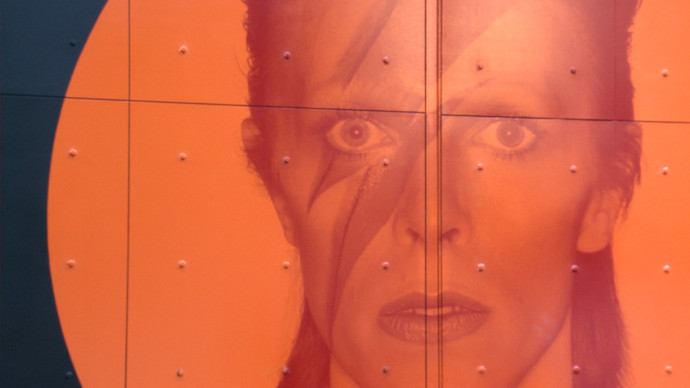 Once inside, we are given headsets that will know where we are at all times, play the appropriate music for whichever music video we are watching, provide us with snippets of interviews from Bowie himself, even garnish our ears with the sounds of scenes from Labyrinth. Unlike many museum headsets, we need not go in order. Unlike many museum headsets, mine plays “Starman” until I have my fill.

The first room we enter exposes a young Bowie, a tense British lad trying out various bands, leaving as soon as he realizes they aren’t taking it seriously enough. It shows posters from the time, a Britain recovering still from the Second World War, singers and early rock and roll artists who inspired the boy Bowie. We hear Bowie recount his own struggles – mainly, in my mind, his constant fear that he was balancing on the brink of sanity.

It seems every artist or creative person has at one point in their lives had to doubt their own sanity. The world is telling you to build, to buy, to sell, to keep stocks and bonds and more than anything, to do something of use. It isn’t our fault that, what the world can’t seem to see is, for us, music and art and literature are among the only things of use.

What’s worse are those artists wrestling with their own sanity in a very chemical and real way. For Bowie, too many of his family members ended up in mental hospitals. Too many were deemed insane at certain points. Growing up knowing that’s the mind you are likely to inherit, I can’t even imagine the pressure and the self-doubt and the extreme self-awareness it must bring someone to question whether this strangely excitingly new thing they are creating is a product of simple genetic madness.

In the second room Bowie has landed in space. Here we meet Major Tom, gaze on his outfit as it hangs across from a short film. In the picture, Bowie, dressed as a mime and circa roughly I think 1973, narrates the story of a boy who puts on a mask, making everyone laugh. He puts it on at school, at home, at the pub – everyone loves him in it. Soon, he becomes famous. People love the mask. But one day on stage, the boy tries to take off his mask, finding that it has become stuck to his face. He struggles, ripping at himself, gripping at his throat. It won’t budge. The boy ends up strangling himself trying to get the mask off; the papers make a big deal of his death. But, as Bowie coldly reports, “The funny thing is, none of them mentioned a mask.”

Starman is waiting around the corner. I’d like to take his picture, but a sign at the front told me not to because of copyright laws. Some man in his late 40s takes a good number of photos anyway and I can’t help but wonder how important he thinks he is and why he thinks he’s above the rules and whether he just believes he’s the truest Bowie fan in the entire exhibit so it’s his right, anyway.

I start to wonder what he thinks of me, standing there in a black spandex tee, black jorts and dark glittered tights. Does he, like so many men I’m sick of listening to, believe I will never fully appreciate Bowie or any other artist born before my time since I was not there the first time around? Does he think I’m a fake, that I don’t even care about Bowie’s music and I never listened to it alone in my dark bedroom during high school, crying and trying to understand why I couldn’t just fucking fit in with the other kids and stop being so bizarre (just as, in all likelihood, he couldn’t)? Does every adult in this room (which is about 60% well over 40) believe I have no connection? I try not to think about it.

There’s a room of Diamond Dogs. There’s a case of suits standing next to a music video of David Bowie singing about how great it is to be a boy with a chorus of drag queens (how did I forget about this song? How did I forget about feminist Bowie?). There’s set designs based off of science fiction novels, suits tailored so tightly and abstractly the man had to be carried to the microphone. There is the glass ball Jareth the Goblin King played with in Labyrinth. There’s a room based around his move to Berlin, where he broke himself of the cocaine addiction and began to paint. There’s so much.

We’ve been there inside the exhibit about an hour and I’m starting to feel anxious. The headset is bothering me. I take it off and become acutely aware of the fact I am surrounded by people (literally, surrounded. I have never been in a museum exhibit this packed, its attendance beating many concerts) yet I can hear no one talking. Everyone is silently tuned into their headsets. We’re all listening to “Ashes to Ashes” together in silence. I begin to feel very, very alone. I start taking breaks from listening to the recorded songs and messages. I start interrupting my boyfriend’s experience to talk to him about the music videos we are watching, about an article I read about Andy Warhol that related to something in the exhibit, about anything. I don’t like this feeling of alone. It reminds me, oddly, with the black painted walls and ceilings, of being out in space, using devices to communicate.

We make it to the end, the last room containing maybe a dozen or more of Bowie’s stage costumes from various years. I’d forgotten how tiny the man was. Is. Some of those shirts and spandex suits I’d barely fit into myself.

I left feeling… I don’t know. Inspired, and at the same time helpless to do anything with it. I wanted to be this creative mess of a monster and let everything I was all show all at once, yet I realized, walking through the crowds, so did every other person in that room and yet, we can’t all have that, we can’t all be artists, at least not at all times, and certainly it seems like none of us will ever, at this point in our lives, make it to the extent of Bowie.

It’s weird, this contact with your idols. I’m at the point where there are certain musicians I don’t want to meet because I’ve met some people I’ve very much admired and they let me down by not being that person I see onstage, by not being the mask I didn’t even expect they were wearing in the first place. I think a lot of the reason I left feeling alone, almost let down was because I went expecting Bowie, his secrets revealed. I expected to grasp something, to touch on some cornerstone of what made this ordinary British guy Bowie, what he really actually did or had or wore to separate himself from the lot of us. How did he do what he did? What were the steps? What did he give for his talent, and how could I make the same deal with the devil or God or whoever helped him on his way? Instead, I saw his old clothes.

David Bowie Is… not present at the MCA. The masks he has donned throughout the years are. It’s great, really, to see the Starman’s wear as if he’s right in front of you. For some people, this is enough, to be in the presence of an object that was in the presence of his greatness. Which is fine, but let’s call the exhibit what it is: David Bowie Was. Where he is now is past these old shells he’s left for the devoted to swarm, hoping for some clue impossibly not there.