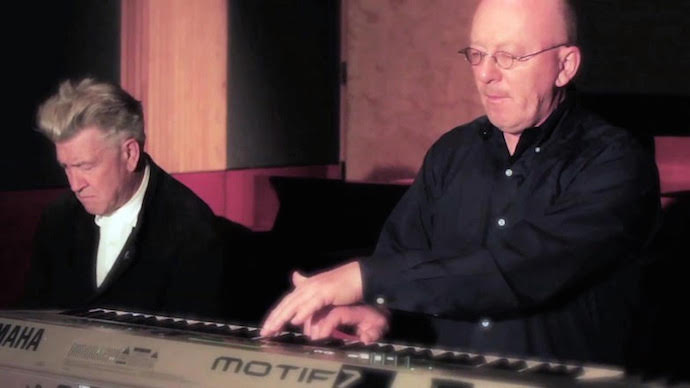 “A beautiful woman walks through the streets of Lodz at night, carrying a heavy burden — her unfulfilled desires and dreams.”

“Great electrical plants stand like cathedrals while trolleys far below crisscross Lodz throughout the night, their sparks holding the promise of love;”

Marek Zebrowski and David Lynch first met during the Camerimage Film Festival in Lodz, Poland and started to work together during the evolution of Lynch’s Inland Empire. Originally Zebrowski served as a translator for the shooting of several Lodz-based Polish scenes in Empire, but upon discovering their shared interest in musical experimentation and improvisation, Lynch invited Zebrowski to his Los Angeles studio to participate in a series of musical experiments. Over the course of six years, the two recorded their improvisations.

I spoke with the pair to discuss their relationship and the beautiful vinyl release of Polish Night Music, courtesy of Sacred Bones/Sunday Best.

What drew you to Poland?

David Lynch: The Camerimage Film Festival gang and the possibility of photographing derelict/abandoned factories and Polish nude women. The city of Lodz was the textile capital of Poland for a while and filled with factories…most are abandoned now. The city has got a great mood…only in the winter though, for me.

Marek Zebrowski: David came to the film festival several times and I would give him little sight seeing trips where he would photograph things. He’s lived in California since the early 70’s he actually likes the cloudy and dark weather in Poland.

What were your original discussions that lead to you working on Inland Empire?

MZ: I met David many, many years ago–2000, I think–and we just chatted away and he found out I was living in LA and eventually we just got together. Obviously I knew who he was, he found out I was a musician and invited me to his studio two or three years later. He set up a recording at his studio with two keyboards and said, “Would you like to do some music?” and I said, “What are we doing?” and he said, “Well, I’ll sit and play something you play and improvise something and see how it goes,” and I asked him, “What is the style we’re improvising? Are we using any patterns? Are we adhering to any musical style or genre?” He said, “No, just make it sound contemporary and interesting.” I said, “I need a little more than that” and he looked and paused for a minute and said, “Here’s what’s going on: it’s dark it’s a cobbled stoned street there is one car driving on and another car following it,” and he started playing and I started playing eventually and we just played for a while. Over the next couple of years whenever David had time recording sessions were scheduled.

All the titles of the tracks suggest scenes  (“Night: City Back Street”,  “Night: Interiors”) Do you see this as a soundtrack to an imaginary or unmade movie?

DL: Not an unmade movie, but I see them as definitely scenes that play in the mind.

MZ: The criteria was always mood. Each time whether we played a session in the studio or during a concert David followed his idea from the initial session where he would prepare a line of text, a little poem or a paragraph –just mise-en-scène. A kind of idea would be announced and we would improvise based on that thought so the pieces that were recorded had these certain titles and we liked the way they worked together. The tracks on the album dwell on the same subject matter: abandoned factories, night scenes, lonely women walking down the deserted streets and the post industrial landscape. It was dedicated to a certain mood and those improvisations that followed such mood were the ones we wanted to share with the public. 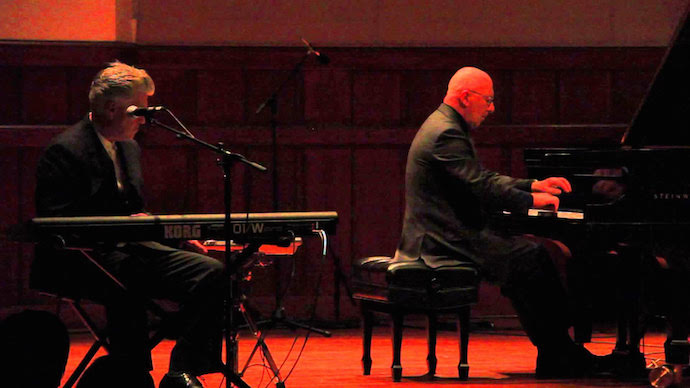 How is it walking into a collaboration with someone who is such an auteur, someone with such a distinctive style, tone and mood.

MZ: I love him as a filmmaker, but even more David is one of the most generous, supportive, and warm individuals. Looking at his films you can think he’s a very dark personality but in fact it’s completely opposite; he’s a very friendly fellow who encourages improvising and letting your imagination run free. I think that’s why he draws out from performers, not only musicians but from actors and others on his projects such amazing results–he somehow has a way to coax out things from people they didn’t expect they had.

I was listening to his soundtrack work with Angelo Badalamenti and Floating into the Night the Julie Cruise album they produced. It’s amazing that the artistic stamp of David Lynch that is so instantly recognizable. It’s an amazing skill to have such a distinct style but to be completely open to collaboration.

MZ: Yeah, that’s just it! He has his own world and his thoughts and his dreams inhabit that kind of universe and somehow he’s able to work with people in such a way that others get the magic key to his kingdom. It’s the sign of a great artist

You instruct the listener to play the album after dark, so I wanted to end by asking you both does Poland at night conjure a particular image for you?

DL: The image is of Lodz at night and the mystery it holds.

MZ: It conjured something for me when I was playing the improvisations. You capture the moment and that’s where you dwell on that particular moment and the beauty of it is that the same moment cannot be recaptured. It’s only been captured by the recordings that we’ve made. That instant when we thought about these things. If we think about the same things once again, I’m sure the music would be different.