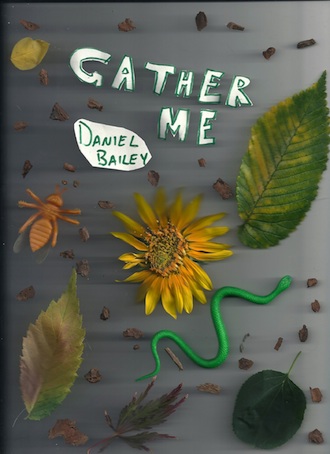 The first poem that I read from Gather Me by Daniel Bailey was called “I AM NOTHING / LET ME BECOME: AN OPENING PRAYER.” I decided to read this poem first because it was the first poem in the book. I figured it would be representative of the other poems in the book.

My husband or wife used to complain that he or she hadn’t managed to read a single book since she or he graduated college. I used to throw books at her and him when he or she said this. Then my wife or husband would say, “All you ever do is throw books at me,” or, “Our marriage isn’t working,” or, “Love died before our generation even existed and we never had the same opportunities that our parents did.” When I threw Gather Me by Daniel Bailey at my husband or wife, he or she actually opened it and read the whole thing. Now, whenever we try to believe in love, my wife or husband likes to repeat a line from that book like, “let the animal in me be the animal.” And it almost feels like somehow the two of us might someday learn how to create love in a loveless world because of Daniel Bailey.

These days, it seems like the worse thing about male poetry is all the male poets. Take for example, the male poet I slept with last night. He kept moaning even after I removed my genitals and threw him on the other side of the river. This male poet—and male poets in general—did not understand that I didn’t feel anything for him because male poets destroyed everyone’s ability to feel anything. So why should male poetry pretend that it’s something it isn’t? Don’t get me wrong, I care about male poetry, but there’s a limit. To be clear, everything wrong with the world is the result of male poets. Luckily, Daniel Bailey is the first male poet that cares more about not caring about male poetry than furthering the myth of male poetry because he understands that a boring poem having a boring conversation with another boring poem is still pretty boring even if both poems are wearing genitals on their genitals.

Not to beat the subject of male poetry to death, but if you read every poem in every anthology of male poetry, you wouldn’t read a single good poem in which love and money are described in a way that matters. That’s because male poetry believes their flowers aren’t made from the same crap as every other type of poetry. I don’t consider Daniel Bailey’s poems to be in the same class as the rest of male poetry because he isn’t afraid to ask if we are boyfriend and boyfriend or girlfriend and girlfriend.

It really is about time that we had a poet like Bailey make his poems climb upon a large hill and say, “If poetry is still holding on to anger, resentment, or condemnation, it is clearly holding on to a distant past when it had not quite learned how to be a poem. This may give the poem a comforting sense of identity and solidarity with other poems, but it is keeping it in bondage to the past and blocks full access to its essence and true power. If poems exclude themselves from non-poems then this fosters a sense of separation and therefore is distant from its true nature.”

A few weeks after I read Gather Me, I ran into a friend who said he was thinking about divorcing his wife or husband after suffering through eight years of marriage counseling. I shrugged and repeated a line by Daniel Bailey (“Christmas Eve is for getting drunk in yr church clothes”). My friend smiled, said the line gave him hope that his marriage could be saved, and that he would finally be able to connect with his wife or husband on the emotional level he or she had always been seeking. But when my friend got home his wife or husband was either dead, gone, or had never existed.

Anyway, on moonless nights, when I’m alone and thinking about everything dead in the world because it helps me pee, I now also think of Daniel Bailey and the time he defeated god in a game of penis.

Gather Me by Daniel Bailey is available from Scrambler Books.