Curly Hair and the Tension Between Characters: An Interview with Rachel B. Glaser

Rachel Glaser’s debut novel, Paulina & Fran, just came out from Harper Perennial, and is getting well-deserved hype from everyone, including James Franco. Don’t miss out! And now, here’s Rachel in conversation with the great Michael Kimball, about the novel, hair, basketball, and a little in between. – ed. 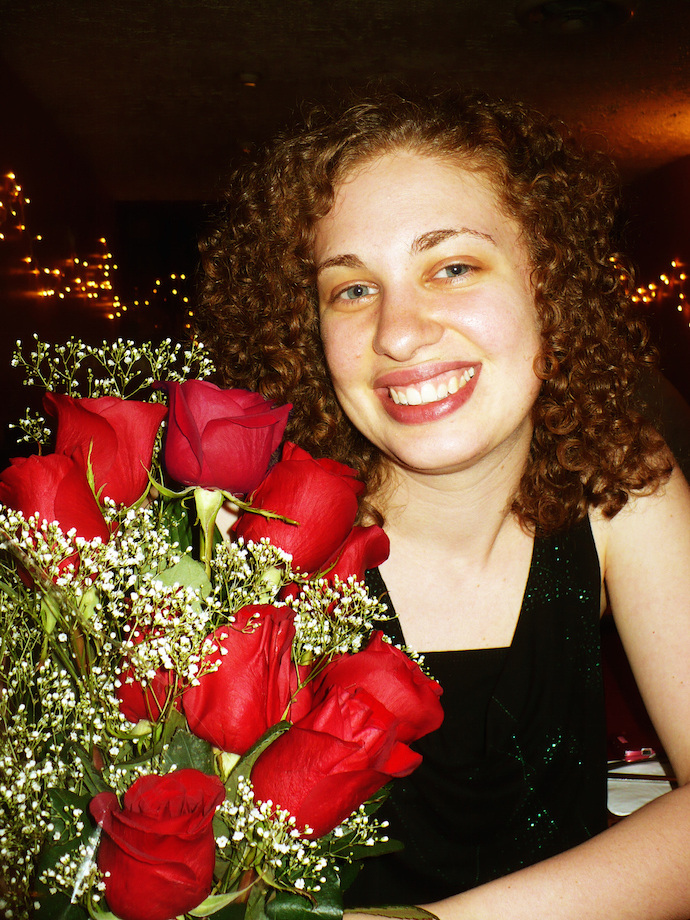 Michael Kimball: Toward the end of our interview about your first book, Pee on Water, I asked you if the things you did in that collection of stories, could “work on the level of a novel.” So I’m wondering what techniques, devices, or approaches carried over from those stories to the your novel, Paulina & Fran.

Rachel B. Glaser: Good question. I think the structure and style of my sentences from Pee On Water (POW) are similar to the ones in Paulina & Fran (P&F). Another POW element that I see in P&F is the mind trips within a character during moments of confusion or strong emotion. But in P&F, instead of using new forms or strange narrative jumps to create tension, I focused on raising the tension between characters.

Kimball: Yes, I’ve been thinking a lot about the fascinating tension between the two main characters. I love how you transferred that tension, in your work, from a formal element to character-based element and how that tension drives the narrative, which mostly focuses on that friendship between Paulina and Fran. In fact, the whole book is a narrative-driven meditation on friendship. How did you decide your first novel would be about that subject matter?

Glaser: I wrote a little three-page story (while playing around with the discontinued Microsoft Word function AutoSummary) about two young women obsessed with the same young man. I liked a lot of the sentences in it (some have remained intact), and decided to make it into a seven-page story. The seven-page story spanned many years, and I began to see that if I made the story novel-length, the time gaps between events would be more felt. Common novel concepts–that the story would gain tension as the pages accumulated, that the readers would have to keep reading to see how things ended up–seemed like worthwhile effects to write for. It wasn’t until a year into writing it that the ambiguous relationship between Paulina & Fran became more central, and Julian became more of a side lurker.

Kimball: Wait, Autosummary? What did that function do to the sentences or story or the summary of the story? And was it something about playing with that function that made that story initially work for you or was there something else in the story that grabbed you?

Glaser: Autosummary attempted to summarize your Word file by taking note of which words or phrases were repeated, and maybe focusing on the first and last lines of paragraphs. I never figured it out. The result was always very random. I used to play with Autosummary when I didn’t have a clear idea of what I wanted to write, or when I didn’t like what I had already written. In some way, it was like using a Photoshop filter on writing. Many of the stories I wrote before Paulina & Fran started with concepts or unusual occurrences (like a talking flower or what have you), but P&F was very straightforward and initially I must have thought it was too boring or common. Pressing Autosummary made the page I’d written instantly weirder, and it kicked me off in the right direction of having fun with these characters, wallowing in the drama, and seeing what new things I could do to a sentence.

Kimball: I’m jealous. I didn’t know about Autosummary and now the function doesn’t seem to exist anymore. So let’s go back to your mention of Julian as a side lurker. He was more central early on? He still matters, but mostly as a narrative trigger. That is, he becomes the main reason, I think, for the falling out between Paulina and Fran.

Glaser: I think Julian also acts as an emotional and sexual stand-in, as well as a messenger. Paulina and Fran reach a point where they feel more comfortable pursuing him and talking to him than they do with each other. He becomes a symbol for many things, and sometimes it’s interesting (and tempting) to sleep with a symbol! 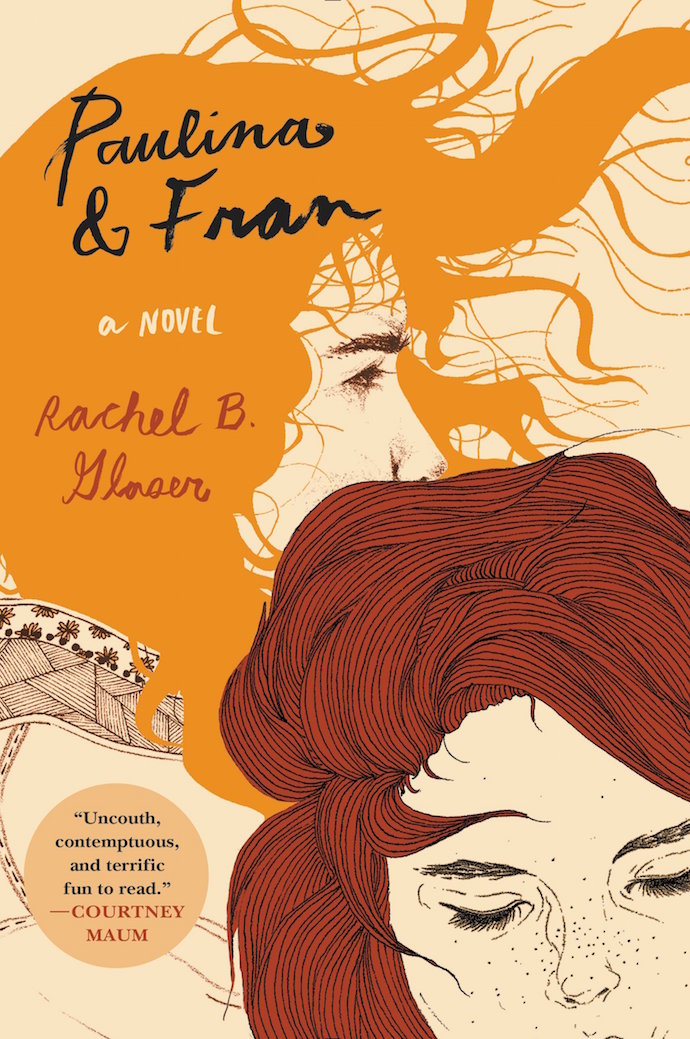 Kimball: I like that Julian is part of the tension between Paulina and Fran—and that he doesn’t really get his own story, except for a few places where his point of view slips into the narrative. I’m curious about the decision to give him the reader his point of view, even a little bit of it, and what its function is.

Glaser: I wanted readers to see that his affection is spotted with annoyance, that his dismissals don’t end his longing. He too is trying to gauge what relationships are crucial to his life and what he should sacrifice for them. His perspective fills the story out, plus gives a new angle to glance at Paulina and Fran.

Kimball: Of course, the real story is Paulina and Fran, their friendship and their hair. I mean, I have curly hair and you have curly hair, so I understand how different that makes people, but I’m curious about how you decided to make curly hair such an important element of the novel. I don’t think hair has been so important since Samson.

Glaser: I’m glad you are using this interview to come out as a curly-haired man! Paulina and Fran initially bond with each other over their curly hair, but later when they are estranged from each other the similarity becomes a threat. Maybe it feels to one like the other is copying her. They each want their hair to look the best. Early on in writing the book, I saw that the hair sentences were doing emotional work—the state of the characters’ hair defined how the characters felt. The more hair sentences I wrote, the less they seemed like a typical description and the more they seemed like an extension of the character. I realized I had many things I’d never said about hair, and I still have more—the way loose strands cling to you in the shower, the nest-like balls pulled from a comb, etc.

My friend, the poet Arda Collins, showed me this Baudelaire piece called “A Hemisphere in Your Hair.” I think this is my favorite line: “When I take your elastic rebellious hair between my teeth I feel as though I am devouring memories.” It was written in 1857!

Kimball: Yeah, love that. Somebody needs to edit a hair anthology—Samson, the Baudelaire, then closing with an excerpt from Paulina & Fran. Who has the best curly hair in fiction (besides Paulina)?

Glaser: You and I should edit the hair anthology… (!) That’s an interesting question. I just asked my mother and my sister-in-law, both of whom have curly hair and are well read, but all of us struggled to answer. They brought up some people in the Old Testament, a bit character in Ramona, and the cast of Fraggle Rock. Cupid has curly hair… I’d pick Red from Fraggle Rock if I had to pick one. Those aren’t true curls, but they have a wild shape. Mulling this over made me realize that curly hair is often used for villains and comedic characters, and that I don’t have many lasting impressions of the physical appearances of the characters I read.

Kimball: Yeah, it’s a little disappointing that curly-haired characters don’t get an even-handed treatment in fiction, but Paulina & Fran is a step in the right direction. OK, last question, because we both love the NBA: Will the Golden State Warriors repeat in 2016?

Glaser: Hmmmn, I know they will get far, but at this moment I’m seeing a Cavs/Spurs 2016 Finals.

Rachel B. Glaser is the author of Paulina & Fran, Moods, and Pee On Water. She lives in Northampton, MA, and tweets as Candle_face.

Michael Kimball is the author of eight books, including Big Ray, Dear Everybody, Us, and, most recently, The One-Hour MFA (in fiction). His work has been translated into a dozen languages, and featured on NPR’s All Things Considered and in Vice, as well as in The Guardian and Bomb.