[ We received an amazing slew of submissions taking the chance to Create Their Own Atrocity. Thanks to everyone for the killer work, which made it a rough time of picking a winner for John, so he picked three. We will be running them, as well as a few other runner ups, in the next few weeks, continuing with today’s second winning entry by Jessica Hilt, alongside an original illustration by John. In the meantime, consider picking up a copy of John’s novel, The Baltimore Atrocities, if you haven’t yet! – ed.] 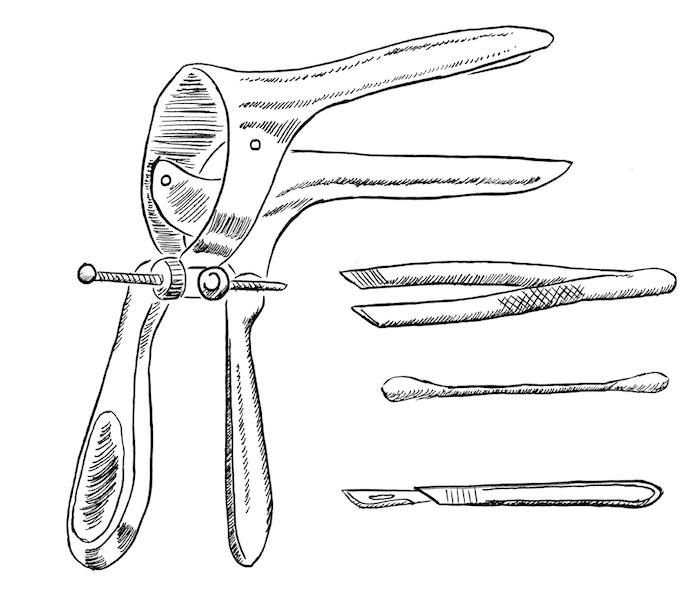 My high school love interests included a boy from a neighboring town, a girl from band camp, and the Jehovah’s Witness who made out with me in the dark room and then discovered that God wanted him to dump me. I was a virgin when I graduated. But now, now that was all going to change. I was going away to college at the end of the summer and I had met a nerdy boy. We used every waking moment to be together. He knew I was a virgin and we’d make out for hours. Naked, flesh pressing, wet. But my virginity acted as some magical voodoo over him. He wouldn’t go near my cunt. No fingers, no tongues, nothing. It was like my hymen was force field.

My first weekend at college, I made an appointment at Planned Parenthood. I wanted to be prepared. Somehow, being on birth control would be the light to the moth, drawing sex to me. My cheeks flaming, my ears on fire, the counselor told me how impressed she was that I was a virgin seeking birth control and that the pap smear was a simple formality before giving me a prescription. I moved on to the doctor. My legs up in the stirrups, cold jelly, and a female gynecologist talking me through every step. A pause. She asked the nurse to get the pediatric speculum. She retrieved a tiny toy version of the grown-up device. A silent struggle. Then asked the nurse for a q-tip. A smile. A pat on the knee. Just having some difficulty. Hang tight.

A force field. A magic voodoo over my cunt that was impenetrable by anyone, including the doctor. I would need a surgeon to remove my hymen.

I called my mother, the nurse, and cried. She laughed. Called me a Super Virgin. She arranged the surgery and a month later, I had been penetrated, while unconscious, by a man with a knife (or a scalpel). It was two weeks of recovering before I was properly fucked.

[ Jessica Hilt is a graduate of the Clarion Writers’ Workshop and University of California San Diego. Her work has appeared in Bourbon Penn magazine, State of Terror anthology, on stage at The Old Globe, and in various bars around town — with or without provocation. ]