Create Your Own Atrocity: Andrea Null’s “Salt and Light”

[ We received an amazing slew of submissions taking the chance to Create Their Own Atrocity. Thanks to everyone for the killer work, which made it a rough time of picking a winner for John, so he picked three. We will be running them, as well as a few other runner ups, in the next few weeks, beginning with today’s entry by Andrea Null, alongside an original illustration by John. In the meantime, consider picking up a copy of John’s novel, The Baltimore Atrocities, if you haven’t yet! – ed.] 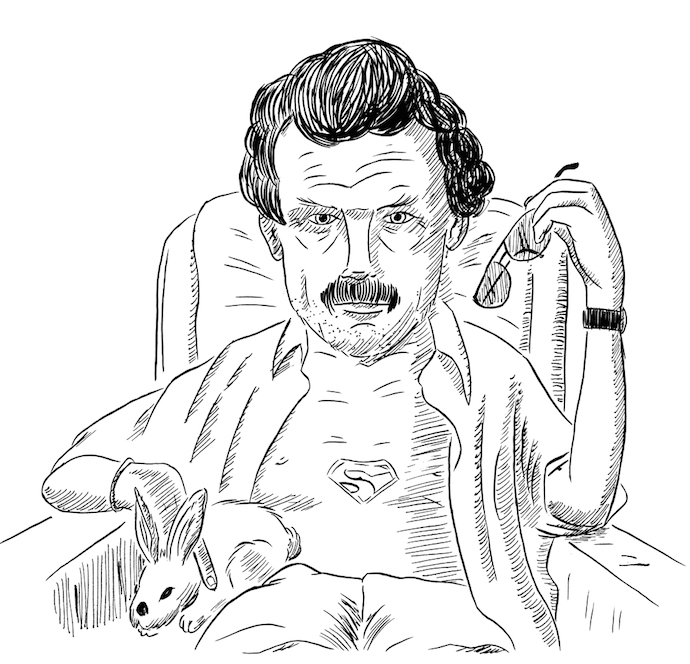 Though I was soft at heart at fifteen years old, I didn’t want to walk into Pope’s trailer. I’d scratched Max on the porch and all his fleas leapt onto my bare ankles, and then the guinea hens came over and began pecking them off me till I was bleeding and raw. Max bared his teeth at them. Somebody had hung an upside-down crucifix on his doghouse, and Barbie was bent over naked like she was blowing Jesus. I was afraid that if I walked in that trailer, I’d get MRSA or AIDS. But I rolled down my pant legs, kicked at the hens, and followed my boyfriend inside, because he needed a favor from Pope.

It was the weekend of Pope’s birthday. He was 57. My boyfriend was on the football team and his coach had just laid into him for getting all these crawling trilobites tattooed all over his chest. That put him in a mood. Plus he had this chore to do. I had never met Pope, but when we rattled the screen door, he answered in baggy underwear the color of his teeth and smiled with all of them down at me, though it was Peter that he held. Pope was something like the team mascot. When I told this story once before, somebody told me, “That’s the thing about football teams in West Virginia. There’s always some retard or midget waterman hanging around.”

Peter held the door for me, and when the light splayed into the room, roaches skittered behind picture frames. There were boy band posters cluttering the wall, and in the corner was a suffocating cement Mary with a plastic Wal-mart bag duct-taped over her head. I knew Pope hadn’t done that, some gutterpunk kid like me had. But someone had also toted his laundry and folded it on book shelves in the living room, each one labeled with a day of the week. I counted thirty-five empty bottles of Olde English on the floor, one on the coffee table stuffed with cigarette butts, two beside it filled with spittle. There was also a cage in the corner filled with an angora rabbit.

Pope wore several tattoos himself. He had two scuba divers carved on either side of his pelvis, and there was Abraham Lincoln’s profile on the side of his neck. He tugged on a white sweatshirt with the New Kids on the Block on the front, and he led Peter and I back to his bedroom, where someone had put up a world map. The thing was covered in pushpins, just like some spiders hoard in their webs. I asked him what the pushpins stood for and Pope replied, “My boyfriends,” waving his hand at the computer.

Peter rasped in my ear, “Go do the dishes,” and because I was two years younger than him, I went and did them. I was pulling macaroni and cheerios, Kool-Aid wrappers and dead roaches from the trap when I heard Pope’s cry. It drowned my ears with blood, for I could tell it was not a cry of pain.

The epilogue is this: Pope was beloved, and what dignity the state of West Virginia could not give him, we tried our best. We enrolled him in community college, though he would never graduate. We took him to the gay bar—Vice Versa—in Morgantown on his 57th birthday. We made sure he had condoms, we took Max to the vet. We loved him so much I hesitate to write about him, because he is dead now and he died shortly after this story would be told. I commit this to paper because I’m a schoolteacher now, and I want to wonder for myself that sacred and profane relationship teenagers have with the least of these, what the rest of us call grotesque.

[ Andrea Null is a schoolteacher in Charleston, West Virginia. Her writing has appeared in the Oxford American, Shenandoah, and is forthcoming in Souvenir. She is a graduate of Washington and Lee University. ]