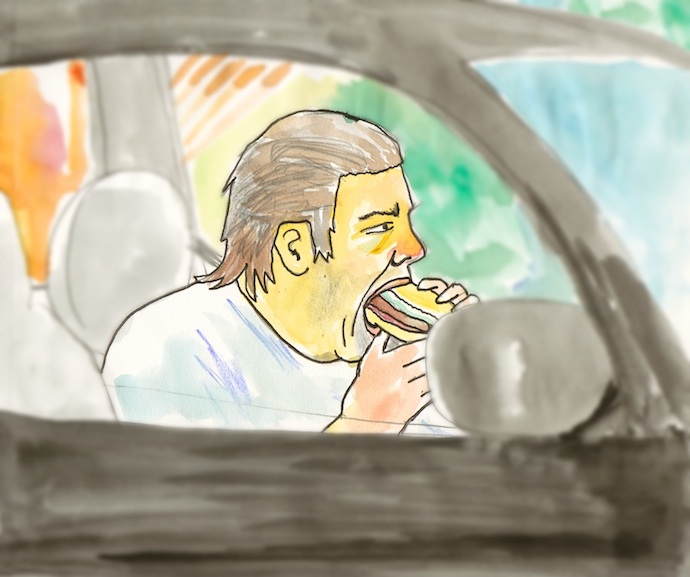 A cow looks at itself and thinks, “Oh well.” It begins walking down a tunnel. The tunnel is narrow. The cow tries to turn around. There doesn’t seem to be anything behind the cow. The tunnel is no longer a tunnel. It has become a box. The cow does not make any noise. It is confused. Something closes around the cow’s neck. If the cow knew what a sweater was maybe it would think it was wearing a metal sweater. The bolt pistol presses against the cow’s forehead. The cow is unconscious. It can’t feel anything. A hole has been drilled into its brain. The metal box unfolds. The cow is on a conveyor belt. A man presses the cow’s eyeball to see if the cow is responsive. This man is the eyeball toucher. He has become mentally unhealthy as a result of all the cow eyeballs he has touched. It is very difficult for him not to touch any eyeball he sees. Last week, while at the dentist office he reached out and touched the dental hygienist’s eyeball when she leaned over him to clean his mouth. The cow quickly moves down the conveyor belt to the next man. He cuts off one of the cow’s feet. The foot cutter likes the foot. He puts it in his lunchbox. It’s a good-looking foot. He collects one good-looking foot every day and hangs it on his wall at home. His son is very proud of the wall of cow feet. Every day the son goes to school and brags about his dad’s wall of cow feet. The son says things like, “My dad’s wall has over five hundred cow feet.” The cow is neither dead nor conscious. It is unsure if it feels anything. The cow is only aware that it may still be aware. The trauma of being a cow in America has both ended and not ended. The next man to touch the cow removes another piece of the cow. More and more pieces of the cow are removed. At some point so many pieces of the cow are removed it becomes dead. Despite being dead, the cow is still wearing its face though it no longer has any of the skin on its face. But before the dead cow can celebrate its skinless face its head is sawed off by the man with the head saw. A man without a head saw picks up the head. He is responsible for loading a bin with cow heads. This man is not very good at his job. The cow’s head ends up on the floor next to the bin. Language of filth and anger is spoken. Instead of picking up the cow’s head the man steps on it as filth and anger continues to be spoken. The hole created by the bolt pistol at the top of the cow’s head leaks. It’s unclear what is leaking. The man stepping on the cow’s head gets louder. Something squirts out of the cow’s head onto the man’s ankle. He doesn’t notice. A uniform covers his ankle. At some point the man stops pressing his foot on the cow’s head. He bends down and lifts the cow’s head into the bin. Later after work this man will do whatever he normally does after work. Which is probably some stereotypical combination of alcoholic beverages, sports, and not talking about his feelings. He’ll also eat. And like just about everyone he knows he will eat meat. Maybe he will boil meat he stole from the factory. He does this rarely. After working all day, it’s difficult for him to do something like prepare food and then feed himself. Instead he usually drives somewhere and then waits until he is handed meat. Sometimes when he gets handed meat he will immediately begin eating it, but other times if he’s feeling obedient he will wait until he’s parked his truck and he’s alone. One of his favorite places to be alone is behind the elementary school. It borders a meat factory cesspool. As he sits in the empty lot behind the elementary school looking out over the cow waste, he unwraps his processed meat and just before he takes the first bite he whispers, “Good boy.”