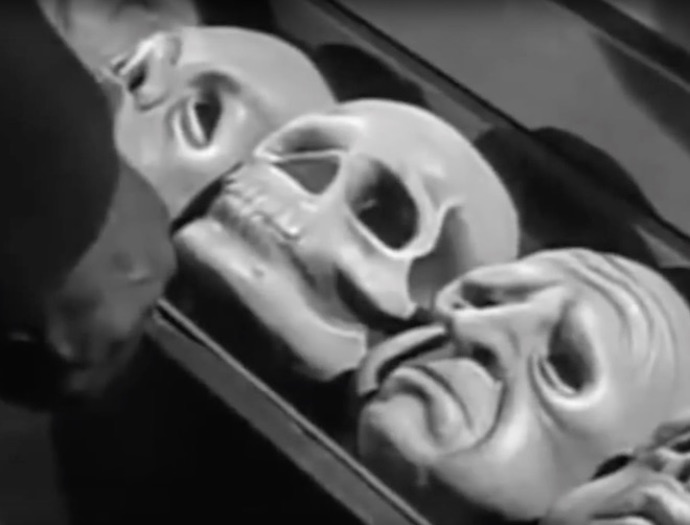 “If you want to make God laugh, tell him about your plans” – Woody Allen

One year I spent all of October filming a 40-minute video for my friend’s post-rock band’s special Halloween live performance. I had this concept to put a giant pumpkin jack-o-lantern on my friend’s head and have him walk about in the woods at night with me following him with a camera. We had a grueling two-night shoot. I had film lights, smoke bombs, a fog machine, and metres on metres of cables running from my brother’s house. The night of the event, we smoked the stage out with so much smoke that by the time the band went to come onstage to perform, the smoke was so strong the beam from the projector couldn’t pierce through the mist. You couldn’t see anything. It was like fucking Spinal Tap.

Another year at university, I decided to do a horror movie marathon, but at the last minute most of my flatmates decided to go to a fancy dress party a friend was hosting across the street. To liven my party up I said, “Let’s play a drinking game” tuned to the slasher film we were watching. This film had an insane body count. After the fifth death in first 30 minutes, all but one of my pals had bowed out. I kept going, shot after shot of cheap bourbon. By the end I had done 14 shots, and as the titles rolled I shouted, “HERE’S A FUCKIN SHOT TO ALL THE DEATH” and chugged another one. Almost instantly I felt terribly sick. I went into the kitchen sat down and just started throwing up all over my kitchen floor. I was told later I was found collapsed in the hallway, discovered when a bunch of friends from the fancy dress party finally appeared.

A couple of years back I had arranged to meet friends to go out drinking and nobody else bothered to dress up. It was just me as Heisenberg from Breaking Bad, complete with the bags of blue crystal meth I spent all night making by dying chunks of orange peels blue and freezing them so they’d crystallize.

Then last year I decided to watch back-to-back Stephen King movie adaptations all night. Around 6pm I had my first trick or treat kids, so I just unloaded both bags of giant sweets on them to be done with it. Word must have got around because I had trick or treat kids knocking until 11 pm that night, even after I put a grumpy note on the door reading NO MORE SWEETS LEFT!

This year I’m gonna turn off all the lights, decline the Facebook party invites, forget the costume and ditch the alcohol. I will order pizza and watch the criminally overlooked Halloween III: Season of The Witch and work my way through Molly Brodak’s incredibly detailed list of her favourite Twilight Zone episodes all weekend, which appear below. I urge you to purchase her new book Bandit: A Daughter’s Memoir, her account of growing up as the daughter of a multiple felon bank robber.

“The keenest sorrow is to recognize ourselves as the sole cause of all our adversities,” said Sophocles, presciently preparing future generations for what in many ways became a natural extension of his dramatic work—a late mid-century TV program called the Twilight Zone. They had three important things in common: they both liked to point out what hubristic piles of garbage human beings are, they liked twist-endings, and they often featured the power of oracles—especially ones that no one believed until it was too late.

Ranked lists of Twilight Zone episodes are everywhere, and usually include the hits like “Nightmare at 20,000 feet,” which seems to be favored only because of Captain Kirk (the story itself is pretty dumb), and “To Serve Man” because it is the King of Hokey Twist-Ending Mountain. Heading into Halloween season, I decided to compile my top picks, which generally look nothing like others’ top picks. The series is available on both Netflix and Hulu and is as prime picking for bingewatching as anything produced today.

This has to be the most heartbreaking TZ episode. The oracle here is a woman haunting her own past self over a poor choice that has come to destroy her life. Viewers get turned around on which self is the real self—the innocent version or the dark, haunting one. What could be more oppressively menacing than one’s own deepest regrets?

The most Hitchcockian of the TZ episodes (maybe it reminds me a little of Psycho), “The Hitch-Hiker” features a woman who keeps passing the same glaring man trying to catch a ride from her as she makes her way across the country. He’s an oracle of course, and like many other characters in this series she doesn’t realize who or what she truly is—another Sophoclean theme.

If you want to hear the man who voiced Winnie-the-Pooh on the animated series fix an evil man’s TV into a conscience-illuminating device, watch this one. There’s just something extra creepy about watching Sterling Holloway, the magic TV repairman, say anything in his instantly recognizable voice, especially threatening things. The main character sees his past, future and present in the TV-oracle, yes, but even more terrifying is this portrait of a lying, cheating, abusive husband who tears his and his partner’s life apart.

For as blindingly white and culturally monolithic as early TZ was, it did try at least to incorporate some progressively-minded political content. The sun will not rise on a town full of people eager to see a man hung. The crowd gets the spectacle they crave, but the sun still will not rise. A hamfisted metaphor, yes, but there’s something moving about it anyway, with a disturbing, rather than conclusive, open ending.

I’ve had nightmares about the whimpering groan on the other end of this poor woman’s telephone when she picks up inexplicable late night calls. It is a very upsetting sound, very subtle, but unforgettable scary. And the particular pathos of an elderly woman’s vulnerability makes what would otherwise be just an annoying phone call a truly persistent terror.

Allen stares into a dark tunnel waiting for the subway, and this image stands as a haunting metaphor for where the future of humanity is headed. Starts out as bit of snoozer but things change quickly, as the best TZ episodes do. In what at first appears to be two unrelated plot threads, Allen has an uncontrollable urge to kill, and his hometown unrecognizable, with no record of his existence there. The explanation for both of these threads comes together with an eerie prescience for our current AI fears.

4. “On Thursday We Leave for Home”

In a horrific future where all, young and old, are forced to wear 90’s style bucket hats, the leader of a straining post-Earth colony finds himself unable to give up control of his people upon being rescued—even though they are all suffering. Like most self-contained 30-min TV shows, TZ is not great on offering complex moral characters—the baddies are bad and the goodies are good. But not here. A well-meaning man turns dictator, then turns again into a rather empathetic and pathetic figure. Even better than a twist ending is the chilling final shot of this episode.

What’s it like when no one believes you about things you are clearly an authority on, like your own life? Just a regular day for a lady, unfortunately. This beautiful episode features a repeated and very David Lynchian oracle-dream sequence of a terrified dancer compelled to visit the morgue in the basement, room 22, of the hospital where she’s recovering. Shot on early b&w videotape (which Serling disliked, calling it “neither fish nor fowl”), the fiery explosion at the end is made even more surreal in this medium.

A top banger on most TZ lists, this episode offers the classic twist ending but with a totally unique, dialogue-less plot (until the very end). I don’t know what it is about silence that makes it so much creepier than conversation, but this episode shows how unnecessary language can be in motion arts. Agnes Moorhead’s transfixing solo performance is utterly captivating she fights the sinister toy-like invaders while inexplicably drooling at certain points. It’s also a masterpiece of dynamic lighting.

Hands down, my favorite, and incidentally, was directed by Ida Lupino, the only woman to direct a Twilight Zone episode. It’s sad and weird, and it features a very old man named “Jason,” and an homage to the Greeks perhaps, with its grotesque stage masks. This is TZ at its best—simple, theatrical, and has one of the more beautifully eerie twist endings of the series.