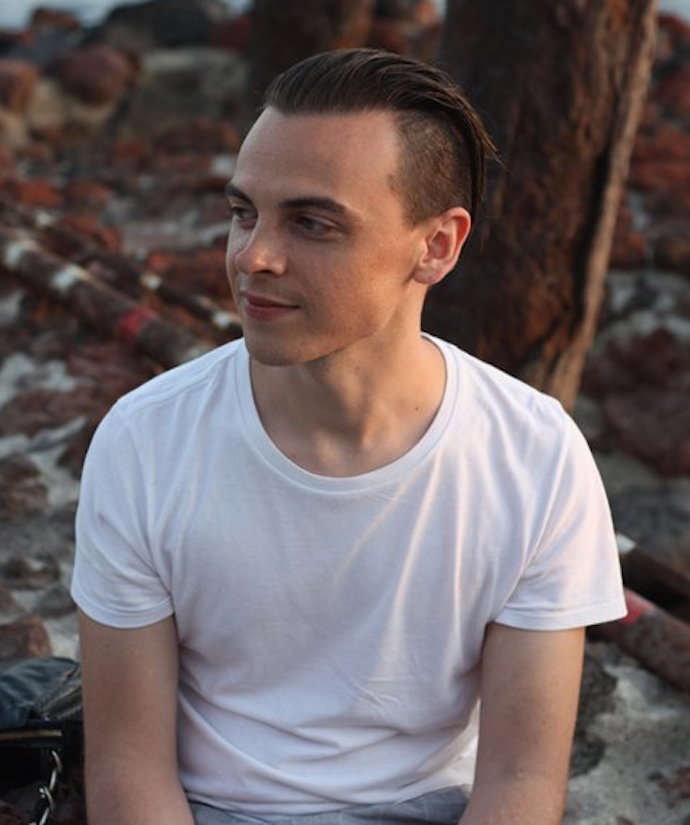 I had been aware of multi media artist’s Kiddie Punk work for many years. I really admire artists who have a singular unique vision and just mine it–to me their work feels like one long piece. When I heard he was releasing a zine called Teenage Satanists in Oklahoma, I thought, “HOW CAN ANYTHING WITH THAT FUCKING TITLE NOT BE BRILLIANT.” It’s my favourite thing he’s done.

When I look at his zines, it’s like Michael’s childhood home burnt down and he’s come back to find his bedroom in cinders, and he’s tried to piece together fragments of his childhood searching through the ashes, opening drawers full off embers and finding old diaries and teen magazines blackened by smoke, looking in old shoe boxes still smoking and pulling out burnt bubbling photos. He taken away what he can salvage and tried to assemble a scrapbook as a memory exercise; the end result looking like a cross between early Larry Clark and a black & white Xeroxed punk zine. Pages full of scrapbook words all distressed and photos of boys with marks across their torsos like they’ve been dissected, used up, and now were just empty inside with scratches over their eyes as if to unsee it all.

Kiddie Punk’s latest work is a short film series called “Cartoons” In 2013 he travelled to Oklahoma shortly after a massive, mile-wide tornado hit the town of Moore, almost wiping it off the map, killing 24 people and seriously injuring hundreds of others in the process. The images of destroyed houses and disfigured neighbourhoods captured during that trip, alongside dozens of interviews with the survivors themselves, form the basis of the 8-part series.

The first episode Zombies is here.

The rest can be found on his site here.

The following list is made up of films and books that center around children or childhood in some way. There’s so many great things on this subject, and list-making is always somewhat stressful because of all the things that I inevitably will have forgotten to include that should have been, but here’s some old and recent favourites that came to mind.

Birth is about a woman (played by Nicole Kidman, in a really great and quite strange performance) who believes a 10-year-old boy is the reincarnation of her dead husband. I think this is easily one the best films made in the last 20 years and it’s one of my all-time favorites. I was so infatuated with this film that I actually made a little zine with stills from the film just so that I could carry it around with me all the time. It’s so mysterious, at times exhilaratingly so, and every time I watch it, I feel like I understand something different than the previous times I saw it. I can’t understand why this film is so underrated and under-appreciated.

A fairly recent obsession: the films of Hirokazu Kore-eda. I’d recommend all of them, but Nobody Knows is really special. It’s about four siblings that are abandoned by their mother and left to fend for themselves in their tiny Tokyo apartment. We see what happens as the days turn into weeks and months and each season begins rolling over into the next. This film is really excellent, as are the performances by all the kids. This is one of those films that sticks in your head long after you’ve seen it.

HENRY DARGER: IN THE REALMS OF THE UNREAL (John M. MacGregor, 2002)

I was late to the Henry Darger party, not sure why exactly, since he’s very “me”, but a couple of years ago I finally caught up. It’s super rare for me to become obsessed with (or, to be honest, even mildly interested in) an artist, but I really did so with Darger, and this book was recommended to me by a friend who told me that if I was going to read about him “this is the one” I need to read. And boy, was he right. This book is massive, heavy like a brick, and it’s over 700 pages. It’s also out of print. I found a copy from an art school library and devoured it, then spent a small fortune buying a second hand copy of my own because I needed to own it. Apparently the “Darger people” don’t like this book because it really goes way down into the dark heart of his life and work, but this is exactly why it’s so good. I recommend begging, borrowing, or stealing a copy of this book right away.

It’s safe to say that if you’ve only seen the theatrical cut of this film, then you really haven’t seen it at all. The “television version”, at 320 minutes, shows Bergman’s complete vision of the film. The director said that when he had to cut it down to 188 minutes for the theatrical release and remove much of the fantasy elements, he “had to cut into the nerves and lifeblood of the film.” It’s available as part of Criterion’s incredible 5-disc box set, which also has a making-of film (directed by Bergman himself) that, instead of killing the magic like a lot of making-of docs, somehow manages to enhance it. In my opinion, this is easily one of the best films ever made.

Peter’s work is the very definition of singular, so it’s hard to explain unless you’ve experienced it for yourself. It’s deeply complex, hyper intelligent and, more than anything, intensely emotional. He’s written many books (or just one continuous book?) but, in my opinion, Mine is maybe his best.

I love this film. Everyone knows Kiarostami is one of the greatest filmmakers of all time and he has made more than just a few masterpieces. Where is the Friend’s Home? is about a boy who needs to travel to a neighbouring village to return his classmate’s notebook. There is a simplicity and purity to this film that is just magic. It’s poetic, haunting, and filled with little moments where you find yourself extremely moved without knowing exactly why.

Ponette tells the story of a little girl who is dealing with the death of her mother, after they are both in a car crash. It’s a very good film, but what makes it particularly startling is the incredible and heart-breaking performance of Victoire Thivisol who plays the 4-year-old Ponette. She won the Best Actress award at the Venice Film Festival for her work, and I can pretty much guarantee you’ve never seen a better performance from a child in a movie.

I bought the video tape of this when it first came out. It was a special edition version that had the video encased in a steel box. It also came with a press-on tattoo of the Hanson logo. This “film” as made at the height of that brief, lovely period of Hanson-mania and it’s got interviews, goofing around footage, live performances, screaming teenagers, etc. It was cool then, and it’s cool now. If you don’t believe me, read some of the Amazon customer reviews, asshole. 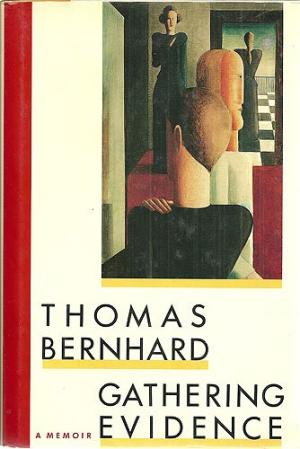 Thomas Bernhard is one of my very favourite writers, and this memoir of his childhood (originally written in 5 parts and published between 1975-82) is so, so great. I read this years ago but so much of it is still vividly ingrained in my imagination.The book recounts Bernhard’s childhood and adolescence, his early life with his family, his years at a Nazi boarding school in Salzburg, and his late teens when he was placed in a hospital for the terminally-ill after contacting pneumonia. It’s haunting, evocative stuff, and at times, morbidly hilarious too.

Victor Erice has only directed three feature films in the last 40 or so years and each one of them is a masterpiece. The Spirit of the Beehive is his first film and it’s another of my all-time favourites. It’s also another film with an amazing central performance by a child–this time by Ana Torrent (who also starred in the Carlos Saura’s great “Cria Cuervos” a few years after this). It’s hard to sum up what this movie is “about” as Erice’s cinema feels like it operates on so many spoken and unspoken levels, but it’s a film that captures a lot of the sensations, emotions and mysteries of childhood in a deeply poetic and haunting way.