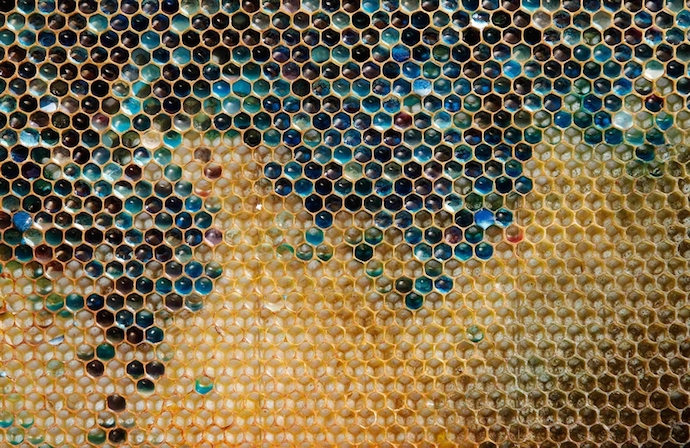 “I’m made of bees,” she told me. I declined to ask why, just nodded and leaned against the granite fireplace. The heat from the fire cooked me. I tugged at my collar. The sweater looked like something a fisherman wore—it had been advertised as something a fisherman once wore. “You’re sweating,” she said. Judging by simple probability, I believed the fisherman to be long dead. I winked at her and tugged more. “Would you like to get out of here?” I asked. She sipped her wine. White wine with a slivered remnant of an ice cube. Her elbow had sustained damage. A chrome brace scaffolded it. She fished the ice cube out of the glass and gripped it in her other hand. She made a fist until water fissured out. “Is that a no?” I asked. She laughed at me, crossed the room, and leapt off the balcony. She laughed all through the drop. I followed her. For a moment we were both in midair. Lush gardens broke our fall. She lay in a squash plant with squash in her hair. I knew then what I know now—there are simply no mistakes. I complemented her ankles and she tsked at me, clawed seeds and pulp from her raven locks. “Pick another part of the body to canonize,” she instructed. I said, “Elbows,” and she scowled at me. I scowled back and said, “Lips,” but she called me bourgeoisie. I threw up my hands and exclaimed, “Ass!” and she threw up her hands as a form of mockery and demanded that I invent some new anatomy. She stormed out of the garden, a leaf of kale spiked through her heel. I followed. I left an imprint of my body in broken asparagus.

We ended up in a ditch after my driver rolled the car. She corrected me—she called it a gulley. She called the driver a drunk. I asked her to show some sympathy. The man hadn’t eaten in weeks. She laughed and said, “Gin and gin and gin.” She entered the woods. The trees? Indigenous. I told her so. I picked up rocks and described their vast history. I scraped the trees with my pocketknife and gifted her the shavings. I acquired the knife years ago in a seaside brawl. “I was a seaside brawler,” I said. By that point she had a fire going. We were miles from anyone. There were few in those days. By that point the world had whittled down to a clique. I finally answered her: the area between the navel and the breasts. “How can you fetishize the upper stomach?” she asked. I said, “I thought we were canonizing.” She told me to put it in a cannon and blow it out my ass. I said, “Fine, a third hand,” and she pointed out that extra hands were merely repetition, and I was forced to agree with her. We held our hands to the fire. Broken glass chimed in her hair. I sang a song about a seaside brawl I’d been in, the numerous faces I’d punched right through. She didn’t respond, just stared at the fire and brought her knees further and further into her chest.

In the morning she was gone. I walked toward the road but couldn’t find it. What I mean to say is that I re-discovered the wreck of the car, but the road had vanished. It was a trick; I was wowed. My feet bled. My sweater unraveled on a million tree branches and what remained looked like a fucked approximation of lace. I couldn’t remember her name. I walked for miles. I think it was miles. My feet deteriorated and the bones spread apart until my feet were toothless mouths. The trees thinned into balding grass. She was nowhere to be seen. The land dwindled. I walked along the pliant body of the earth. It asked the same question. I was silent awhile. I theorized a cube, rising and falling with the coming spring, coming out of our chests. All of our chests. The color beneath the skin glows a pale green. The color grows in me until I’m one color of green. The horizon is a source of collapse. The body beneath me let out a fantastic exhale and I knew I’d gotten off scot-free.

William VanDenBerg is the author of Lake of Earth (Caketrain Press, 2013). Recent stories have appeared at The Collagist, SAND, and Pear Noir. He lives with his wife in Denver.