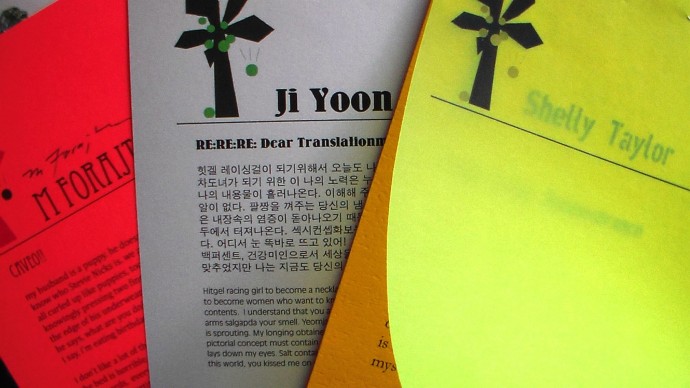 Friends, whether you choose to wipe the anticipatory drool from your chins or wear it like a badge of honor, the Coconut Books 2014 catalog is upon us. Literally, it’s a lot. There’s a heap of brand new stuff already available and by the time June is here you’ll be able to explode open your eyes all over again with: Jennifer Tamayo’s YOU DA ONE, Natasha Kessler’s Dismantling the Rabbit Altar, and Emily Toder’s Beachy Head. And, thanks to Coconut, you’ll also have the option of spending the later half of this year reading new books by Bernadette Mayer and Danielle Pafunda. I guess the whole perpetual state of anticipatory drooling is what the staff of Coconut Books is all about. I recently had the opportunity to visit the Coconut table this year at the AWP conference in Seattle and instantly found myself overwhelmed by book options, forthcoming book options, and a really impressive collection of author-signed broadsides. (I particularly enjoyed the phantom page that semi-conceals the lines of a poem from Shelly Taylor’s Lions, Remonstrance.)

Coconut is currently reviewing submissions for the annual Joanna Cargill Coconut Book Prize for a First Book and the Elizabeth P. Braddock Prize for poetry and—incredibly—neither requires a submission fee. That is just how Coconut rolls. (See what I did there?) 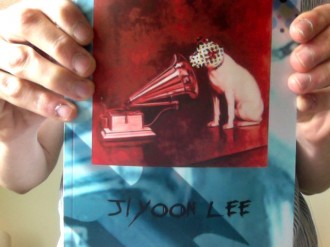 I published Ji yoon Lee’s debut chapbook of poetry IMMA in 2012. I guess this means I have an obvious predisposition when it comes to Ji yoon Lee. Is that predisposition problematic? Well, you’re probably pretty boring if you think so. Or a Tea Party Republican. Here’s why: when it comes to contemporary poetry I think Ji yoon Lee is one of America-Machine’s most charismatic resistors and this debut full-length collection exemplifies one(?) hell of a language(s) driven prison-break escape from the far-extending reach of Father English’s leash. How does the speaker of Foreigner’s Folly know if she is speaking correctly? How will she know when she has mastered the English language? Mastery is what it’s all about, right? (English is never a foreign language, right?) “I wanted to be an complete sentence but I was article short.” Like Bakhtin, Lee champions polyglossia over a dominant singular language made Truth via arbitrarily assigned ‘standards’. The compactness of her travails is often only further compromised by spellcheck squiggle scarification, brilliantly mocking the initial goal of spellcheck squiggles: to signify incorrectness. In Foreigner’s Folly, the alleged ‘incorrectness’ lingers beyond MS Word, only to bleed even louder on the physical page. Lee’s debut collection is pro-multitude with plenty of attitude, a bilingualism struggling to make sense of a violently nonsensical atmosphere. I will not be soon forgetting the speaker’s daily conversations with roadkill (“Why won’t you answer my phonecalls?”) or lines like “Today I wrote a suicide note / but I needed someone to proof read it for me.” 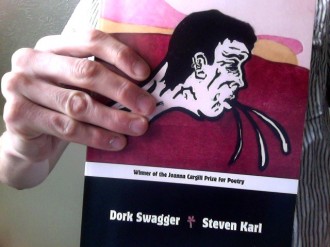 The poems of “swagnasty” Steven Karl’s Dork Swagger sometimes transport me to the era of a still unexplored childhood backyard or to my earliest memory of drinking with that one friend on that one porch on a night when the conversation felt like it would outlast history’s noisiest VCR. “There’s only so much music in this liquor. / The sun so slow & long. Summer hornets fist-sized. / & so angry something is shredding / Trees one rip of bark at a time.” I picked up this book because the cover image looked like a Beetlejuice-ified Reagan sandworm. It’s funny for me to think of this now after reading, “When you look at a book, the cover has as much / Value as the text, as the image, as the back cover, / As the table of contents of humanity is equal / To plane level at credibility minus scrutiny.” College students in America who protested the war were fucking dissidents as far as Reagan was concerned. And Karl celebrates our nation’s dissidents by launching a syntactical 80s free-for-all of “SK8 OR DIE” and “CLUB HOMEBOY” and other various notions of ‘freestyler’. Dork Swagger reads like the lyrics of a song you’ve heard hundreds of times and never get sick of. A song that you’ve memorized with a little help from your friends and your enemies. It sounds the way the “Star Spangled Banner” should  sound. Like that one Joy Division song. You know the one. 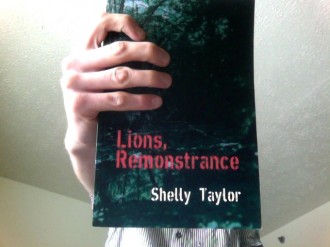 “The lion grandly pacing lines running deep the outer edges, barred / to the public, a stallwalker. I have been him & his father, the monsoon bang,” What a gut-wrenchingly heavy backpack trek this was into love and warfare. As I read these chock-full, folk-full poems, Taylor’s unrestricted language—sorrows, travels, joys, dreams, vows, grief, blood, upbringing—Mattie Ross’d all around my head all tumbleweed-like (collecting and motoric more and more gaining here and then) all while I sometimes swear I heard that Norma Jean version of “Tramp on the Street” mutating out of and back into Hank Williams, Sr.’s “Tramp on the Street”. A book of war (“Like a town on fire: so won so lost”) and a book often exploring gender (“& neither do I want a bath or the linear world I’m supposed to / sashay through a lady. We fought the silence, the men inside us—”). A book of duets of wound and animal, Lions, Remonstrance will collision into you with its sprawling geography of memory and its recurring lion surname: a circulation of veterans, of trauma, of loss. “Let’s make these sheep / into horses he’ll blind and astonish as me, the very land / mourns the eye holes of the horses women must gather.”