And the journalists Laura Ling and Euna Lee are free. Well, technically they’re pardoned, but if all cartoon depictions of Bill Clinton’s prowess are true (i.e. The Simpsons, Family Guy), then who better to negotiate their release than Bill, though I’m sure John Bolton and Rush will still disapprove. What were those two journalists doing in North Korea anyway? I’m sure we will see and hear their story in a documentary some time soon, but for now enjoy this image taken straight from a lost Wes Anderson movie about the global adventures of two wealthy, respectively revered, but usually misunderstood world leaders. Just kidding, it’s from the New York Times. 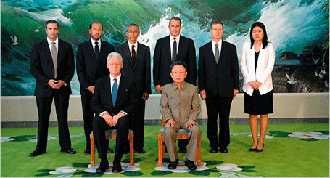