Christmas Presents Full of Nothing: A Review of The Sarah Book by Scott McClanahan 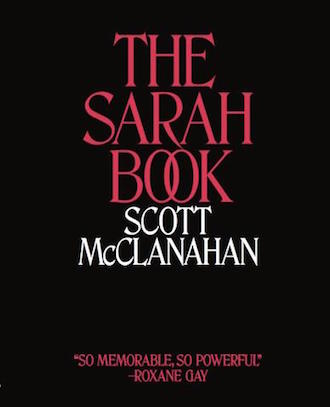 Over this past year, I’ve often thought about the craft talk Christine Schutt delivered while I was a student at Washington University. The premise of her talk was something like this: in the first page, sometimes even the first paragraph of a story, there should always be a sentence that gestures toward the heart of its interests. By the end of the story, the author must deepen and darken that sentence so its meaning is transformed completely. It’s an almost mystically elegant idea (always the first page? every story? really?), but in The Sarah Book by Scott McClanahan, it rings with what feels like truth: between the first page—McClanahan’s dedication not to his ex-wife, Sarah, but “to Julia,” his current wife—the book’s opening paragraph—“There is only one thing I know about life. If you live long enough you start losing things.”—to The Sarah Book’s closing scene—a meeting, years after the divorce, between Sarah and Julia.

From the beginning, McClanahan wants us to know that this book is an attempt to give something to Julia, an attempt to share fragments of memory with the knowledge that they will be deepened, darkened, and transformed. From the beginning, The Sarah Book raises a question of its efficacy: What can he contain in a story that’s all about “losing things”?

To provide an immediate and obvious answer to this (rhetorical) question, McClanahan’s book contains a collection of moments, sensory textures, and observances that somehow accumulate into the precise fucked feeling of post-divorce existence. He gives us his post-divorce apartment, the slow seeping ssssss of the air mattress leaking, the hole in his blinds cut by a previous tenant to see when the cops were coming. He gives us a bottle of urine, a bottle of Children’s Tylenol, his guts full of garbage food and beer in the Walmart parking lot. He’s all but mastered the art of what I will heretoforth call the poetics of stupid decisions: that sing-songy internal narrator who echoes from the darkest pits of our consciousness, who orchestrates all of life’s most resonant ironies.

There’s Sarah’s voice saying “I’m worried about you,” seeming to magically emerge from the creek eek of the piano top where McClanahan hides his booze, seeming to just as magically vanish as the booze renders him “invisible.” He recalls a lie he told his mother in 6th grade when he forgot to throw away the wine bottle he drank from: “It must have evaporated.”  And it’s true: our worst mistakes have a way of evaporating, permeating the air with a foggy, amorphous guilt. After burning an old family Bible, McClanahan notices a man at the gas station whose skin looks burned. The fog hovers above him and Sarah as they “[fight] about nothing and [fight] about everything.” The fog starts to weirdly personify itself as McClanahan talks to the chicken wings he’s eating.

Then they laughed some more like maniacs and the chicken wings told me I was going to lose my mind starting now…They said the planet earth was dying anyway and they said the end had come and it was the Day of Judgement…They said human beings were done and the chicken wings were taking over. I just leaned back in my seat and smiled and said, “This sounds like a good time. This sounds like fun.”

McClanahan also mines such poetics from moments of tragicomic misjudgment. There’s the moment where he heightens an argument by pulling out a hair from Sarah’s chin, believing it to be a piece of stray fuzz. There’s the moment where he wonders if their divorce is the result of an unfortunate nickname he gave Sarah, her reluctant adoption of that nickname. His best intentions—our best intentions—evaporate, sucked up in a cycle of poetic stupidity, the same cliches that make up all the books and plays and stories ever written. Watching TV in a smoky room with his father-in-law, he learns: “there is no such thing as new water…that the original water came from the Milky Way millions of years ago…And so we are all made of water then. We are all made of what came here and collided and allowed something to be born and none of it is new.”

This understanding—that there is no “new water”—informs so much of The Sarah Book’s beauty: the recognition of all the experiential accumulations that can be shared between two people. McClanahan tells the story of his first meeting with Sarah when he was a kid and she worked at the mall, how their relationship began when he attempted to replicate that meeting years later, how—in a similar sense—“the little boy grew up and wrote this book.” He attempts to fill the book with fragments of shared memory, with pictures of their children, images and invocations. In a few fascinating moments, he even attempts to place himself inside of Sarah’s body, imagining her thoughts and feelings in memories he did not witness himself: her early childhood, her abortion. On a Day of Debauchery wherein he and Sarah eat obscene amounts of food and share their secrets, McClanahan learns that Sarah is bulimic, that she’s concealed an inner life of consuming and purging, consuming and purging: all the shared accumulations of a life, cycling through another body he can never truly know:

I ate pizza and I ate cookie dough. And then we started making plans. We talked about the murders we would make, and we talked about what banks we would rob. I felt my belly fill full and then I went to the bathroom and I was purging…I felt my stomach grow empty and rumbling and ready to be filled full again. I pushed the toilet handle and I watched the throw up islands disappear down the toilet in a cyclone surge of water. I wiped my mouth from throwing up the whole world and when I came back we talked about hijacking planes and we laughed. We talked about our revolution and the toppling of governments and the History Channel docs they would make about us one day. And we would do it together…We talked about taking over the world and how there would be only us. And so I shouted it now, “There is only us, Sarah. There is only fucking us.”

Of course, these are self-conscious fictions. There will be no toppling of governments, no History Channels docs, no us, except within the pages of this book, and McClanahan expresses equal parts wonder, horror, and sadness toward this storytelling magic. He contains this collusion of emotions and artifice most poignantly in a Christmastime memory, a scene where he gives Sarah a series of small presents with “messages” written to her by relatives who have passed away. She opens these presents with a combination of conflicted appreciation, anger, and shock at his narrative audacity, telling him to “shut-up” because he doesn’t know what he’s talking about. He doesn’t know these people. He has no claim on their lives. It is then—McClanahan writes—“I saw that there are other presents. And they are full of nothing.”

They have notes that say: There is not another world. There is only this one. Your memories are just the dumb voices inside your head. Love is just biology and the urges of animals to pass on their genes like rats. There are others from grandmothers who say: We just wind up ashes in a stranger’s home. Others from mothers who say: You were always annoying. There is another from your father who writes: Thank god, I’m dead. We were never close. And we never knew one another. Never.

This brings us to the ending of The Sarah Book: the meeting of a past and present us, the deepening and darkening of this dedication “to Julia.” McClanahan longs to dedicate this meeting—this story of Sarah—to Julia, longs to share Sarah’s humor and strangeness, hoping that “maybe she’ll tell that story.” But the meeting is underwhelming: Sarah isn’t especially funny, their conversations are not especially revelatory, and no one is telling “that story.” McClanahan realizes, ironically, “that story” does not need to be told, because we are all Sarah: “all I could see was Sarah now…the rivers were a Sarah and the sky was a Sarah and the mountains were a Sarah…Then I smiled and I saw my face in the window but it wasn’t my face anymore. I was a Sarah too.”

The Sarah Book is far more than a letter to Julia, an archiving of Sarah, or an apology for the author’s mistakes (although it is all of these things, an accumulation of so many parts). It is an observance of both collected and collective loss, a nod to all the Sarahs that cannot be contained within this book, but hold it, and read it, nevertheless. The Sarah Book is a loving gesture to the fullness of the emptiness inside of us, a love note to our Christmas presents full of nothing.