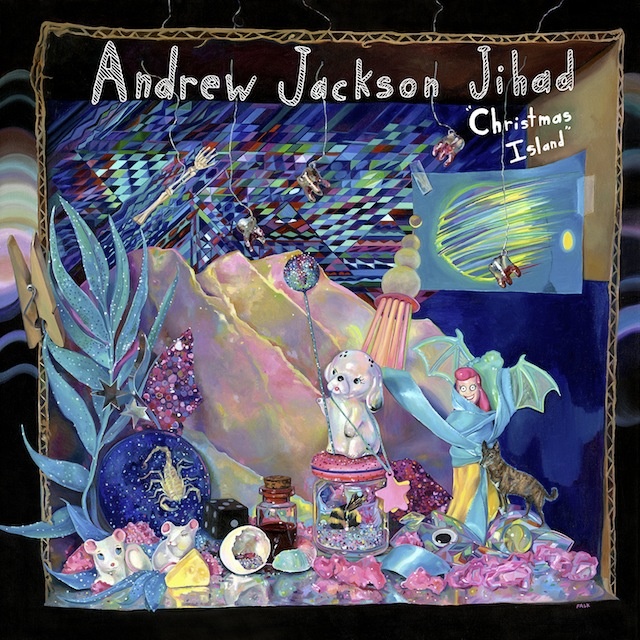 “The older I get, the more articulate I am at whining”

This review is dedicated to my wife, who has made it a rule that under no circumstances will any Andrew Jackson Jihad be played on open speakers inside of this house. Andrew Jackson Jihad falls with other blacklisted artists including Radiohead, Bonnie Prince Billy, and any instance of late 60’s satanic pop. This review is for all of times I listened to this album in my car out in the parking lot.

It is not hard to see what caused this particular embargo. Andrew Jackson Jihad is a part of a style known as folk punk, which combines the grit, DIY ethos, and anti establishment sentiments of both styles. Folk punk is the perfect marriage, making punk more relatable and folk appealing to a younger audience. Folk Punk began in the 80’s and 90’s and rooted itself in the 00’s with acts such as Defiance Ohio, This Bike is a Pipe Bomb, and, Against Me!

Andrew Jackson Jihad came to this style somewhat later and are approaching their ten year anniversary. Whatever happened within this decade, however, has been for the ultimate joy for some and grating annoyance for others.

It is also not difficult to see why Andrew Jackson Jihad found popularity with its audience. With only two core members, this act is made up of underproduced folk pop melodies littered with acerbic commentary ranging from the humorous to the horrible. The band’s 2007 record, People Who Can Eat People Are the Luckiest People in the World, culminated with a song, “People II: The Reckoning,” a satire on the Simon and Garfunkel song with the rousing anthem of:

I can already see your faces, but some of you might seem intrigued.

I think I should mention that I completely understand how this band diverts its listeners. Andrew Jackson Jihad has always been the band that can divide its audience down two stark paths. One of these paths  does not connect with the grating commentary, which comes at the speed of nasally whine. There are others, however, who do get it and find Andrew Jackson Jihad employing a melange of references that border on the poetic, the absurd, and the absolute fucking insane. The untrained voice of Sean Bonnette is really the only logical conduit for these types of lyrics.

Andrew Jackson Jihad’s fifth album, Christmas Island, does the exact same thing that has been done in previous records, yet this time with the backing of strong production. Though this may seem trivial, the product contained is one of the best albums the band has released and may be the album that converts long time detractors of this band. Oh wait, nevermind, that could never happen..

Christmas Island sees not only a switch to SideoneDummy from Asian Man Records, but the transition is also marked with new producer John Congleton, whose work can be heard in the Paper Chase as well as The Polyphonic Spree’s The Fragile Army. While I already mentioned production I feel that it bears repeating that the warm embrace of more lush atmosphere compliments the concrete frankness of the band. Though the album starts and ends with similar sounding folk punk that marked earlier albums, it is Christmas Island’s mid section that makes up not only the most interesting work on the album but the best the band has ever produced. It is this area where the band reaches its most sublime and, potentially, steps closest to embracing its audience without barbwire.

I think it was the one about the HaleBop death cult, or the one about Kokopelli face tattoos, or even the one about him losing his shit at a video installation in a museum. Whatever, the song, each story on Christmas Island is filled with memorable imagery that straddles between the mundane and the surreal. The band’s attempt to fill pop songs with tacky pop culture references comes in a tapestry of kitsch, which sometimes gives way to beauty. I feel it is important to note that even when the band talks about Xbox’s, power violence bands, tanning booths, Bad Lieutenant 2, and kids drinking juice boxes for breakfast, there is a goal. As weird as it may be, there is a desire to strip away expectations of beauty to somehow redefine astounding emotion through everyday experiences. Andrew Jackson Jihad has always done this, yet I feel Christmas Island may be the album that makes it the easiest to understand.

“Rock out in my Dreams” is not a particular important song on the album, rather one that sounds like a conclusion on in the middle. In it, the youthful fantasy of rocking out conflicts sharply against the growing age of its singer. The production swells with chaos and hints of optimism in the solace that in sleep, nothing can harm the singer. Honest lines like “the older I get, the more articulate I am at whining” set the tone for an odyssey of resigned failure. This sort of strange connection with reality is sobering even though it contains the line “sweet dick denim jacket.”  I feel it is this song that illustrates Andrew Jackson Jihad’s relationship with the world as one of utter irrelevance yet amazing poignancy.

Christmas Island is an album that has personally affected me on many levels. This could also mean absolute dick to someone  who can not get past the multiple hurdles this band throws in front of themselves. I sometimes wonder whether or not it is better to be liked by many in the middle or revered by few on the end. I can tell that if nothing else, Christmas Island will give you a handful of phrases that will be memorable for weeks on end. Whether or not those memories will be of joy or irritation is something that will be up to your own personal experience. Thank you to my wife who also had to begrudgingly edit this article. May be through this lengthy disposition she will come to understand. Most likely not. Nope.