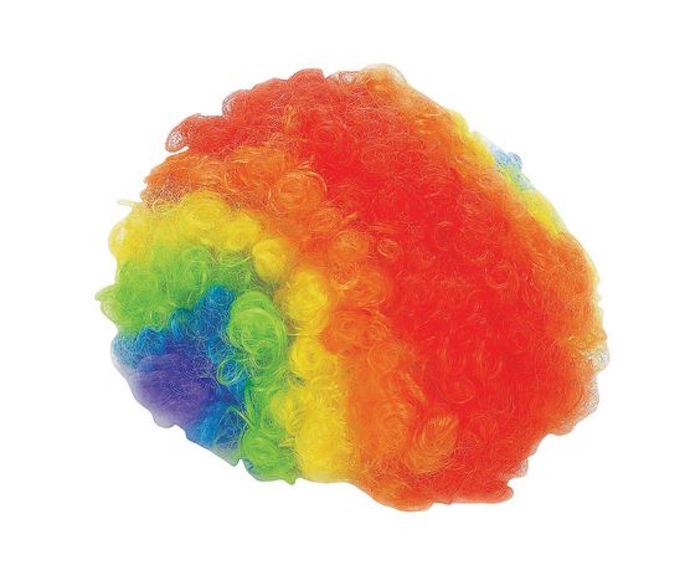 In eighth grade, I joined the Clown Club because I liked costumes. Clown Club was led by Mrs. Murphy, who also taught us grammar. Mrs. Murphy liked rules, because when you know rules, you can make different kinds of people listen to you. Grammar is a language, she told us, not a shame. There are many languages, but rich white men hear grammar well. It is the sound of their power. It is a dance they have. Mrs. Murphy was lit.

Being a clown was a language too. Every two weeks I brought a green-and-gold duffel to school. It carried greasepaint, a floppy yellow shirt, floppy polka-dot pants, striped socks, and a butt pillow. The butt pillow was my favorite because it was the most comfortable. After dressing in the bathroom, we all loaded into the beige school van and drove to work together. Everyone fought not to sit in the back, because three years ago some kid sliced open the seats and stuffed their lunch inside. It didn’t smell, but it looked like a wormhole.

Mrs. Murphy drove us to the Ronald McDonaldhouse to play with the siblings of sick kids. Sometimes we played with the sick kids too, though usually they just looked at us, eyes like pale blue milk. If they smiled we were doing it right. If their parents could fall asleep we were doing it even better.

The most important work we did at the Ronald McDonaldhouse was magical: we made time visible again. We brought tempo. (As an example, listen to the Talking Heads’ “The Big Country” and try not to dance at 4:30. I am not saying the Talking Heads are clowns.) In hospitals—as you might already know, dear reader—time is all fucked. Is the medicine working. When can I go home. What is that. No I don’t care about food. It’s all roller-coastered. This is not a criticism of how little doctors know—all doctors, including my grandmother, her seven kids, and her high school degree. They know a lot: it’s an understanding of how complex bodies are.

Time is especially important for healthy siblings, because for them time doesn’t really exist. It just drags. Siblings spend days (weeks, months) waiting in fluorescence, eating pudding cup after pudding cup. So we clowns developed games that fit into these never-ending loops, and then we added rewards. Candy, or toys. We dressed the part too. No bloody mouths or lower teeth. Nothing bruise-color. Once I spent forty-five minutes hiding a plastic egg behind my back, finding it, cracking it open, and waiting for a healthy three-year-old to guess which half held the troll doll. He clapped every time. His mom got a nap. It worked.

“When a clown enters the ring,” writes circus scholar Paul Bouissac (very careful grammar here), they “take possession of the space for the purpose of making the space produce meaning.” As a teacher, I argue: do I own my classroom? Do I make it produce meaning? Nope. But as a clown, I can intervene. I can make us swerve. And then we’re all in it together, independently. As an example, Bouissac mentions André and Cesar Dias, brothers and clowns at the Zirkus Charles Knie. Their act starts when André steps onstage, takes off his hat, and starts swatting a mosquito. Soon he needs a broom. Soon the mosquito lands on the head of a person in the front row. Besides asking everyone to look closely at the same thing—which in fact we can’t see at all!—André is establishing tempo: a rhythm that continues until the act climaxes. (Or the mother wakes up, or we play a different game with the troll doll). What I love most about this kind of possession is that it’s non-hierarchical. Are we supposed to help Andrés swat the mosquito? Maybe. Maybe not. Once a girl just asked if she could sleep in my lap. I said yes, and then I rocked her to sleep.

Frank Avruch, Boston television’s Bozo the Clown, is also a clown scholar because he played Bozo every day for twelve years. For Avruch, the act started when the television switched on, and it specifically involved childcare. “We were on at a wonderful time,” he told Jay Blotcher of TV Party. Five o’clock at night. “Can you imagine anybody putting a kid’s show on now at 5 o’clock? It was a perfect time for parents who needed a little rest; they would sit the kids in front of the TV.” Avruch also points out that clowns need to be careful, since clowns are children’s friends and children imitate their friends. That little boy is likely the only person I ever made myself smile for, again and again. Eventually I was smiling for real. I asked him how he felt. If he wanted to keep playing. He usually said yes, so usually we did.

I went to high school, and after high school I went to college. The whole time I knew I was a writer, so after college, I looked for writing work. There was some of it, in 2006, and I did it well, and I was lucky not to have student loans or major health issues (retrospectively it was wrong for me to be off anti-depressants, though I couldn’t’ve afforded them anyway). A friend let me rent a chocolate-colored room in her Chicago apartment, all summer for $300 bucks a month, next to Polish stores with cheap pickled tomatoes and sourdough, and this was lucky too. But while the work was immensely satisfying on nearly all levels—the people I met then are now family—I couldn’t breathe through the constant financial anxiety. More accurately, I didn’t know how to do the work as anyone other than a twenty-one-year-old girl. And I didn’t want to be her forever.

So I looked for more work. There wasn’t any. I needed suits, different degrees, a better bank account, the family hookup, a quieter mind. Something. By winter I couldn’t hear difference between the noises. To be clear: I was also brilliantly happy. It is possible to be happy and poor, not because poverty is simple, cute, or pure—it’s not—but because we are all always more than one person at once. That twenty-one-year-old girl and I still wear the same color eyeshadow.

Later that winter I went on a date, and we found a book for fifty cents: Balloon Sculptures by George Schindler, a Brooklyn kid who is now eighty-seven and the lifetime dean of the Society of American Magicians. “Most of the animals we will be making,” writes Schindler—(we already are, we are already making): require ten bubbles and three lock twists. The proportions, or sizes, of the bubbles will vary. The length of the tail will change from animal to animal, but the basic twists we have already learned will be very much like the Basic Dog. Learn this one, and you can do all the rest merely by alternating some of their proportions.

Learn this one, and you can do all the rest. I decided to be a clown again.

Being a clown again wasn’t that different from everything else in my life that wasn’t being a writer. I found a costume and I put it on, just like before, and once again it gave me a completely different set of powers. This time though the beige van was the Damen bus, which I rode North to the part of the neighborhood where people still listened to Liz Phair but had like, mortages and marble countertops and expensive baby strollers. This time, my costume was all my show-going clothes at once: the sparkle blue lace gloves that eventually melted onto a radiator, the magically expanding red petticoat, the jewelry I pinned into my hair like a beaded wig. I used to wear sunglasses on the bus—never around the kids—until I realized no men wanted to talk to me anyway. I looked too weird. And since I usually wore a binder at shows, I wore a binder as a clown. This was the only part of my wardrobe that wasn’t a costume. It was a secret. It made me feel safe.

Being a birthday party clown for rich families wasn’t so different from working at the Ronald McDonaldhouse. This time, the limelight child would be high on sugar, not stoned on painkillers. Siblings still floated at edges. The parents would be tired. There would be vocabulary to learn about a body—usually architectural, or pregnant. There was always way too much food, so I’d be given a plate to take home. Again: bodies are complex. I was still a clown.

I loved that job because it was all mine, and I made people laugh and I wore glitter with sincerity, and I ate cake. Writing necessitates isolation, which is hard for me, so leaving that lonely chocolate room for bright lights and happy kids was often a gift. Once again the goal was to see a child, for them to see me, and then for us to see something together. I brought face paint. I made balloon animals. We thanked each other and said we were beautiful. If we had extra time I taught them fortune telling, or magic tricks to show their parents. Whenever I returned a pack of night-sky-peacock-feather-faced kids to the party, ready to make magic for their families, I’d done it right.

This is not an elaborate metaphor. This is a story about the work I did when I was really learning to write, which of course Mrs. Murphy had already taught me to do anyway. Find your language, not a shame. Write your power. I already had pages of work but nobody had—or will—ever read them. This is an important part of being a writer: you write, which is work, and you work in other ways too, and somehow the lights stay on, and then you keep them on.

While learning, again and again, to be a writer, I was also a birthday party clown, a bookseller, a wholesale pumpkin pie baker, a house cleaner, the doorman, escort transport, an eco-friendly washcloth copywriter. I was other people too. I kept my lights on and on, which means sweat but also luck. I wrote I wrote I wrote. Eventually, because of the corners and gossip I knew from my jobs, I became involved in intersectional politics beyond the dancefloor, and I started working for nonprofits. I decided I didn’t want to wear costumes anymore, so I gave the box of clown gear to the kids across the alley. They loved it. They took a white balloon and made a swan, and they left her on my stoop.