Cada día, cada día and How to Get Through the Next

I left for Madrid on Monday morning and returned on Thursday to the alternate world of an already morphed reality. The remnants of our extravagant Alicia en el pais de maravillas party were strewn about like morbid reminders of our fascination with duende, of things being turned absurdly on their heads, and reality being a mirror.

The deflated balloon garlands flopped over a fresh batch of unfamiliar empty cans: gaiety matured too soon to grief.

“Enthusiasm for” and “experience of” are different things. 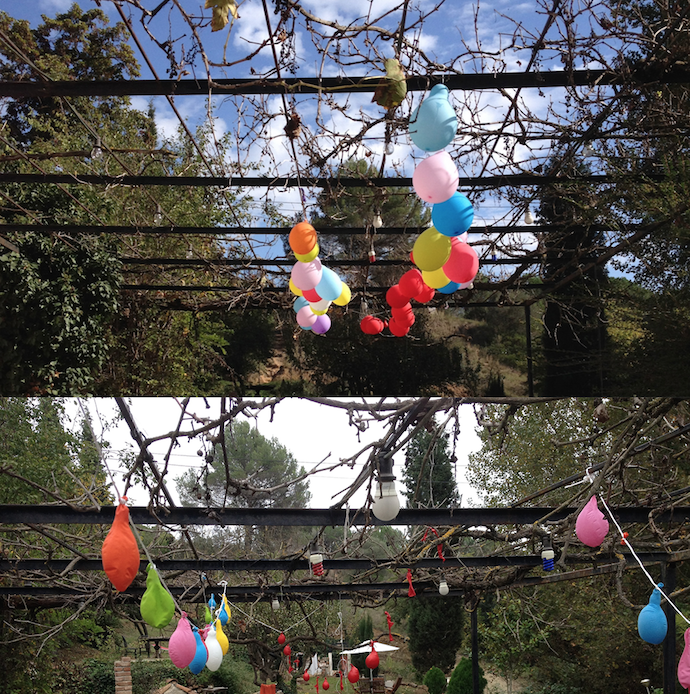 B, eyes red and face drawn, told me what happened while numbly loading the dishwasher. On their way to Collbató the evening before, Hat Boy and his Best Friend climbed an electrical tower for a clearer view of Montserrat. She said those two loved each other and climbing things – the trails, the teepee frame, the trellis over the dinner table. The rest of the group remained below, probably laughing at them as friends do. Maybe someone urged them not to climb. High above the rest, it must have been a simple moment – one of the grand kind – two friends sitting touching elbows at a pretend eye level with Montserrat, whom we all love like a mother. The strong lady of Catalonia, she demands your eyes, your thoughts, and most of all your trust: she is humble and striking, an imposing comfort, and she holds you close always. She is la muntanya magica.

Best Friend took a wondrous breath and in the middle of exhaling, “Can you believe how beautiful she is?” he was electrocuted, died, and fell.

They’d been sitting side by side–how close to death can you get before you feel dead yourself? The weight on the house was too much to bear and crushed us to vulnerable states. Brave and catatonic family soon arrived as S and I haphazardly moved out of our room to ensure they had private beds. Hat Boy was instantly skeletal with heavy eyes. He stopped wearing his hat but accepted a blown kiss from S with a smile that plaintively bore his soul.

H passed me in the halls muttering “Cada día, cada día,” with his bandana’d Bill Bailey hair emphasizing each incredulous shake back and forth.

And how to get through the next:

Every effort toward levity felt inappropriate and increasingly desperate. Sara and I warbled “A Change Is Gonna Come” for K while brushing our teeth in the kitchen. She cried from laughing and we high fived as 1 euro toothpaste dribbled on the tile floor. What else was there to do – there was more to come at home but I was in the dark.

I email S a list of titles for short stories I joke I’ll write:

1. Duende Schmuende (But Really Though)
2. I Went to Toledo in a Dirty Shirt
3. Grief Seeps

V was crying in our kitchen on Saturday and suggested the two sides of the house come together for dinner. “We have a lot of feelings over there. I am sure you are having feelings too.” It was like following a sinking ship underwater, or trailing behind a deflating balloon.

2. Re-read the list when you are supposed to be working. Maybe cry.
2. Throw the list in recycling. Pretend that’s enough.
2. Regret writing it. Use the back for scrap paper in a forced display of fake indifference.

Both sides made pasta, which proved to be self-portraits. Ours was a pantry emptying one, a “must-go” before the house closed for the winter. We threw everything we had into it out of necessity and sympathy–a colorful offering in a time of numb neutrals. We reserved the pasta water and congratulated ourselves for this miniscule dose of cooking knowledge. Newcomers improvised on guitar and harmonica in front of the fireplace and I was at once grateful for their innocence and grappling with my dirge-oriented mood.

The Norwegians made a thick creamy alfredo–heavy, decadent, comforting and articulate. There was nothing makeshift about it. Focused in its grieving, it weighed down the serving ladle. They had not needed to improvise, as we had. Where we had a vague sense of scattered trauma, they possessed elegance.

3. Record every negative feeling you are experiencing. Like “word association,” play “emotion association” with un-, in-, is,-: -motivated, -secure, -sular, -olated. Process each as truth and misconception in equal measure. Work toward acknowledging and/or dismissing each. Call yourself out for being a closed off baby. Draw the blinds and let your phone die.

Shuffling around their kitchen, we cried in different languages and understood most things. V saw me and S and cried, “Mis guapas! The guapas!” and pulled us into a hug murmuring, “I could have lost two. I could have lost two.” (The last time she’d called us “mis guapas,” we were in character as the Tweedles at our Alica performance. In gold and black facepaint, we’d theatrically presented her with long red sequined gloves and dubbed her the Red Queen of the Night. “Mis guapas!” as she set down a lipstick stained can of San Miguel and showed off the gloves to the party.) She was radiant in her grief and we were a twelve-limbed creature – an Aristophanes mutant coated in snot and tears. Later, Hat Boy tried slinking by everyone in the kitchen to make it downstairs. S and I turned to face him and he paused. We all gaped silently, trying to say anything. I gave up and held my arms out instead. He accepted and we pulled in S. I’d never held sadness like that except within myself in the following months. He said, “It’s hard to carry on but it’s good to see people living.” They were the simplest words I’d heard about grief.

A drove me to the airport a few hours later as I choked words out around dry sobs, realizing I had just learned the most I knew of love from two pots of pasta and one hug.

She told me her path from Norway to El Bruc, about failed marriages and beautiful children, and that “Llobregat” is the river – a question I’d finally thought to ask. We crossed the Llobregat on the way to the airport and the bridge itself felt like a riu. Her dog with the David Bowie eyes sat in the backseat, nosing my duffel bag. My left arm cramped from reaching back and holding his paw. By the next week, I had 60 flea and mosquito bites on my face. They are now scars.

So thank you, David Bowie dog.

5. pause and distance: list each good thing caused directly by the list generated from prompt #1. If you think it exists, it exists. Just take some good where you can find it, or haven’t you learned anything.

Final count (not including self realizations): 1.
I do not miss cigarettes.

The kiosk prints one ticket out of three and politely requests I stand in a longer line to answer any preguntas. After a short eternity of switchback lines, I step up to the counter, slam my bag onto the scale, establish weepy eye contact and state, “He comprando tres billetes para hoy pero la maquina dice que solamente hay uno.”

Tap tap tap…pause… he inhales but then registers the fury and fragility on my face and calls over his superior.

I try feinting calmness (not a shred of which I possess in this moment). The woman interprets it as me not understanding and restates in English, “Your flights–they are canceled. Between Amsterdam and Oakland, there is nothing.”

No, lady. I understood. Everything’s fucked.

I calmly state, “No. No lo se. Y entendí.” If anything, the two attendants will see me as the epitome of fucking grace in the face of over 8,000 kilometers of uncertainty. I figure if I have a whole day lifetime of issues in front of me, I might as well start out faking I can handle it and save some face. But are you fucking serious. Twenty minutes later, she’s rerouted me through Portland.

I don’t remember when the tears began, but I have found the distance between Barcelona and Amsterdam to be a good length for a full-out, stifled sob and subsequent exhausted sleep. A small boy sat in front of me and occasionally peered around between his seat and the window. I tried smiling but he’s probably scarred for life and scared of women now and probably asked his parents a lot of questions about snot and tears. To the couple seated to my left: thank you for pretending it wasn’t happening. Thank you for placing a cookie on my tray when I finally fell asleep. Thank you for as casually as possible prodding me awake as we landed.

In Amsterdam, I speak Spanalan; the English doesn’t emerge until I’m told I’m actually on standby and panic.

The rest of that memory is a metallic feeling, but I’d like to place an official shout out to whoever it was that got lost in the Schiphol airport the morning of Sunday, November 2, 2014. I got your seat. Thank you for getting lost. We’ll count the flight I got bumped from in July as karmic exchange. I hope it was you who got to board instead.

Crossing over the North Pole, I watched Snowpiercer; an inspired or questionable selection considering my proximity to nothing but freezing snow and ice and hundreds of miserable strangers. Snowpiercer is, of course, a post-apocalyptic film set in a train hurtling along an endless loop of ice, snow, and hopelessness. I suspect their cubed bug food looks exactly like cheap jellied cranberry sauce, which is confirmed at Thanksgiving a few weeks later. The airplane food’s plasticity reminds me of K and H’s cooking, the piercing dinner bell, and feasting on day-old quiche with S and “Uncle” D at the Refugi d’Agulles with a fat cat purring by the tree line.

Probably while I was oversharing with Starbucks employees in a Portland Airport terminal, S wrote me a letter from a bench in El Bruc. I received it in January, postmarked Jerusalem.

“Mama Montserrat is so strong today. After your David Bowie dog car ride I sat by the fire with K, H, and AC. H “There are 4 kinds of power – the power of women, of men, of $, and power.” K argued towards a definition of the last one and they agreed that it meant “Will.”

Eight months later, I revisited the house for 37 hours. The floor tiles still lose, the one shower head still with a startling mind of its own, the high drone of insects the same. The same couch, now without its pillows. A different side of the restaurant, with a bench of old friends and a bench of new. One less cat, new cats, whitewashed walls, new paintings, a working dryer. The benches in town nostalgically reeking of past postcard writing sessions, and the small patisseries innocently orchestrating meet-cutes and meet-awkwards.

My sister was with me and spoke of ghosts in the halls and waking up in our pink-walled room feeling ineffably held in the timeless, still air of the morning.

Along with old familiarity arrives the new understanding that closure is perhaps not what one seeks or perceives it to be.

The closure was in the sharing.

Megan Broughton is an artist, arts educator, writer, and cellist. Her writing has been featured in Entropy Magazine and Enclave. You can view her artwork here: http://cargocollective.com/meganbroughton.