Bullying The Truth Out of Scott McClanahan

Scott McClanahan did a reading recently in Columbus. He was going around and telling everyone, including the Paris Review, that it was his last reading ever. But I don’t think anyone believed him. I know I didn’t.

Then I received this e-mail from him, which suggested that his hyperbolic statement might be something more than the half-assed publicity stunt it appeared to be.

Juliet Escoria: So you’re done with readings completely? Is this like how you’re “never coming back to New York”?

Scott McClanahan: Yes, I am done with readings. No, I don’t think it’s like my “never coming back to New York.”

JE: So you’re never doing a reading ever again? Are you serious? Isn’t that stupid in terms of publicity? And aren’t you concerned about disappointing your fans?

SM: Yes, never doing a reading again. Done. It’s very stupid in terms of publicity. But no one has ever accused me of being smart.

I don’t think four people getting disappointed is anything to be concerned about. 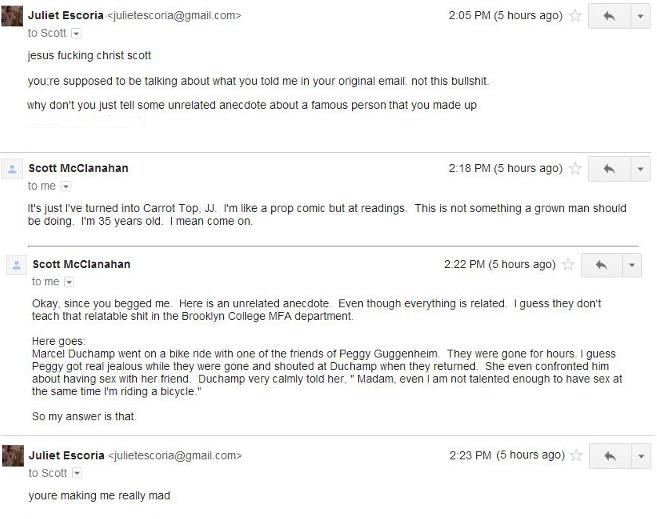 SM: I almost want to say I’m quitting readings because it’s funny. It would be like writing an anti-glacier novel. The glacier happens and there’s nothing you can do about it. So why care?

So, my answer was just cut off by you (Juliet Escoria) saying that I was screwing up the interview and that I (and I quote) “just need to say what the hell I [Juliet Escoria] want you [Scott McClanahan] to say.” I really don’t think there’s much journalistic integrity in that statement.

JE: But was this your plan – to go into debt from traveling?

SM: Yes, this was the plan. John Cassavetes always said that the greatest thing in American life was credit. And the deeper in debt you were – then the more successful you appeared. It’s how Orson Welles made films, it’s how the Catholic Church built their great cathedrals. But I took a risk and it probably seems stupid to most people. And maybe it is.

At least I have money coming from a deal that I can’t talk about right now, that will save me from the pits of bankruptcy for another year or two. It’s a deal that my agent says is stupid, but in the words of Welles, “The worst advice you can receive is agent advice.”

So Chris and I are going to do music and tour, and we’re going to make movies with Two Dollar Radio, and I’m going to keep writing books for Gian, and hopefully it’ll make sense one day. Doesn’t seem like too many folks are risking anything though. They are just worried about fellowships and colonies and writing stories about alligators and baseball and putting out books with bad Oprah book club covers.

I say let the whole shit house go up in flames and let’s see what happens.  And if I’m ruined – then let the ruin come.

I’m so sick of this whole minor league/big league thing that indie lit has been going on about for years. It’s so damn boring. Can you name another writer as good as Sam Pink? Chelsea Martin? You? I don’t think so. 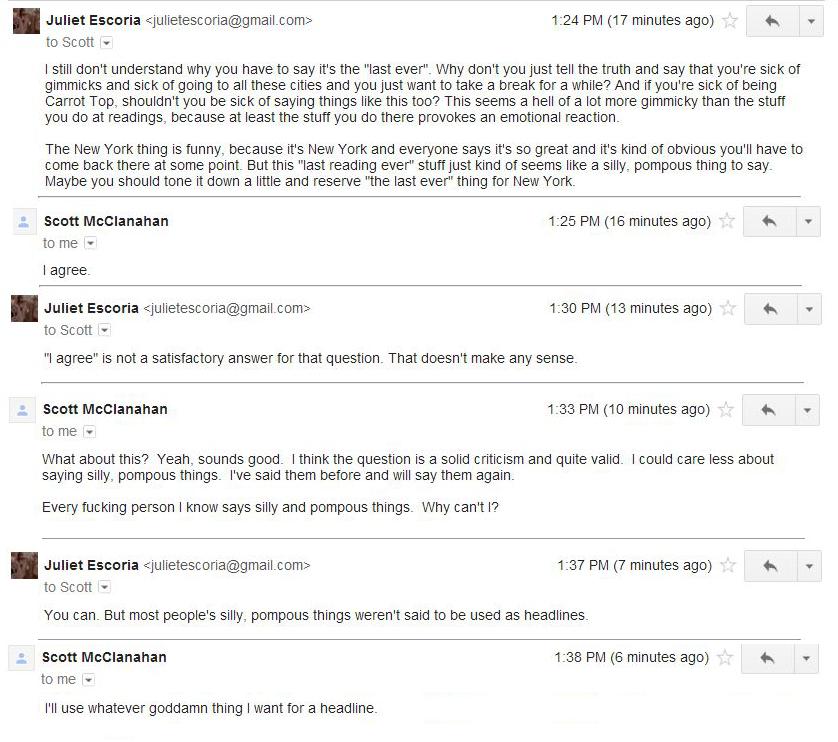 I still think the “Last Reading” thing is funny though because it’s such a small community and nobody cares. It’s like when I made you my official book signer in Charlotte. People would buy a book and ask me to sign it and then I would pass it to you and explain that I’d hired you as my official book signer. People got mad when they saw you signing my name, but it was funny to us. But maybe it’s not a joke though if only two people feel it’s funny.

So I’m sure I’ll read again (just not this stupid performance shit) but I think I’m just burned the fuck out, and it’s hard to do them now. I’m broke and I’ve been trying to quit drinking and these readings are nearly impossible.

In 2009 I told myself that I was going to bet on something, and that was Me. I was going to go all over like Dylan Thomas, and Vachel Lindsay and I was just going to read and I was going to turn my back on trying to submit things to places I liked or trying to get a fancy agent or getting into a fancy writing program. I shouldn’t be talking about this but Sarah was furious with me going into debt over such a small and silly thing. Gary Mack would kill me if he knew. He really would.

I’m just tired. The first reading I ever did was in Pittsburgh, PA. I was so nervous and I got a hotel that was 2.5 miles from the reading. I had to walk two and a half miles to get to the reading and I ended up getting there a half hour early because I wanted to give myself enough time. It was dark when I got there and so I went into this graveyard next to the reading and I sat down on the steps of this family tomb and I drank a 24. It felt so lonely there but nice too – like all of these people who died in the ‘20s and ‘30s and who no one even visited anymore. It was dark and then it started snowing. I asked Ruby and Nathan to be with me, I was so nervous. But it was exciting and that night I could see it. I could see that I could do it.

So I just want to get back to that. Do you know how exciting it is to meet Adam Robinson and have him say nice things to you and to feel that he likes you? I was sort of obsessed with these people and then to actually get to know them was wonderful. And then I had to walk back to my hotel. But that walk was one of the happiest walks I’ve ever had in my life. When I got back my feet were bleeding from the blisters because I had walked six miles. I didn’t know Google Maps would show the distance from the hotel to the location you were going. I was just so stupid and naïve.

Or when I went to Chicago in 2009 and read with Sam Pink and Ben Tanzer for like 4 people in this bookstore? I remember feeling like it was the best thing ever.  That reading. Reading for four people. A woman bought one of Sam’s books and I’ll never forget Sam’s face. He was so humble. It was like he was a little boy almost. Sam repeated two or three times what the woman said to him: “She said, ‘My son likes to read and I know he’ll like this book.’” It was almost like he couldn’t believe somebody would like it. The next morning I started crying as I drove out of Chicago. I don’t know why, but I felt like maybe I’m not such a freak. Maybe I’m not such a freak if I can drive to Chicago and have four people show up.