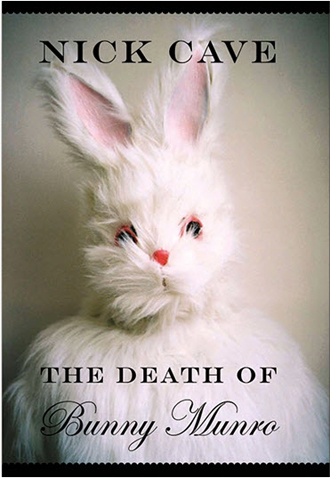 Bunny Munroe, a serious cocksman of the real incorrigible sort, is set on a tail spin with reality and fate after the suicide of his wife, who killed herself while Bunny was banging a hooker. His come-uppance arrives in many forms, malefic forces dart in the shadows throughout, and dues must be paid for the sort of infidelity and anti-social pathological behavior Bunny engages in; his obsession with underage and famous pussy (in particular Avril Lavigne and Kylie Minogue), his without-qualms decision making to literally rape and pillage, and his own ignorance of the son he travels door to door with selling beauty products to lonely housewives in the south of England. Bunny Jr. is barely on the cusp of existence, despite his son’s glorified perception of his dad. Bunny’s fate is sealed from the cover of the book for certain, but Nick Cave barely allows him any redemption before descending into complete madness. To his credit, Bunny is unapologetically obsessed with pussy. “Then they looked at Bunny, who pretended to give it some thought, but didn’t really need to. ‘Vagina man,’ said Bunny, and his two colleagues went silent and nodded in silent agreement.” Before the Devil takes him, Bunny, who often picks up women by stating his name and waggling to fingers  behind his head simulating rabbit ears, has one last ditch, manic effort to relate to his son, whose ghost of a mother is probably the only thing keeping Bunny Jr. from drowning with his old man.—mkl