Book: LIFE AS WE SHOW IT: edited by Brian Pera and Masha Tupitsyn 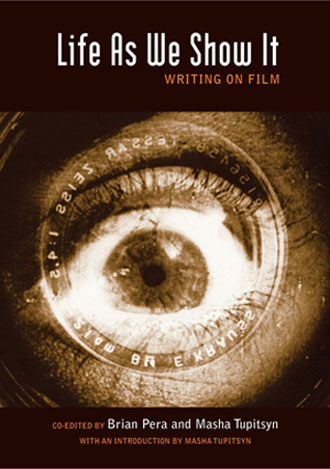 Lots of people write about film. In fact, one of the easiest things to do might be to write about some movie you just watched, your critique, your interpretation, your blog. So what makes this book special, aside from the fact that several of our lovely contributors wrote for it? Well, this isn’t just a book on film and feelings, it’s actually kind of haunting in strange and lingering ways, like a silent, but heavy presence in the room. Kevin Killian’s “Young Goodman Brown Effect” is quintessential Killian, tracing a midnight walk with the devil with his own journey into dark corners of the Internet, while Donal Mosher ponders the crucifix scene in The Exorcist while keeping a diary as he films a documentary about his family. Myriam Gurba recounts horrific parallels as she traces, chronologically, her way through Larry Clark’s Kids. It’s all very surreal, and equally disconcerting and concrete. The pieces move like scenes and vignettes themselves, flickering and shimmering in the dark, shining in and out until one can almost hear the lead frames of the film monotonically whipping against the takeup reel in an otherwise silent room.

Life As We Show It is available from City Lights.