Body Map: What Do Fish Hear? 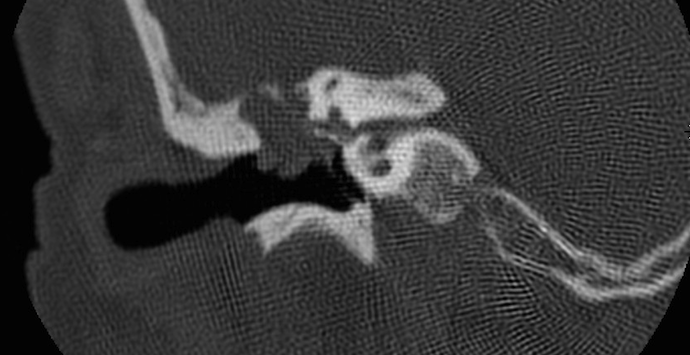 Not hello. No creepy heavy breathing. No muffled shuffling of the receiver cradled in the crook of the caller’s shoulder. First, what you understand is that you hear nothing when you answer the telephone. It’s 1985, and you can barely hear the Too $hort you’ve just gotten into. You can’t hear the screaming F-14s on your VHS copy of Top Gun your aunt and uncle gave to you for your birthday and which you watch with the television’s volume pumped up all the way.

Stirrup, anvil, hammer. Stapes, incus, malleus. The ossicles: bones of the middle ear. Eaten to mush by cystic growth. This you learn much later, after your first visit to the ENT.

The feeling you get is that the left side of your head has been filled with peanut butter. There is a bunch of shit all up in your ear. You’ve got to get it out. What else to do but shove in a bunch of q-tips and wiggle them around to get the shit out. But this only compacts whatever’s in there more. When shoving the q-tips in you can hear it, though it’s muffled, like it would be if you had peanut butter shoved inside your ear.

You pull the q-tip out of your ear and there’s a lump of cheese on the end of it. How the fuck did you get cheese in your ears? You smell the cheese and it doesn’t smell like cheese; it smells like a dead dog’s asshole. You’ve never smelled a dead dog’s asshole before, but that’s what you think it might smell like. There’s some brownish goo around the cheese. What to do now? Take the q-tip to your mother, that’s what.

Your pediatrician shoves the otoscope into your ear canal. It does not itch the itch like the q-tip had. It’s a sharp searing into the side of your head, into your brain. His name is Dr. Pen. It’s like he’s shoving a pen into your brain. Dr. Pen has a moustache that looks like the bristles on the brooms the janitors at school use to sweep up the hallways. You notice these janitors and their brooms because you spend most of your time at recess and lunch alone, leaning against a pillar, watching the other children play and talk with one another, and watching the janitors, likewise in their solitary task of cleaning, and they watch you in your solitary watching, and you think that there’s a kinship in this, this mutual solitude. Dr. Pen says, “Infection.” Prescribes amoxicillin.

You have changed schools, hence the loneliness. Your classmates have been here at your new school since kindergarten. Your friends, those you’ve had since kindergarten, continue at your old school, so you presume. Some of the kids at your new school call you fat ass and white boy and nerd. Now that you cannot hear them it is easier to be alone at recess and lunch. A week passes and still you cannot hear and still you pull brown-goo-covered white cheese from your left ear.

It is at this point that Dr. Pen makes the referral for Dr. McAfee, whose office sits one block up the hill. The waiting room at Dr. McAfee’s contains fish tanks, just like Dr. Pen’s. Later you will realize that every doctors’ office waiting room you’ve ever waited in has fish tanks. You think doctors really like fish, that or the tanks and presence thereof must have some soothing psychological effect on people like you, who love doctors for what they do but hate what they must do—the probing and cutting and removal that causes pain and nausea.

After this first visit with Dr. McAfee, after he shoves his otoscope into your ear canal, after sticking the end of long thin vacuuming tube into your ear, from which he sucks out all the cheese, and—if momentarily—you hear again: the sucking of the vacuum inside your ear, a whirring. The thud of the remaining cheese sucked up by the tube. Dr. McAfee removes the vacuum and pulls off the cheese with surgical gauze. It’s a cholesteatoma, Dr. McAfee tells your mother. We’ll have to schedule surgery.

You’re lying on your back in the examination chair, the tube through which Dr. McAfee looks into your ear still inserted in your ear canal. The walls of the room are painted tan, like the ceiling. There’s little light, other than the very bright light of the doctor’s otoscope. You know so little in your nine years, but you know what surgery means: they cut you open.

The hospital’s nestled in a pine forest atop a mountain that overlooks the Monterey Bay and Monterey Peninsula. Inside the hospital, instead of a fish tank there’s a coy pond. Giant fucking goldfish. This should scream peace. What you feel is your stomach: a pit that’s knotted into itself. You feel like you could vomit but there’s nothing to vomit.

You strip naked and slip into a hospital gown. A nurse brings the implements for your IV. She vigorously wipes down the backside of your palm where she will insert the needled drip thingy. The rough alcohol-soaked pad scratches your skin, leaving it red-raw. Then the nurse tells you to look away but you don’t. It is a searing, burning pain when she inserts the needle into your vein. You grimace and grit teeth, your right hand a fist.

A pair of orderlies prep you for surgery. They carry clippers and shaving cream and a razor. Time for a haircut, one of them says. They recline the gurney you’ve been sitting up upon. First the guy with the clippers clips your hair away on the left side of your head. You’d paid attention when Dr. Afee explained the surgical procedure. What he’s going to do is cut your head open from behind your left ear, then peel your skin back with a retractor to expose your ear canal and the bones of your skull surrounding it. From there he can cut open your skull to expose the attic of the middle ear and extract the cholesteatoma. Easy, he said. So, you’re getting this “haircut.” When the clipper guy’s finished, the razor dude steps in.

When you reach the operating room it’s flooded with bright white light reflecting off an abundance of stainless steel. The anesthesiologist appears at your side and says you’ll soon feel sleepy. Then the shaved portion of your head is being swabbed, not unlike the back of your palm, where the IV was inserted. Then the anesthesiologist looks over you and you can see his eyes smiling though you cannot see his mouth through his surgical mask. He says, Breathe normally, and he drops the mask over your face. It tastes like cherries, or something fruity.

You wake in recovery. Your gurney has been walled off by a curtain and your parents stand there, your mother wringing her hands. Your dad asks how you’re feeling. You’re not sure, other than your spinning head that’s dull with pain. You want to sit up? You do. The nausea hits you. Before you say anything you’ve puked all over your bedsheets and hospital gown. This goes on for the next six hours. You don’t know how it’s possible to puke so much; you haven’t eaten in almost twenty-four hours. And it is nothing but liquid: yellow bile. But you can’t stop. It smells vaguely medicinal, like you’re throwing up the drugs the anesthesiologist used to put you under. The nurses suggest that your out-patient surgery might become in-patient, if you cannot stop vomiting and recover enough to leave the hospital. And this could tell you something about the power of the unconscious: it’s not long after this news that the nausea abates. You stop vomiting. You’re able to get out of bed, able to walk the halls of the recovery ward, trailing your IV on a rolling rack as you go, the walls lined with curtained “rooms” like your own, the curtains a pale yellowish-brown. You wonder, do these colors induce peace and calm? They remind you of your vomit.

Your head’s bandaged, your ear padded with gauze. You look like a Civil War veteran, your mom says, knowing how much you love the Civil War. You’re home from school for the rest of the week. But you do return, before the bandage has been removed. You don’t want to go to school with this bandage bandaging your head, but your father insists. He always insists on going to school. Later, you’ll wonder whether this policy was good or damaging.

You’ll wonder the same things about the surgery itself because it will not be your last. In fact you’ll have seven more surgeries like this one because the cholesteatoma will return, and you’ll undergo this same routine every time. You’ll see the specialist at Stanford University. Then the reconstructive operations, refitting the bones of your middle ear with artificial replacements. And every time: the fear, the nausea and vomiting. One time, under a local anesthetic, the doctors started sawing open your skull and you squirmed under sharp pain and the doctor asked, You can feel that? And with your head strapped down, with what little movement you could muster, you nodded, and they shot you up with more drugs.

Today, your wife wonders what your problem is, why you never want to go to the doctor, why you haven’t seen a dentist in years. You know that isn’t good. But you let your fear guide—no, overtake—you. You know you should accept the peace of fishtanks, of aqua blue and tan-painted rooms. And maybe you will, but probably not. Then ask your wife to read this. See what she thinks. Welcome her to your lifetime living nightmare. It’s not so bad, perhaps. At least today you can almost, if you’re really focusing on it, hear.