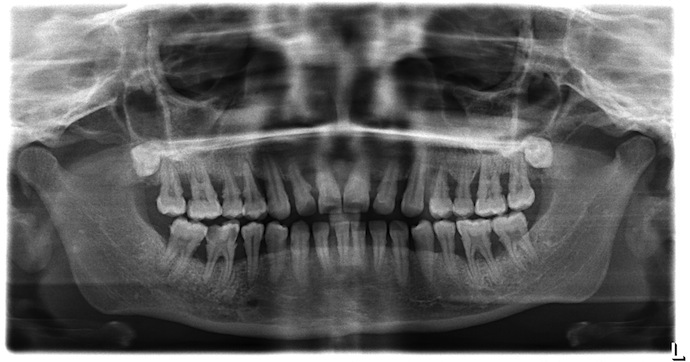 Feet up, head down, bright light in my face, telling my dentist to fuck off and die. I don’t cry – ever – but here I am weeping, in the Victorian sense of the word. Producing gallons of sorrow, rivers and lakes of sad. The pain isn’t even bad, not yet, because they’ve numbed me so thoroughly, but it’s like my tear ducts know exactly what’s to come. The pain, the balloon face, the strange forms disfiguration takes – and later still, the dent, the divot in the sweep of my cheek, the place where infection ate the fat away for good.

The dentist has been impatient, my mouth has been a challenge, he has plans, he wants to get the hell out of here. He keeps joking about how many martinis he had at lunch.

I’ve never met a really kind dentist. I’m sure they exist. But every dentist treats me like shit, makes my phobia worse, blames me for the genetic disarray in my mouth. They shake their heads and ask me if I brush my teeth, if I’m doing it right, demonstrate flossing, make clucking sounds when discussing my tooth decay and problematic gums. My mouth is a war zone. It’s a cave of shame. I smile with my mouth closed, and put my hand up when I laugh.

It’s not the pain that makes me phobic. I have a high tolerance for pain, for having my mouth stretched to hell, for being scraped and prodded and poked and drilled and yanked at and punched inside.

For braces, headgear, fillings, crowns, root canals, tooth guards. For impacted wisdom teeth and finding out I was allergic to codeine after I passed out on the bathroom floor. For grey, crooked teeth tucked in the back of my mouth like a terrible secret.

My point: it’s not the pain. It’s the shame. Like you’re not taking care of your body on purpose to spite yourself. Like look at you, you ignorant trash. Do you want all your teeth to fall out?

Do you want to be a bloody gumhole, sunken-cheeked and sad? Do you want to mouth around your oatmeal, your pudding, your applesauce, like an aged, nightmare baby? There’s always money for dental care, they say, and the raw shame rises like a balloon in my throat. When you’re poor, you resign yourself to toothless-ness. It sounds funny, but it isn’t, not in the 21st century. And now that I’m not poor, not anymore, the damage is still done. The shame is always there, sitting on my tongue, shouting out the past like a dirty secret. Of course I’m really lucky – I have terrific insurance now, you see. And so the war zone is active, bustling. Trying to make up for lost time.

My mouth is scorched earth.

For the entire month of November, I had face-Jello-ing pain until they finally pulped my tooth nerve – my fourth root canal so far. And as bad as that sounds, I love a good root canal; the sudden easing, the blank white absence of pain has got to be the closest thing to morphine I can think of.

And now the drill has slipped, there’s a jagged hole in my cheek, the dentist’s assistant is hurriedly sewing it up before the painkillers wear off. They do not give me antibiotics. They say over and over that I moved, that it’s my fault, that these things happen, something about best intentions. They are obviously terrified I will sue them. You’ve ruined Christmas, I say, stumbling and weeping out the door, already making fun of myself for such lame theatrics.

The worst I imagine, really, is that I might not get to eat turkey and stuffing, that I might have residual pain. I have no idea what lies ahead.

Apparently it’s common, in cases of trauma to the cheek, for the swelling to spread downward, spilling into the neck like a lumpy sack of lard. I watch my own face disappear. I watch this unfamiliar face grow and sag and swell, bigger every day.  First it looks like chew in the cheek. Then a golf ball. Then a baseball. Then a grapefruit.

Still I am not given antibiotics. I am desperate. I cannot sleep at night – on my back I am choking, on my non-swollen side, the weight of the swollen side presses heavy and painful. I reluctantly accept Percocet, for sleeping only. Painkillers make me nauseous and dizzy – I hate that woozy, blurry feeling.

I go to work and try to hide my face in turtlenecks and behind my hair. People gasp and make sympathetic sounds of horror when I show them. It’s kind of funny, or it would be if I wasn’t swimming in self-pity.

Your poor face, says a co-worker, in a tone that implies it will never recover. I think about buying a ski mask. I think about the movie Mask. I wear my beanie pulled down over half my face, like Dumb Donald from Fat Albert. Thank god it’s winter.

The pain is so immense, by now, that I’ve stopped caring. I can’t go to the office holiday party. I can’t open my mouth wide enough to eat solid food. I can’t read, or watch TV. I can’t go out in public. All I can do is take Ibuprofen. I live for the time I can take Ibuprofen. Every four hours.

Sometimes I cheat and take more, take it early. Sometimes the pain is so bad that I hope my stomach does bleed, just to distract me.

A bad pain in your face is the ultimate tunnel vision. It’s amazing how it swallows the sun, how it becomes the only thing you can see, hear, smell. How it eats away at the outside world. I can see how someone would suicide over pain. It becomes a massive monster, smothering your senses, until all you require is that it be gone. You almost don’t care how.

And sometimes there isn’t even an almost.

I can see how people with long-term pain would do anything.

Then my cheek explodes. Pus fills my mouth and makes me gag. It smells like soup. I keep having to run to the restroom, to spit foul liquid into the sink. I call again, and this time, the oral surgeon sees me. They’re beyond alarmed. This is a serious infection, the surgeon says. A little further and it could have gone to the brain. It feels like it already has.

They finally give me antibiotics. And as my cheek deflates, as the gross gunk leaks out, my life comes seeping back. I’m ready. I’m drinking it in. I’m constantly smiling, saying dumbass shit like ‘life is good,’ because it suddenly doesn’t hurt to live. I can watch comedies again. I watch Spring Breakers and that shit seems cosmic and profound. I can eat, real food, though it will take many months before I will be able to open my mouth wide enough to get three fingers in there, stacked horizontally, which is apparently the gold standard of mouth-opening-width. (The things you learn in a medical crisis.)

Now, four months later. I type “four mouths” at first, which seems righter, somehow. I have had so many faces, so many mouths. All the skin peeled off my cheek in a shiny sheet. The grapefruit went down to a baseball, down to chaw, down to a little lump of skin, of scar tissue that will, I suppose, be there forever. Down to a new face, a weird divot in my cheek, a sunken place where all the fat is gone. Now I don’t know what kind of face to make in pictures. I keep turning my face to the side of the camera. I don’t know how it looks when I’m talking. I don’t recognize my profile. This new face, the latest in a series, takes getting used to. I grow my hair long and part it deep on the side. I marvel at the body’s ability to heal itself, and at the body’s ability to distort itself. I marvel at the fact that no one seems to notice this new face but me. I marvel at the way we forget what it is to live with pain, that even now this story is not about pain, not really, though for a while pain was all there was. I tell myself this is a good opportunity to be less vain, to learn to live with change, with aging, with the inevitable decline and breakdown of my mortal coils.

And yet here I am, staring at myself in this mirror again. Trying to memorize this new face.