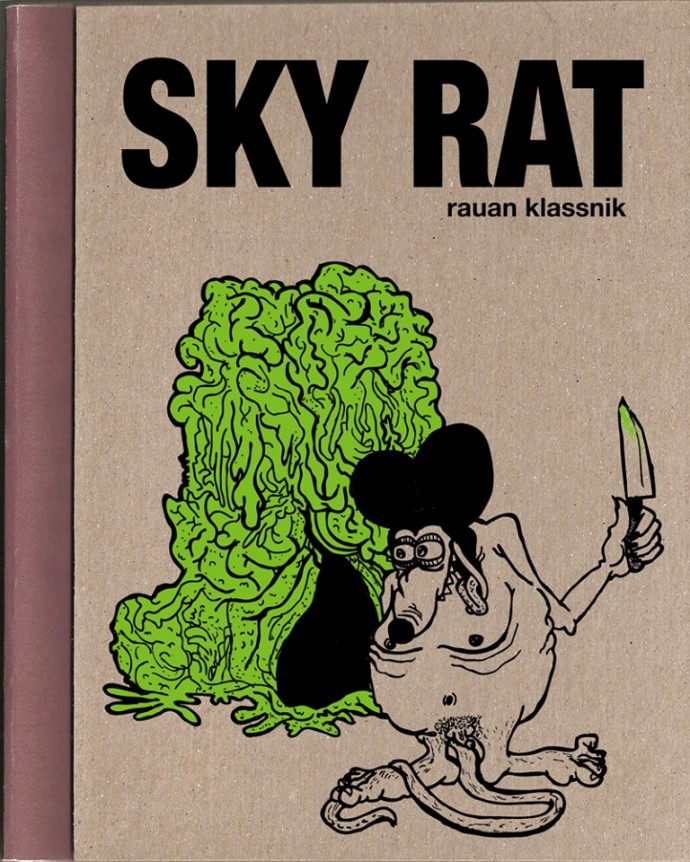 Rauan Klassnik is one of my favorite writers and he is a gentleman to boot. The first time we spoke I asked if he would send me a doodled copy of Moon’s Jaw, which he said he was delighted to do. In the copy he sent me, among doodles of what resembled human figures hanging by nooses below the ocean, a ship and a group of foreboding trees drawn in bright chalk pastels or some such thing, he thanked me for my interest in his work.

Beginning with his book Holy Land (Black Ocean 2008) Rauan has been a familiar voice in contemporary poetry in America and abroad—a voice at times screaming, at other times taunting—playing with style and narrative in a way that makes his readers reconsider the function of poetry. At times, Rauan can border on the grotesque, but always with an end result going well beyond mere shock value. Sky Rat (Spork Press 2014), his most recent work, is surprising not only for its form and content, but an underlying conversation I think he is having with the larger poetic community about poetry’s chosen gatekeepers: the “M en . Bearded . L ounging A round . / On Th eir M otorcycles . / G uarding The A ncient St atues … Pr otec ting S c red T r ash.”

In Sky Rat, Rauan experiments—leaving out words, crossing things out, adding and subtracting, and all of this informs the reaction of the reader. The poems in the chapbook are accompanied by the artwork of Spork Designer and Editor Andrew Shuta, which makes it all the more visually appealing (naked rats, fat men, etc…). This interview unfolded over several weeks via email while Rauan was traveling and giving some readings.

FANZINE: What inspired you to write your newest chapbook, Sky Rat?

RAUAN KLASSNIK: Sky Rat is my YOLO book. Seriously. I wrote and revised and organized much of this book in a real state of glee. Violent, youthful glee. That being said I think it contains some of my most mature and complicated enactments of tender, love poetry.

I think, also, that it’s an incisive foray into the intriguing field of Metamodernism, the giants of which I’ve always kind of admired from afar—like watching foresters bending over as they hack away at the trees, cracks all nicely exposed.

FZ: The main character in Sky Rat, Sex Ableton, is he supposed to represent some type of prophetic personality (tongue in cheek)? Is he meant to save us all? What type of list would he be?

RK: I’ve always been fascinated by religious personalities. So, sure, very much a prophet. And, sure, also, very much a savior. And a savior and a prophet, strangely and/or funnily enough, with a very small penis. A House-Mouse’s, as the book puts it. 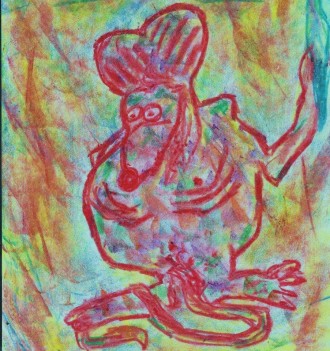 RK: I’m not very good in the kitchen (boiling an egg or two is about my limit, really) but now and then my wife, Edith (kind and beautiful, exotic) asks me to stir something (steel cut oats, for example) and I’m almost always happy to oblige.

But that being said I can be a troublemaker. Can be naughty. And can be an asshole. Blah. Blah. Blah…..And, ok, that’s the last of the Blahs in this interview. I’m getting super-serious now.

FZ: Okay, that’s good to know. And, so, if Steven Roggenbuck and I were sitting at a lunch table and asked you to join would you: a) politely decline b) join us but only stay for a minute c) scoff and walk away or d) other: (please describe alternative scenario)

RK: Seth Abramson—the well known critic, anthologist, poet and cultural commentator—and I are on good terms and when I met him for the first time (in Madison, WI, the day after Halloween) we had friendly intercourse in which I sat down at his booth and chatted with him, his girlfriend and friend Jesse. So, absolutely, I’d sit down and break bread and shoot the shit and chat, whatever, with you and Steve.

(Is printing Jereme Dean’s strong opinions about Alt Lit, & Steve in particular, reason to think I’d be rude to Steve in person ??. . .and, for the record, my thoughts on Steve and what he’s doing in writing, as well as on line, are quite ambivalent).

FZ: In Celine’s Death on the Installment Plan, he describes each death as a “little hiccup.” It seems that in Holy Land and, in a lesser sense, The Moon’s Jaw, you blow up the moments of these little hiccups, expanding them to find what exists in between. Could you speak to this and how it informs your writing?

RK: I write so much in the shadow of death (because it’s always been such an obsession for me, since I was a little boy), yadda, yadda, that it’s a kind of spotlight for me, lighting up life. Kind of also an orange I can squeeze. A peach I can suck.

And you’re right, I think, that the voice and poems in Holy Land tend, generally, to be more patient, expansive and elongated than their counterparts in The Moon’s Jaw.

FZ: And, of course, Rauan, I assumed you’d be nothing but cordial to anyone asking you to join them for lunch. I find it interesting that you used the word “ambivalent” to describe your sentiments toward Roggenbuck’s work. Is this the way you feel about the Alt Lit culture club in general?

FZ: Your work, in my opinion, engages in a dialogue with itself about what “poetry” is and what it should be…Who are the people tasked with this decision today? Why types of terrible people are tasked with being the gatekeepers of poetry…to keep it pure? Is it possibly time for some new ones, or to destroy the gate all together?

RK: Sometimes, often, I just hate the word “poetry” and would prefer my work be labeled something like “language chunks.” But then again most of what I write is clearly “poetry.” (sigh. Godamnit, sigh.)

The problem is that “poetry” like “dog” connotes a wide variety of possibilities. I mean a Great Dane is quite different from a yapping little Pomeranian. But it’s worse when you consider what monsters and vapidities supposedly co-exist within the pale of “poetry.” Seth Abramson often, I think, believes that as “poets” we’re all in it together. But I’m probably more with Ron Silliman where I think it’s okay to be critical from time to time. Okay to pick sides.

There are good, exciting things happening in the “poetry” or “writing” or “language chunk” world! But, yeah, for sure there are bad gatekeepers everywhere. In Academia, in Indie Lit publishing as well as Alt Lit publishing, etc. And for sure I take my hat off to people saying Fuck it and just making a new scene, a new thing happen, rather than relying on old corrupt bitches gone in the teeth.

FZ: Have you ever been in the military?

RK: Some of the poems in Holy Land are written from the perspective of a soldier (or a group of soldiers) and I’ve always enjoyed war movies and reading about soldiers and war (“All Quiet on the Western Front” is a book I’ve read many times) but I have no military experience unless you count stalking through the fields of The Orange Free State to find and shoot birds with my brother when I was 8 or 9 years old. Or my current MMA training.

My dad on the other hand had to do obligatory military service in the South African service where he ended up getting all sorts of “perks” because he played on the Army’s rugby team. He was also a drill sergeant and, I believe, supplied alcohol to recruits.

FZ: What does poetry as a practice rather than poetry as literature mean to you? Is it a farce?

RK: Are you talking about Poetry Academies and titles like “Chancellors” ?? I mean what the hell’s that all about?? But then again I’ve heard a young Rilke used to walk around Paris in a swirling cape with a rose between his teeth.

And with the word “Chancellor” in the theatre, now, of a “Poetry Academy” then I think we certainly have devolved into total farce—where everyone wears big shiny hats. And this seems so much less interesting than the imagination.

Which would you rather have: a horse or a big shiny hat?

FZ: Your book The Moon’s Jaw deals with a violent, disorienting blurring of gender at times…how much did this inform the writing of the book?

RK: Well I think it’s definitely an important aspect of the book most realized in Section II (“A Man & A Woman”) and I think it speaks to the overall, strange mix of the sometimes pleasurable (and even healing) nature of a book that is basically just a wasteland.

FZ: You seem very well acclimated to keeping to the length of the page while creating your explosions. Is form something that plays a large consideration to you while you’re writing?

RK: A mentor (how bitter-sweet to use the word) once told me I was a “lyric sprinter” and that my poems like to “hit the ground running.” Fair enough.

And you’re right on about “explosions” and that’s where I try to rein myself in. Or my work might be come like a tomato sauce. Or something like that. Yadda. Yadda.

When I’m putting together a book I am concerned with how it’s all going to look. Lay out. Actually concerned isn’t the write word. Obsessed is better.

FZ: What books are you reading right now?

RK: I don’t read too much but I am finishing up a book called Keys to the Garden: New Israeli Writing which Joe Hall recommended to me a year ago. And much of it is really quite great. I’ve also just finished and thrilled to Nate Liederbach’s Negative Spaces.

RK: Anything. Everything. Like all of space and time, I mean.