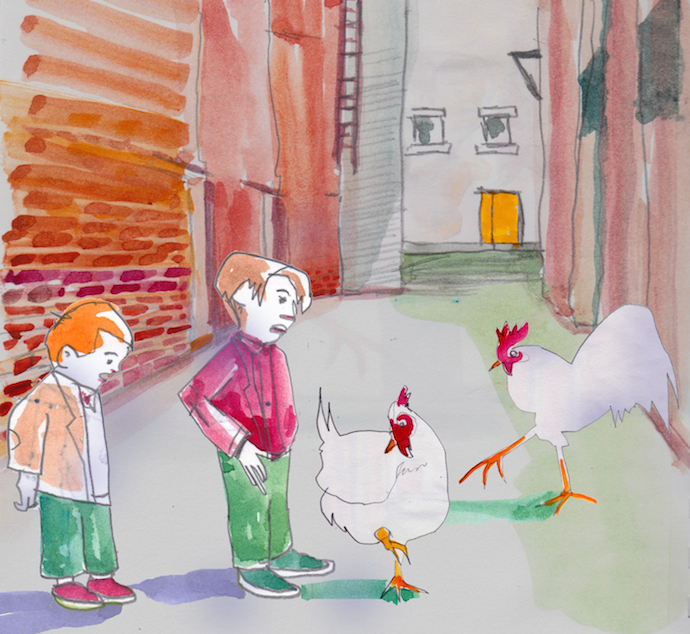 On the day of her birth, she opened her mouth and instead of a cry or a gurgle or a precocious giggle, she spoke her name. It was the first mystery of her life, this self-naming, in September of 1884. Her father would not have liked the name she gave herself, but her father was not there; he’d left Chicago for Montana to pound the line through. Her mother was alone with two sons, alone to give birth with the help of female neighbors in the back bedroom of the squat brick house, in a neighborhood of dark and crowded bunched-up two-flats on the south side of the city.

The mother, on her own, intended to give the child one of the names agreed on by her absent common-law husband. A boy was to be Arthur, after the mother’s father, having already passed on the father’s family names to two sons. For a girl, the mother favored Fanny, the name of her own mother, but the father wished for the more modern sounding Dorothy, hoping someday to call her Dotty, a name that bespoke the promise of the next century, with its ticks and tacks, its coded electric signals. Dots and dashes and lines drove through.

The labor was hard. The mother thought that births got easier as you had more, and her second boy had taken less bell and bargain time than the first. But the girl was slow in coming. In the close air of the big room on the ground floor, curtains closed, stove lit for water, the mother sweat and bled and shat. Her water broke in the parlor, soaking her dress, her underthings, and the rough carpet with fluid, sweet and salty smelling. Holding her belly to relieve the pressure between her legs and on her unnamable inner parts, she walked to the front door and called out to the first person she saw, a five-year-old girl named Annie, to get the women who dealt with these things, and say that the baby was on its way.

When the girl was born, late and fat, when her chubby shoulders were through by pushing and the rest of her was pulled swiftly out and the cord cut and the afterbirth burnt in the fire and the sheets pulled off and with the newly stained chenille cover put in a tub out back to be washed, without asking, by the neighbors, and new sheets and blanket put on the still damp bed and the little girl wrapped up in a soft cloth diaper and the little crochet hat that the mother had made located and placed on her bald head, the baby took to tit and drank. The feeding was easier with the third child than the first two because her nipples had swollen and elongated and the thick liquid of her first milk passed easily through the mother’s skin.

After the birth and her first meal, in the calm of the dawn of her first day, with her little head still funny shaped from coming out and laying on her mama’s bosom, the baby said her name, clear and ringing as the word itself.

The neighbor women had left to their own homes and the boys were off with an old woman who gave them candy and put a poultice on Abe’s face, and so the mother was the only one who heard. Alone, the mother considered what her infant had just done, her breath lifting the child on her chest, one hand under the baby’s bottom and one laid gently on her neck.

She considered and simply, softly, and without question said “Bell.”

“Bell,” said Bell, the tip of her new tongue flicking the dental “L” off of her toothless gums.

“Yes,” said her mother, but she wondered.

The bells of the new day sounded, and the mother held Bell to her and the newness of the baby girl, flesh loose on small, soft bones, put a sweet pressure on her heart.

Bell’s brothers, seven and five, heard from the neighborhood children that their mother was to finally have the baby and knew this gave them leave to be out as long as they wanted so they went to look at the alley chickens and to beg sweets off old women who lived by themselves.

Abe and Paul, in their plus-fours, their pedal pushers, in what their maternal grandmother would have called “breeches” and their paternal grandmother “britches,” in their machine-knit socks and machine-woven canvas jackets, in their hand-knit sweaters, squatted down in an alley and, with hands on knees like inspectors looking at pressure gauges, inspected chickens. When Abe, the younger one, went after a baby chick, the mother hen jumped at him and scratched his face. Paul pulled the chicken off and in his first infantile act of heroism saved his brother’s sight. A scratch ran through the soft skin just under Abe’s eye.

“Best not tell Mama,” said Paul, who saw how close the talon had been. “She’s having the baby, best not tell her.”

Abe sat in the dirt, bloody-cheeked and crying. Paul shooed the chickens back away out of the alley and under a house.

“You won’t tell Mama will you?” he asked.

Paul held out his hand to help his brother up. Abe rubbed his unbloodied eye with the back of his hand, then put it out to his brother. His hand felt small and slimy when Paul took it. Paul could feel his brother’s twiggy bones, and he wondered about the new baby that was being born.

Margaret Patton Chapman received her MFA from The School of the Art Institute of Chicago. Her novella Bell and Bargain will be published by Rose Metal Press in November, 2014 as part of the collection My Very End of the Universe. Her short fiction has appeared a number of journals including Wigleaf, The Collagist, Elimae, and the anthology The Way We Sleep. She is prose editor for decomP magazine, and lives in Durham, NC. As a participant in the Letters Festival, Chapman will be leading a free fiction workshop on Saturday, November 8 and will read at the After Party Reading in the North Ave Room at Manuel’s Tavern the same night. Find more information at www.thelettersfestival.org.
Tags: fiction