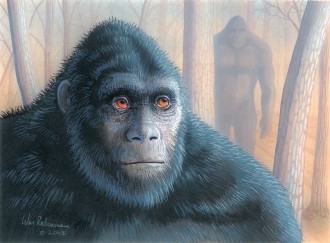 “And when you saw only one set of Bigfoot footprints, it was then that Bigfoot carried you”

I. I Want YOU For Sasquatch Militia
What would happen if we found and captured bigfoot?
The thing that impressed me is that he’s just a guy like
you or me sitting at his house recording stuff for youtube
he posts on some other forums i frequent
and i was impressed
I have a big foot who is apathetic:

he just sits around the house and does nothing

An apathetic bigfoot is more difficult to help
because there is no emotion, no fight, no
will to do anything
If your bigfoot is apathetic,
schedule an appointment with a physician
to rule out any physical problem

My bigfoot won’t sing in a group What should I do?
It’s nothing to worry about; it’s not life threatening
if your bigfoot doesn’t want to sing right now
If you think that’s bad, try having a bigfoot who won’t stop lying I ask my bigfoot
the                same question every day, “Is your room clean?” He proudly answers “Yup!”
Where did I go wrong?

My bigfoot refuses to smile for pictures whether it be school or family. He will be the only one in the picture looking like that.

He does not give a damn if he ruins other people’s pics by not smiling… He also will just stand there at camp not do take part in activities.

Wtf is wrong with him?

II. The bigfoot whisperer: how to make a bigfoot spirit stick

The bigfoot whisperer: how to make a bigfoot spirit stick
If you knew Butchy, you would know that he has some serious
bigfoot problems
Not to mention the ghosts and aliens

I’m certain that there are bigfoots. Here’s why:

–   I fell asleep riding a motorcycle and did not crash…I walked out on to the Emons
Glacier during a September blizzard and did not fall into a crevice…
–   I went into sailor bars by myself, in rough neighborhoods all over the world and
never fell prey to the predators in those places…
–  I’ve been in many bad fights and never was hurt…
–  I’ve been shot at and never was hit…
–  I’ve done countless stupid things and have survived…

Yes, I believe there are bigfoots in anywhere.

They have saved countless people’s lives, but I don’t know why they don’t save
everyone who is dying? It’s another question. Who can tell me?

III. If you would like to learn how to Communicate with your bigfoot check out the link below.

More bigfoots are reported in the USA than all the rest of the world together. I wonder if this is significant?

bigfoots do exist. when i was 10 i ran away in search of mine.
it ended up disguised as my grandpa so yea i know they exist
and that i have one. other bigfoots exist too. for those of you who dont believe
in any of it I don’t even know what to tell you.

I invented a bigfoot called Elmo

he is only new to the job and is always getting chatted by the big boss –
will be posting him soon in cartoon form. His intentions are always good
but he has too many human traits and that doesn’t sit
too well with the other bigfoots.

I have to say that I don’t believe in bigfoots. The idea of it creeps me out a bit. I don’t like the idea of being followed. Am I the only one who feels this way?

Counterpoint: Like us, bigfoots are the objects of God’s grace and love.
A bigfoot appeared and cured my daughter. The doctor said that she could leave
the hospital two weeks later. Really surprising! Forget to say,
that girl was born on Christmas Day.

While there is no scientific evidence that bigfoots exist, those who believe in their existence believe because it is true.

IV. There are very few people who can actually communicate directly with a bigfoot. Most of us who believe they exist only get glimpses of their presence, and that typically occurs when your back is against the wall, and you truly seek their guidance. At least that’s been my experience.

I was walking one day, in a nature park, and communicated the fact that I wanted to know; I needed to know if I’m here alone, dealing with life’s anxieties, or if there is someone by my side. I literally demanded an answer.

A couple nights later I had a very vivid dream,. It’s one of those dreams that appears to be real until you actually wake up. In the dream, there were several bigfoots around me. I thought I woke up and there were people in my room. My reaction was, “what the F?” I actually said those words, loud, but I was still in the dream. I tried getting up but some force kept me from moving; there was a pressure being applied to my chest as if someone was holding me down; I also could not move my arms, and I could not open my eyes, but I could see.

I could not make out the bigfoots to my immediate right but the bigfoot that was directly in front of me wore her hair exactly as my mother wore hers for years. Neither bigfoot had an actual face, and the bigfoots slightly behind me, to my right were more like silhouettes.

I forced myself to wake up, my eyes sort of popped open and the pressure I felt, holding me down, was released. I got up, walked downstairs to turn my deck light off. I did this because, a few hours later, when I would actually get up, I would check to see if the light was still off. Well, when I turned the light off, the bulb popped.  A few hours later, I woke up, walked downstairs, tried the light again, and it actually came on.

What I got out of this actual dream and concurrence was this: we are always surrounded by multiple bigfoots. They mirror what is going on in our lives at that particular time. For example, if you’re going through a lustful phase in your life, there will be a bigfoot surrounding you is lustful as well.

However, in the midst of those bigfoots, that may not have good intentions (they can’t actually harm you) there will be your own personal bigfoot that tends to keep the others at bay, while doing all she can to protect you..

That’s just my take, and that is what I learned from my experience.

There is a link below to buy my tshirt: Never drive faster than your bigfoot can fly.

That is such a moving story and it makes me want to have a relationship with my own bigfoot.

I believe there are bigfoots out there. I’ve seen a bigfoot in my room when I was sick and did not know how serious it was.

Also, If bigfoot isn’t real then what am I supposed to do with all this stuff?

Brian Fitzpatrick lives and works in Washington, DC, where he writes poetry and comedy pieces. His work has appeared in-print and online in places like Rattle and on DC’s Pink Line Project.
Tags: poetry