Big Ideas (Don’t Get Any) 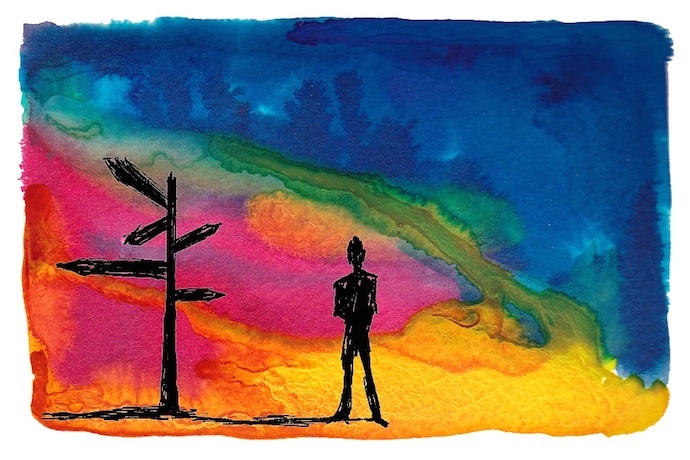 1. You had to move west maybe because that’s what everybody does, even if only a little, even if only imperceptibly—a few steps to the left after staring out the window at the windblown old men walking up and down the street looking for local bars that were torn down years ago. Ben says don’t go but that’s what Ben is supposed to say, what Ben always says. More of a command than a request. Sit, stay, good boyfriend. Ben not yet windblown, still punch and muscle, but with granite in his eyes, irises flat slate, and if that isn’t reason enough then what else would be. Barely any Ben to move west from.

2. You tell the people at the office that it’s just because you feel it’s time for a change, and that it‘s the kind of thing that happens all the time, and imply that in any case it had nothing to do with desperation. Desperation maybe not being as narrow a channel as you would have it, but not broadcast very far. If it belongs to you. You tell the people at the office that everything is already in place, smile loosely as if it were, as if everything weren’t still on fire, not the good kind, the fire of not knowing what else to do but flee glum interpersonal desperation in favor of the permanent grimace of being a constant stranger. Constantly strange.

3. Leaving the city behind and all the trees in it you never got around to climbing. Concrete that isn’t sentimental anymore. Everywhere you look the granite statues of secretly cardboard Ben looking away.

5. Knowing what you want, you say to your friends at the bar before you bow out early, is a matter of keeping both hands on the wheel and looking straight ahead, always, even though what’s passing by in a wobbly blur might be beautiful or majestic or on fire. Ben’s not there, hasn’t been there, Ben is every signpost at the side of the road too defaced by some beautiful miscreant’s youthful vigor for you to be able to read. Ben is ordinary business, Ben is 5’8”, Ben is what’s supposed to happen but then the wind blows. Ben is needlepoint, not fireflies. A parallel line. You tell your friends this is not about Ben, and seven times out of ten it isn’t. Westward the course of empire. Or just let nature take its course.

6. You buy your mother roses because you can’t think of anything. You buy yourself time with ordinary business for the same reason.

7. Stopping here and there to stifle screams in your car or recall a ghost story road map. Driving from wilderness to wilderness as if jumping between dry rocks in a river. The wilderness in your head and the one at home and the one at the other end of the phone, a cold call from a familiar, heartstrings with a sudden stranger, brushfires in the mirror and no steady home to phone.

8. Rivers filled with leeches and lost teeth. The wilderness of what once was is now unknowable, unlikely, all broken furniture and northern lights. Something you used to know and something else. Rivers filled with versioned histories and counterpunch need.

9. You tell the woman at the bank it’s a matter of consolidation, and you hitch up your pants as you stand there waiting for her to count the cash, again, and you wonder whether you’ve been losing weight. Ben sticks to the script. Ben says you don’t look like yourself anymore. When you ask him who you do look like then he doesn’t have a reply, waves the white flag, sloughs off a shrug or slams a river of doors on his way home. Ben is not, alone, a complaint; Ben always faces east.

10. Nights full of silent fortunetelling. A new day presented in the form of a horizon. You tell everyone there isn’t anything else to say, and you think you mean it, and you look into the mirror to try to figure out if you’re a liar. You watch yourself moving your dry lips forming the words impossible to tell. You still have a few suspicions not yet snuffed or wired shut.

12. Ben is a shrug, a long yawn you think you know how to pry loose from.

13. Pinching yourself internally when Ben doesn’t leak waterworks as much or as hard as you wanted him to. Though he does make certain promises. And pale demands. Commands. Canned heat. Though he doesn’t make any concessions, he sticks to the script. You watch him cock his head and stare back at you and wonder who you’re looking at. You spend the rest of the night waiting for the night to produce a doorway for you to walk through, and then you do, but even a closed door between you and Ben’s “this isn’t fair” isn’t far enough.

14. Hugging various people goodbye with various degrees of enthusiasm. Letting everyone know you’ll stay in touch, smiling wide, aiming to look alert and oriented. You give your mother roses and you give Ben almost everything he wants and then “what else did you expect” and then you set sail, a river of a country filled with leeches and lost teeth, with pared-down dreams.

16. Westward. Dreams of weeping in public and pressing against the windows.

17. Nights under the stars spent ignoring the stars. Nights spent smoothing things out. One more night with Ben or one more night without him, his half-full glass. One step closer and one step farther apart. He looks right at you all curled posterboard and chipped marble and tells you what you’re not supposed to say. You look off into the distance and there you are, what you are is only ocean’s edge, cliché, a house but not a home, doors ajar. The only thing you ever promised him for two years was that your leave-taking could be counted on.

20. Clouds passing between you and what you hope you are and what you want. You tell yourself what matters most is movement. “Just keep moving,” you mumble to yourself, even though you’ve already gotten there with no weary hurrah and are already starting to unload and unpack the minor history you thought it safe enough to keep.

Nicholas Grider is the author of the story collection Misadventure (A Strange Object), which was longlisted for the Frank O’Connor Prize, and the experimental book Thirty Pie Charts (Gauss PDF), and his work has appeared in Caketrain, Conjunctions, DIAGRAM, Guernica and elsewhere.