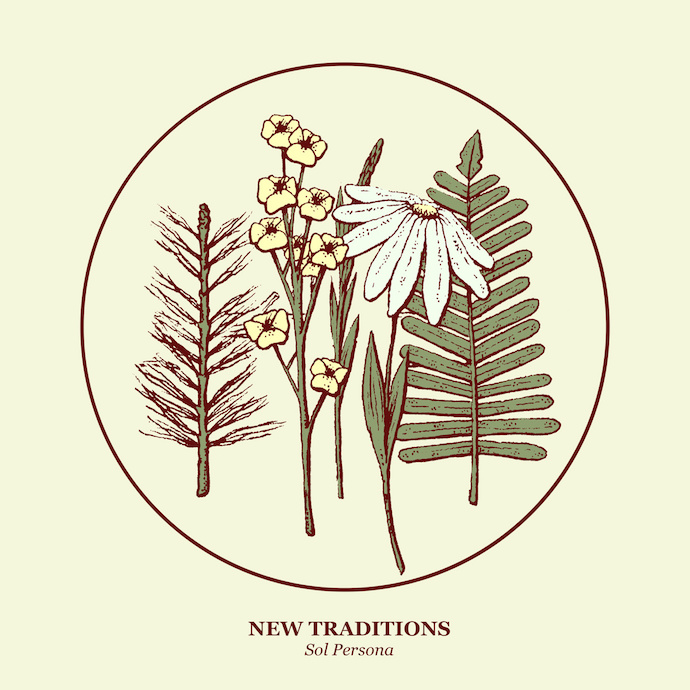 Sol Persona, the nom de plume of Karter Schachner, is a new solo project currently fusing its way into the heartstrings of the Pittsburgh music scene. With their lyrical nods to analytical psychology–i.e. Carl Jung: “But when you observe yourself within you see moving images. A world of images. Generally known as fantasies”–as well as transcendentalist authors like Emerson, I’d say Sol Persona makes for a great fit in a highly arts-friendly city like Pittsburgh.

When it comes to their melodic pulse, the meticulously recorded debut album, New Traditions, will perhaps strike a chord with fans of Sufjan Stevens, Sigur Ros, Perfume Genius, or even How To Dress Well. Daniel Strait is responsible for the first track, “Agnus Dei,” a sonically ethereal blast of chanting and glimmering radar-like tones of haunt; with layers of heavy turbulence and turmoil, Robert Nicholson performs significantly as the project’s designated cellist; and Schachner’s sterling falsetto howls collide dynamically with David Douglas’ jarring percussives. The good news: all six tracks are equally mesmerizing and enticingly showy.

Schachner also provides a brief commentary for each track on New Traditions. For instance, on social media he’s posted things like, “The Art of Life involves balancing our inward and outward consciousness, allowing creative energy and environmental energy to move us in the direction of universal truth & infinite love.” Alarming and unexpectedly theatrical, Sol Persona boasts a frenetic gallantry all its own. They also have a unique fondness for pine cones that brings to mind Dionysus’ signature party boy thyrsus! Schachner has written:

The pinecone is an occult symbol for the third eye, or pineal gland. It is representative of our capacity to experience the full spectrum of consciousness, both seen and unseen. Scientific knowledge of recent centuries has amended this ancient knowledge of consciousness on more objective & rational terms. By combining this ancient wisdom with modern efforts in psychology and neurology, we as a species are able to unlock our true potential as light-beings. 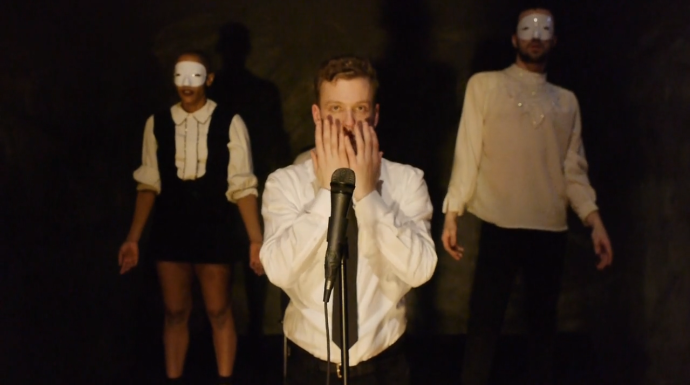 Influenced by everything from Phillip Glass’s Koyaanisqatsi to Nina Simone, Schachner is a thinker, which is an arguably dangerous but, I feel, necessary trait for any new musician. New Traditions is the kind of album that is “trying to tell a story.” Sol Persona wants you to feel overwhelmed and buried by that story. They are tired from “lack of sleep” and such maddening, insomniatic lack, according to Sol Persona, is caused by this chaotic world’s “lack of empathy.” The entire project seems very interested in persons who resist social norms. Conscious of environmental and social complications as well as persons who simply feel alienated in this increasingly catastrophic world, one gets the sense that Sol Persona is devoted to making life seem more livable.

The holographically charged track titled, “Speckles” provides listeners with exhilaratingly dramatic blooms of musical iridescence. My personal favorite of the album, the track’s manipulated breakbeats and lively swells of saxophonic palpitations at 1:50 (via Andrew Lake) impressively knot themselves into Schachner’s accelerating and reverberating vocals: “There’s a universe beneath the skin. / Where distant hearts cry out. / Stars collide as we redraw the constellations.” It’s a track that breaks the body open, crests, and concerns itself with humankind’s strange and strident existence. Questions of surveillance and self-surveillance are also raised: “Observing insects in the grass / Who’s watching us inside our rooms?”

ALL OF THE UNIVERSE IS WITHIN ME. This is my life mantra. I hold fast to the truth that our inner universe is as limitless and far-reaching as the outer universe, and that the two extend from our consciousness and progress exponentially.

The heartbreaking “How To Dream” sounds as though it’s channeling the same hypnotic chant-like repetition that might feel somewhat reminiscent of a Rolling Stones track like “I Am Waiting,” all while asking challenging questions like, “Creator are you there?” It repeats an ongoing theme of sadness in New Traditions that acknowledges not only a dilemma of forgetting “how to sleep,” but the limitations of one’s vessel of a body. In addition to evoking Building Nothing Out of Something-era Modest Mouse, the track’s blaringly sudden saxophone cuts in around 4:00 to deliver one heart-wrenching wound of a blow that feels—in the best possible way—anything but ordinary. It’s a song of masks and dreams. The Broadway-infected “Moonflower” track is similar content-wise and a music video was recently completed by Pittsburgh’s own Mario Ashkar. The video feels like an Arcade Fire-era collision of Robert Palmer’s “Addicted to Love” video and Stanley Kubrick’s Eyes Wide Shut. A bacchanal or an end-of-it all? I’m not quite sure there’s a difference!

“I sleep in a bed that is not my own. Another ghost, another body. Another day, another dollar.” Nearly nine minutes long, the album’s massive concluding track, “I Am Always,” will be stuck in your head after just one listen. Bittersweet and rather Baudrillardian, “I Am Always” reiterates its vexing tiredness and metamorphoses into something seemingly foreign and ghostlike. The drums pound on and on until it erupts into the finale near 5:45 with a lively and compelling funk reminiscent of Daft Punk’s Random Access Memories. With a taste for the theatrics and a sly eye always turned to his audience, Schachner croons and demolishes:

“I don’t call this heart my own because I believe this life is an illusion.”

New Traditions is currently available as a digital download.