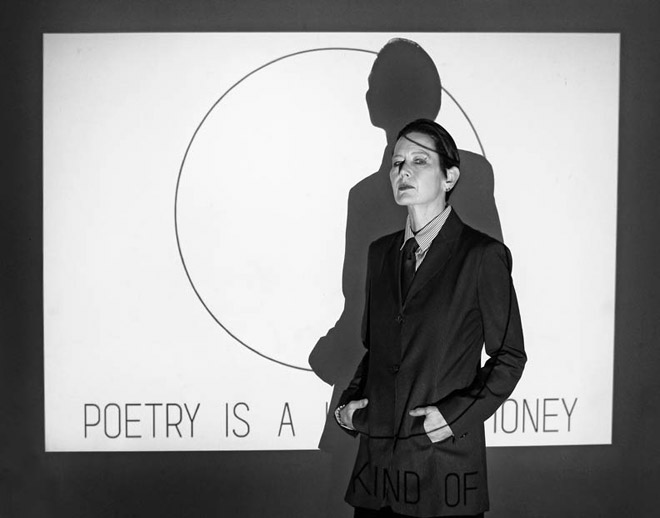 Ben Fama: In a recent 5-4 ruling in the Supreme Court, justices ruled that a person no longer has the right to remain silent as guaranteed by the Fifth Amendment. Much of your work (I’m thinking here of your piece Boycott, which you sight Lacan’s erasive assertions towards women, Lee Lozano’s Boycott Piece in which she stopped speaking to women, and Wittgenstein’s suggestion of an ethics of silence for women). What is your reaction, considering your body of work, assuming now that silence is not a lawful mode of defense or resistance?

Vanessa Place: Strictly speaking, what the Supreme Court indicated was that if you appear voluntarily to be interviewed by the police, you have no 5th Amendment right to have your non-verbal behavior kept from the jury. You can assert your right to silence during the interview, but the burden is on you to do so because you are, in theory, free to leave. This is a question of the relationship between the constitutional right against self-incrimination in a custodial setting versus the ability of a percipient witness to testify to behavior that, while perhaps telling, and perhaps even incriminating, was not presented as an assertion of silence. This ruling is in conformity with my own practice, both legal and aesthetic: one should always affirmatively assert one’s silence.

BF: Conceptualism is, as you practice it, writing that is not self reflexive. That is to say writing whose meaning is not determined by its text but its context. In your list poem, No More, you seem to call for an end of a certain type of poetry, one that includes almost the entire canon and a very large amount of the type of work being produced by MFA programs. What reactions have you gotten to this?

VP: More reactions against, I’d say. People are wedded to their symptoms, and one of the symptoms of poetry as popularly practiced is this intolerance of any intolerance. As if this bit of shuttlecock isn’t amusing, or, rather, as if the rush to defend the battered–as in breaded–walls of this sort of thing should be taken seriously. All this nonsense about poetry being good or no good or the relative merits of this anthology or that anthology, this garde or another. It’s a cottage industry. Once in awhile there’s some glitter or a good gob of grit that gets tossed. People take it all terribly personally, which is always a mistake.

BF: Kenneth Goldsmith has been named Poet Laureate of the Museum of Modern Art. He’s invited conceptual performers Rob Fitterman, Kim Rosenfield and yourself, among others, to design performances around the museums galleries. When VanessaPlace Inc. launched you held the press conference in an art gallery. You’ve also been invited to perform as part of the Whitney Biennial. Conceptualist poetics seems to be accepted and embraced by the art world, perhaps more so than the traditional literary establishment. Why do you think this is?

VP: The art world understands the need for an expanding market/field, whether it be in sculpture or literature. The literary world is still operating as a precious metals market, and this is its mistake. As I’ve said elsewhere, poets are the unacknowledged hedge fund managers of the world.

BF: Aside from your theoretical writing and your conceptual work, you are the recent founder of VanessaPlace Inc. You are also the editorial director of Les Figues, a non-profit press based in Los Angeles. You also practice law as a defense attorney representing convicted sex offenders on appeal. What’s a day in your shoes like?

VP: Naturally, it is just as one would imagine.

BF: Notes on Conceptualism repeatedly confronts conceptual work vis-à-vis the market economy. What do you think of Occupy?

BF: You say the Sobject is the perfect melancholic contemporary entity. Who wears this face?

BF: I was hoping you would say that. You said you don’t “go out” in L.A. What’s your relationship to Hollywood?

VP: Hollywood is an area in Los Angeles. It is also an industry and industrial product of, among others, Los Angeles and New York. Which Hollywood?

BF: So you aren’t “into” the glamour? What about as a system of signs?

BF: Are you watching international markets? Or do you simply like to visit?

VP: The disjunctive is always so interesting; I have no home anywhere in that sense, so I am always visiting. I would like to add that having a silver handbag would also be a very good idea. These things are quite seductive.

BF: You have a strong personal brand that’s supported by your appearance…all black. Are you “into” fashion and apparel? Do you follow the fashion world season to season?

VP: I have the style of my age, which is contemporary, or at least coincident. But for following–as Loos once put it, “the atheist among the aristocrats, raises his hat when he passes a church.”

Tell me what you find interesting, and that is your fashion.

BF: We are 5 years into Obama’s presidency, in the age of drones. People now are saying he is a war criminal. What do you see happening large scale politics and how do you react to it?

VP: Yes, we are still fighting our first conceptual war. Both in terms of target and in terms itself, war being a concept that we now practice as such. It would be easier if the burghers were as easily identified for and to us as they were for Baader and Meinhof, and perhaps they will be, later. I don’t knowingly react to anything politically; I’ve been spared the American trademark urge that there always must be something that must be done. Sometimes I do, sometimes I don’t. It’s site-specific. Like war perhaps should be.

BF: Deleuze has an essay called “May ‘68 Did Not Take Place,” saying, in paraphrase, that the attitudes of the French middle class just absorbed the call for social justice and change in the late 60’s, remaining the same. We’re fifty years into the future. Does it get better?

VP: Are you using the same time frame for the United States? Yes, and, of course, no. This is obvious. Do we get better? We are somewhat less racist, more stubbornly classist; we have perhaps less capacity for revolution, have become seemingly more juridical. Is this better? It is smoother. Our leaders are less likely to be assassinated, for better or worse.

I am not quite sure of “it,” perhaps. May ‘68 certainly took place as far as I’m concerned, but the United States never had a May ‘68. We had an April ‘68, which was much different. The leaders of the Black Panthers were eventually incarcerated, or otherwise effaced; the leaders of the radical feminist movement were eventually institutionalized, or otherwise effaced. On the other hand, there is less blood in the streets, for better or worse. We are against and for the inchoate more, that is to say, we tend towards abstraction in our wars and social orders, and it is difficult to do more in this sense than refuse.

BF: In what is probably the biggest public scandal regarding the United States political system (and there have been so many this year), George Zimmerman was acquitted for the second degree murder after shooting and killing Trayvon Martin, an unarmed teenager. Without getting into the details (which are widely available via google), how does the outcome of this trial sit with your experiences with the judicial system?

VP: One should not look to the law for justice. The law is about the law. Justice is about fantasy.

BF: I want to go back to something you said earlier, about not reacting to anything politically. I’ve always understood your work, a large part of it at least, to be polemical, an invective against things you’d like to see changed. Am I misreading you?

Although I might aside that perhaps to the writer the world is rich enough as is; put another way, my interest is utterly descriptive, non-prescriptive, absolutely unnormative. Or, as they say, res ipsa loquitur.

BF: The world is rich with stigma right now: The Chelsea Manning conviction, the imminent conflict in Syria, entire states becoming known for bad politics (Texas, Florida). Going back to your answer above, these “events” may announce themselves, for themselves, within the tone of the contemporary, though context is everything when their system of meaning must function as rhetoric. I guess my question is, are you attempting to give up agency and become a cypher when performing certain specific acts?

BF: Can you tell me about some of your early experiences with art and literature? Was there a breakthrough moment, so to speak, when you knew you would pursue a career as a writer?

VP: As I recall, it involved a beautiful girl on a beach.

BF: Earlier in the year, you started a project “The Soul of the Poet.” Anyone could be involved, and participants were instructed to offer you a price for their soul. How has it played out and what is the future of it?

VP: It is still in progress. The acquisition and management of eternal souls takes time. As to what might happen next, it is not for nothing that the damned only know of the past and future. That said, I hope to complete the piece within the next months.

BF: The OED announced a list of new words they’ve added this year, many of which were created and used online. In their words “With influences ranging from technology to fashion, there is something for everyone.” How are you reading this as a text?

VP: “How” is one question. Another could be “when” or “why.” What pricks in this list is the sense of vocality, of temporality. The endless lust for significance in the face of the tiny ticks of time. It’s a brutal piece, this.