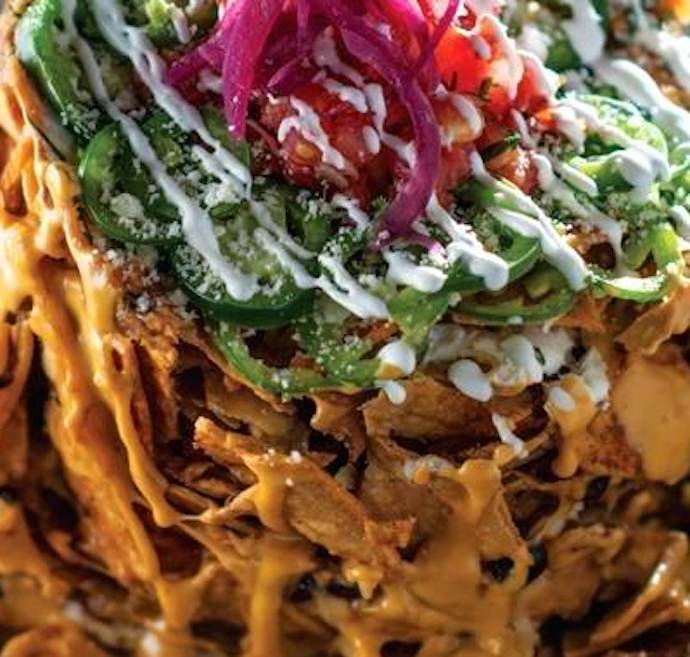 Bush begat guy fieri in rubbed out patch of shitty dust where he paced away the grass in his backyard. Dipped that spiky baby in brine to seal in the flavor with a tub full of mock amniotic and rimmed with salt crystals on a moonless night that the coyotes slept through. Bush cut the pepperoni square tip of his nipple and nursed baby guy fieri — this is where bush transmitted visions of the earth splitting open and puking magma slurry in a sputter of the last light on earth — all into the baby mind. This is celebrated with a dank communion and when you see guy fieri has a nacho they are tasting the clippings of god. From his other pepperoni nipple bush plucked nip curls and punched them onto the baby guy fieri lip and chin.

But also a early miracle. Teenage guy fieri turned pizzas into sandwiches and the square pepperonis always he folded into doughy goodness which sweet orange grease would cry out reminded him of his mother george w bush and their nursebonding whose duration went long after guy fieri could say more milk mother and long after guy fieri could pause to go to the bathroom putting a clothespin on the pepperoni meatus that flowed into him and gave him a special life force and after guy fieri started making ranch out of george w bush milk. That was the beginning of good times and soft memory. Only a tragedy could make you miss this.

Bush dried up and began to puff ranch dust that they brushed into shotglasses filled with mayonnaise and sourcream if they could afford it — sometimes a coyote wetnurse would donate their squirt in lean times. Guy fieri learned his first discomfort popping the coyote milk in discrete plops unlike the gentle flow that came from george w bush.

Guy went out into the villages to see how others got their seasoned breast milk.

They lived in a nest until guy fieri was a quarter century and his toenails hardened into nacho claws that he would use to fight the full moon coyotes. His mother stayed with dry eyes until guy fieri did the worm out of visual distance and off into the scrub. When george w bush saw the last of the shivering thistle he let himself cry. When the coyotes came to visit him he was balled up and pretending to be a egg. Or he was painting. When he painted eggs the coyotes stopped coming around. Then the next full moon looked like a egg.

Some of you call this the soft moon and others called this baby of the new year. But this is what I call moonblasted sky nugz. As guy lay dying his last thought was of his mother and how the pepperoni nips were sticky after he sucked. Then they were dead and within a few hundred years no one ever spoke of them again.

But one act of movement lived on in memory. A breaded and deepfried mound filled with a surprise of molten cheese when cracked shed quivering steam and the secret of world death was four hundred calories a bite. Every time a bloated body gives rift it is one chubby baby step to the end.