During the theatrical release of his fourth film, Starlet, Filmmaker magazine interviewed Sean Baker. At one point, he sketched out an artistic statement of sorts: “I’m drawn to films that blur that line between docu[mentary] and narrative. I want to keep working in the genre of human drama and relationship pieces, in which human interaction is the focal point.”

In a Baker film, characters hit the pavement. They hustle on the street, often trying to make ends meet, some working as prostitutes or salesmen hawking fake Jordans or Nikes. These characters are poor outsiders and undocumented immigrants just trying to survive. Moving from point A to point B, they encounter other people; they are the point B. His films are a series of confrontations in which we witness the tension, the repartee, the explosion that ensues when people meet. 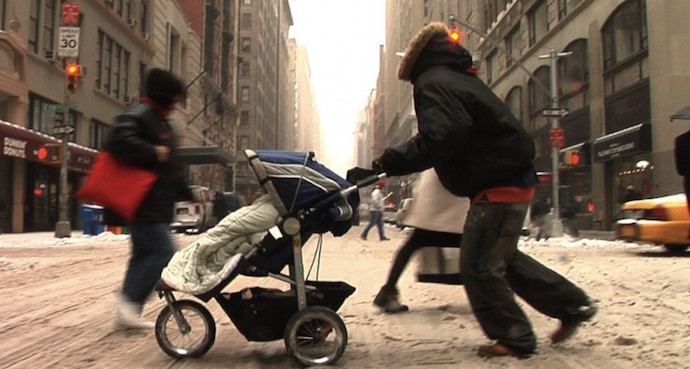 Prince of Broadway opens cold. The film drops you into a world of fast-talking hucksters chatting up people in midtown Manhattan. The first images are tight shots of Lucky (Prince Adu), the main character’s mouth gabbing away, enticing people, performing the hard sell on Broadway. Although dirt poor, he seems happy. He works for Levon (Karren Karagulian) who runs a store selling hot merchandise in a backroom. Lucky takes the subway back to his white one-bedroom hovel in the Bronx. Levon, on the other hand, drives his SUV to his colorful spacious multi-room apartment. Crosscutting between the two homes, Baker reveals who is hustling whom with set design.

All is going well for Lucky, as well as his circumstances allow for. That is, until an ex-girlfriend shows up out of the blue and drops a baby on him, telling him that the boy is his son. At first, baby daddy resists the fact that the child is his, pissing and moaning. He, however, grows to love and care for the boy. With such a story, the film strains a bit with a lingering whiff of the sentimental. Seen here and in his prior films, Baker’s narratives seem traditional, maybe even quaint, continuously building to something while allowing for deviations and digressions.

Using Panasonic handheld Hi-Def cameras, Prince has a raw, blanched feel with the whites in shots washed out. Baker often shoots characters from afar. While they are on a sidewalk, he’ll film them from across the street, or in one instance, from a car’s rear window.   Sometimes he’ll cut to a close-up and sometimes he’ll opt for a clunky smash zoom. Using either approach, this street-level view takes in the bustling rhythm and the cacophonous sounds of New York City.

The mad dash of Manhattan gives way to sleepy, calm San Fernando Valley in Baker’s following film, Starlet, the first work in perhaps a burgeoning “West Coast phase.” 20-something Jane (Dree Hemingway) wakes up one morning and balks at her unfurnished, yellow room. She spends the day going to yard sales buying items to decorate her room. Later, to her surprise, she finds 10,000 dollars in a thermos she bought from a crabby octogenarian woman (Besedka Johnson). She spends some of the money on nails and on a flashy new collar for her Chihuahua, and pockets the rest. A nagging guilt–or creeping consciousness, perhaps–makes her seek out and eventually become close with Sadie, the older woman.

Besides being set in the Valley, with its pastel oranges, pinks, and yellows, Starlet looks a bit different from his last four films. DP Radium Cheung uses a special Russian anamorphic lens that gives the film a crispness. There’s a sleekness to the film that’s missing from Baker’s other works. The key to the discordance between Starlet and Prince’s aesthetic may lay in his other films.

It’s a shame that the Lincoln Center’s recent micro-retrospective of Baker’s work didn’t include his first two films, Four Letter Words and Take Out, for they account for the change in Baker’s work. The latter, co-directed with Shih-Ching Tsou, sees him start to use handheld cameras, initiating his flirtation with social-realism, or neo-realism, or neo neo-realism, or whatever label you want to call it. The former, a personal favorite among his work, however, is something of a road not taken. Reminiscent of early Richard Linklater, Four Letter Words is a night-in-the-life of suburban college kids spending the wee hours together with high school friends during the downturn of a house party. Baker moves between a mix of people, between assholes, nerds, pricks, bros, “good guys,” sensitive types, that regale one another with sex escapades, booze, and bud. Four Letter Words is about a transitional period in which hanging out with past friends from a past life don’t seem to fit with the present self. 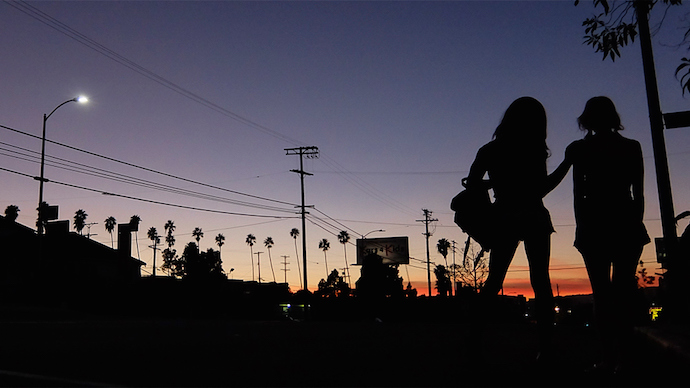 Baker’s latest film, Tangerine, begins with a shot of hands over a bright yellow table, much like the way Starlet begins with a shot of a stucco yellow wall in Jane’s room. One hand clutches a donut on a napkin as the camera pushes back, revealing itself to be an overhead shot of two transgender prostitutes, Sin-Dee (Kitana Kiki Rodriguez) and Alexandra (Mya Taylor), sitting and chatting at Donut Time. What follows is an erratic volley of shot-reverse-shots of the two. Sin-Dee, fresh out of jail, learns that her pimp-cum-lover, Chester (James Ransone), cheated on her with a “fish,” whose name begins with a “D.” And thus the melodrama begins, and goes hard.

Tangerine has a tripartite narrative, and alternates not only between Sin-Dee and Alexandra—handing out blue flyers everywhere so that everyone comes to see her perform at a bar that she pays to sing in—but also Razmik (Karren Karagulian), an Armenian cabdriver and family man who, during his downtime, pays for transgender hookers. Later, the film comes to a hilt and explodes in a cacophony of voices at Donut Time. Let us not forget that Baker likes characters with accents, with dialects, with different ways of speaking. There’s a musicality—a result of his fondness for improvisation perhaps—in the way that he organizes how characters deliver lines as if they were bouncing off one another.

All roads lead to Donut Time. At that fine establishment, the narrative strands converge. The commotion eventually spills out into the front of the shop in which characters are backlit with a sickly green from the neon signage behind them. Afterwards, there’s a cool down as they mend hurt feelings and frayed relationships.

Not at all gimmicky, the three iPhone 5 cameras Baker and Cheung use lunge forward and pull back as Sin-Dee pounds the pavement of L.A. strip malls, on the hunt for this Deena, Daniel, Dinah. With cuts upon cuts, and alternating between wall-to-wall music and ambient, diegetic sound, Tangerine is like Ryan Trecartin on one espresso, if you can imagine a less wired Trecartin work. Nervous, crass, vulgar, these qualities are a welcome addition to Baker’s oeuvre, evoking John Waters and the Kuchar brothers. Tangerine is Baker’s best film to date; its high-strung pace and delightful artifice bend and warp Baker’s realist tendencies. Tangerine is not a step, but a lunge into a new direction.

Tanner Tafelski is a graduate student in cinema studies at NYU. His writing appears in Film Comment, MUBI Notebook, Indiewire, Desistfilm, and Art Decades. You can check out more of his work at his personal blog, Mongrelmuse.blogspot.com. You can also give him a holler on Twitter: @TTafelski.
Tags: film