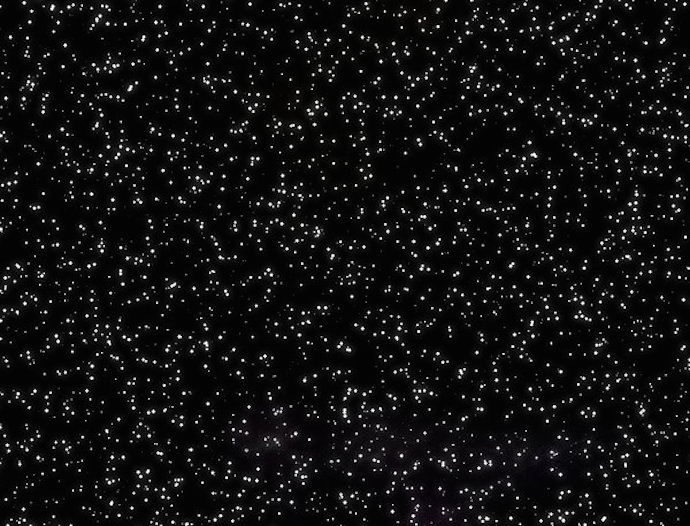 I park my car in the cul de sac on Natoma. As I approach Lafayette Street, a thin woman maybe in her early 20s passes me. She’d be attractive if it weren’t for the sores on her face and the way she confronts me with too much eye contact and a sort of glazed smile. She’s wearing a short white dress and one brown lace-up boot. Her other foot is bare.

Her presence doesn’t surprise me. Since 2012, when Twitter established its headquarters two blocks away, there’s been an ongoing battle to transform “Mid-Market” from sketchy skid row to up-and-coming “New Market,” as boosters and realtors have named it, or even the hip truncation, NEMA. Many of the displaced have moved East, to my micro-neighborhood. One guy regularly sits on the corner of my alley, shouting in different voices. His range is remarkable. Kevin and I lean over the outdoor landing of our rent-controlled Victorian and snoop. Rocking and wailing with his arms wrapped around his knees, the guy looks tiny. He doesn’t seem to be saying words so much as painfully expelling them. At times he sounds just like Regan in The Exorcist and I’m convinced he’s possessed, even though I don’t really believe in possession. Stupidly I call the cops and say, “There’s a guy on my corner who needs help.” The same migration happened when the City cleaned up Civic Center; it has been happening over and over ever since I moved to South of Market in 1990. In San Francisco when neighborhood associations or other vectors of power complain loud enough, police herd undesirables to the next neighborhood over, until that neighborhood generates enough political clout, and then they’re herded elsewhere. I learned this during the crack years. The crack years were scary, but fascinating to watch from my bedroom window and as I walked down 11th Street between Market and Mission. Vans distributed to bicycles that distributed to individuals. Person to person sales reminded me of gay cruising, the way transactions happen in plain sight. Two people approach one another, and without making eye contact, one stuffs something into the hand of another. The one receiving the good then heads to the closest alley, my alley, to smoke it. I used to joke I knew so much about crack sale and distribution I could go into business myself.

The one-booted woman loses interest in me and walks down Natoma towards 11th, weaving in the middle of the street with an indifference that could be described either as saunter or stagger. She seems weightless. Her otherworldliness and that one boot—it’s as if Bess—the title character of Daphne Gottlieb’s 2013 Spolia chapbook—has materialized before my eyes. Bess too wears only one shoe: “What I haven’t done a good enough job of telling you yet: How gone Bess is. She is the a-Bess. She is covered in menstrual blood, a Carrie in pink long johns wearing one shoe.”

The story of a drug-addicted young woman lost to psychosis, Bess is a Gothic horror novel distilled to 3100 words. The drug/prostitution maze of the single resident occupancy hotel (SRO) has entrapped Bess and endangers all who enter, including her case workers. Of it the female case worker ponders, “Can a place itself be bad? Is the ground under Auschwitz—the land itself—the brown earth that smells just like dirt—is the land itself evil? Is the land under Ted Bundy’s house cursed? Was there blood spilled under the labyrinth that made it hungry for more? Is there a reason people get swallowed up or snuffed out or trapped in a labyrinth?” Stephen King would answer, yes, the SRO has become a Bad Place. From Danse Macabre: “When we go home and shoot the bolt on the door, we like to think we’re locking trouble out. The good horror story about the Bad Place whispers that we are not locking the world out; we are locking ourselves in . . . with them.” In Bess it’s difficult to locate where corruption lies. We have the behemoth of social services, designed to assist, but which threatens to dehumanize all involved. We have the two case workers trying their damnedest to be the good guys in a system that invites failure. “This is what I do: I take lost people and I give them beds in places with big rooms with many beds.” And then we have Bess, who remains remote, manipulative, un-exorcize-able. “[O]ne Frye-boot on, still makes with the vacant, absent look. Nothing much matters to her, I think. Nothing is getting through. She’s gone away someplace.” In her schizophrenic haze, Bess is unable to take care of herself, and thus legally absorbable by the social services system. “She is the graybrown of the walls. Her pinpick eyes glare right through the curtain of hair. Her mouth is an asterisk. She nods that she will come with us because she has no choice.” 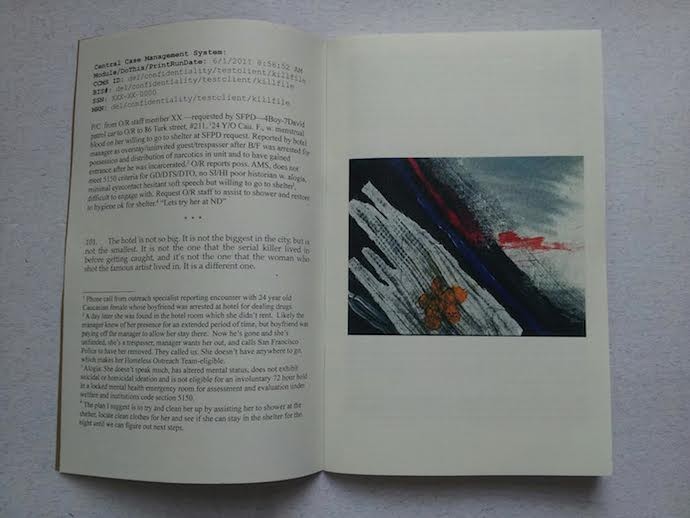 I misplace my copy of Bess so I order another. The day it arrives I take it to CCA and scan the entire chapbook, cover included, email it to myself, download it on my iMac, rotate it 90° on rotatepdf.com, upload it to Dropbox, download it onto my iPad Mini. Bess is no longer subject to loss and decay. Her spirit has entered the Cloud, where we can access her from all our devices.

In the “Experimental Writing” seminar I’m teaching at San Francisco State, the students loved Bess. They each had to go online, order the $8 chapbook directly from the publisher, and checkout with PayPal—there is no other way to get it. Rather than complaining, the students discussed how the difficulty in acquiring the text enhances the marginality of its subject matter. Then Philip said that Bess exemplified the point of all our readings this semester, that experimental writing allows you to address experiences that wouldn’t be possible in conventional writing, and I wanted to hug him. Class ends at 7:00, I’m hungry and don’t feel like cooking, so I zoom over to the super-trendy Bi-Rite Market. When I get to the Mission, driving turns rush-hour slow due to the towering Google buses, the white 2-decker Wi-Fi enabled shuttles hauling tech workers back from Silicon Valley. They glide through the streets like snakes—no, worms—no, slugs with dark eyeless windows—giant white slugs of capitalism clogging traffic with their slime. It’s not just Google—it’s Facebook, Yahoo, Apple, and Genentech—but all the buses are called Google buses. In her 2013 “Diary” piece in The London Review of Books, Rebecca Solnit suggests that this latest wave of tech invasion, the one that these Google buses have come to symbolize, has turned San Francisco into a boomtown. “Boomtowns also drive out people who perform essential services for relatively modest salaries, the teachers, firefighters, mechanics and carpenters, along with people who might have time for civic engagement. I look in wonder at the store clerks and dishwashers, wondering how they hang on or how long their commute is. Sometimes the tech workers on their buses seem like bees who belong to a great hive, but the hive isn’t civil society or a city; it’s a corporation.” At 18th Street the bus in front of me unloads a mass of sneakered twenty-somethings carrying Rickshaw messenger bags, dozens of them walking towards Valencia. I’m reminded of when my grade school let out and 173rd Street would be packed with children trudging towards freedom. Maybe that’s where the phrase school of fish comes from—a communal mass flowing towards a destination. Since the buses arrived, San Francisco rents have risen astronomically and no-fault evictions have gone through the roof. On Dolores, across the street from where my friend Wayne lives, they evicted a woman in her 80s with cancer who’d lived in her apartment for like 500 years. I hear these stories constantly, and my rent-controlled funky railroad flat is feeling awfully precarious.

Throughout Bess Daphne Gottlieb renders experience in bald language that ranges from clinical to desperate. In a sort of emotional echo chamber, Gottlieb overlays the characters’ everyday hell with the myth of Theseus and the Minotaur. But Bess and her social worker are never recast as artsy-fartsy mythic heroes. Rather, fragments of the myth resonate with the clinician’s psyche as she encounters the nightmare of her client’s plight—the labyrinthine corridors of the SRO—the terror of being lost—the longing for an escape route—the desire to destroy evil, to locate it in a single source, the Minotaur, rather than a systemic crisis that’s unstoppable, like a perpetual entropy machine. Narrative used to go like this: order is disrupted, and the trajectory of the plot brings things to a new state of order. But what’s happening in San Francisco is escalating disorder with no restoration in sight. When Bess is sent to a mental institution, it’s not satisfying, but it creates a sense of closure. For her. For the book. For now. But the labyrinthine systems that trapped her spiral on and on and on. I sit at my computer trying to ignore the male voice outside who rants incessantly. I can’t make out any words—it’s like he’s spewing the preverbal rage that’s choking the rest of us—rage I see whenever I check the news or Facebook or Twitter—rage that’s been compacted to slogan, a pressurized neutron of meaning. The man’s vocals explode in the street, rattling the black glass of Twitter Towers.

“Bad Places” is an excerpt from When the Sick Rule the World, coming this fall from Semiotext(e).