Babble Cry: A Review of mUtter-bAbel 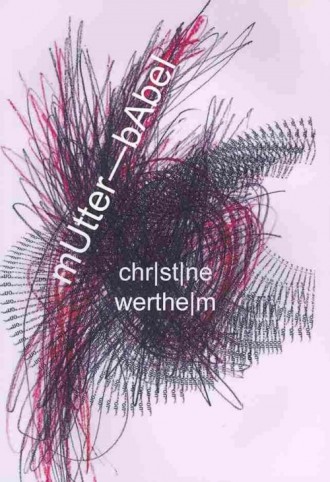 “waaa unnnnce upon a t t t time th th th” The insistent pale day of pAge. The ashy, onamatopoeic gradations of Christine Wertheim’s mUtter-bAbel!—the post-hymen song’s exposure to the first light that veers itself into an infant’s eyes! The chaotic baby-babble pile-up of born and unborn betweenings of gender!—of female or male presence?—of what does our future hold? What is the cost of our network of Symbolic relations? What should readers make of this disheveled gash-environment of “s/he” noises persisting from behind a uterine curtain of crayonic impasto? Imperfect, our future? Hell yes! Imposters, future parents? Accusations will soar! (Like our world’s inevitable drone-increase!) Wertheim’s mUtter-bAbel is about our future. Our most current archaeology of knowledge as well as our TBD future-oriented archaeological endeavors.

In No Future, Lee Edelman’s concept of “reproductive futurism” acknowledges the Child as “the obligatory token of futurity” that helps in maintaining everything from a right wing heteronormative social order to a consistently oblique justification of what constitutes ‘authentic’ family frameworks. Our futurity is a futurity deserving of “indictment,” as Wertheim has already decreed. An indictment articulated through the brutal spiraling and blistering rhythms of infantile voices (“MUMUMmmm”). Blood-scrolling and ink-chuting my way through these pages (?) or ages of scrawled-on scribble-pulp and other various ferocious connectors was unlike most experiences I’ve had with poetry. 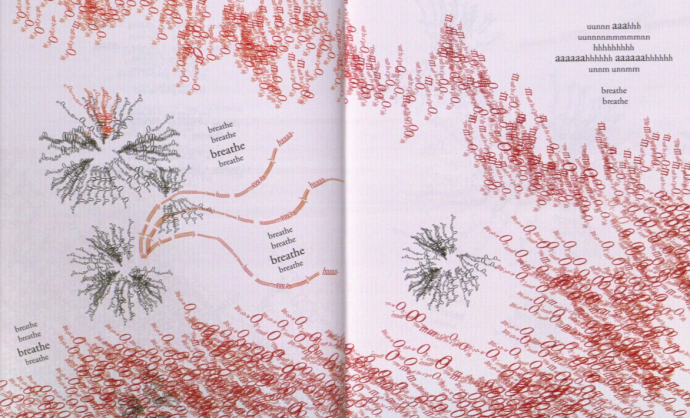 In the “b|rth hymen” chapter, the womb-colored wipes of text—of long, tubular regurgitations of “uuuuurrrrRRRR” and ceiling-fan cycles of “th|’s0ng’s of the-m-any-0thers’fl0w-er-ing v0|ds”—often appear to be seceding from or resisting the other multiplying blossoms of wound and noise that sneeze and phlegm across the pages. Perpetually upturning and crossing over into a history of a m-0ther body’s breathing exercises, the text-clods that make up Wertheim’s syntactically tychic morphology reminded me of the future-oriented archaeology Foucault wrote of; one that indicates “a possible line of attack for the analysis of verbal performances.” A nowness, an urgency matching the crude immediacy of mUtter-bAbel’s physical excursion.

In his Archaeology of Knowledge & Discourse on Language, Foucault continuously confronts a society’s inability to confront the very laws—the grandest of narratives—that govern its not-always ‘civil’ civilians. In mUtter-bAbel, Wertheim utilizes the spatial coordinates of birth to introduce numerous babbling voices that seemingly extend across time and space. Additionally, the voices aren’t necessarily transmitting the English language, but a babble always already shaped by the ominously ‘brighter’ goals of tomorrow. Your goals? My goals? What exactly are these sounds and cyclical glyphs communicating? And what is exactly anyway?

For Wertheim, the neutrality of the English language will not do. The neutrality of any one language will not do. (“We enter language and language enters us in many different ways, / all of which may be present at any time.”) We must rid ourselves of the ideal bestness we associate with any one particular language. (And maybe this is also what drives artists like LaTasha N. Nevada Diggs to write in multiple languages!) Wertheim’s archaeological futurity appears to be dependent on the most current tense. In stripping language down to its reddest chaos of angles and splatter—in ridding language of its present-day ineffectiveness—the artist and language are left jagged and open like wounds waiting to be filled by a later linguistic TBD flux.

In a later chapter called, “the turn|ng p0|nt,” the fullness of Wertheim’s syntactical trajectory begins dripping its way into the 0s of the word processor-formatted “0ther”s as well as the similarly formatted 0s of numerous “N0thing”s. The fissure-like imposition of the growing notion of the Child (and the parent-wall of the surveillance room it’s tacked to) increasingly resembles the visual intrusion of speech throughout the book. 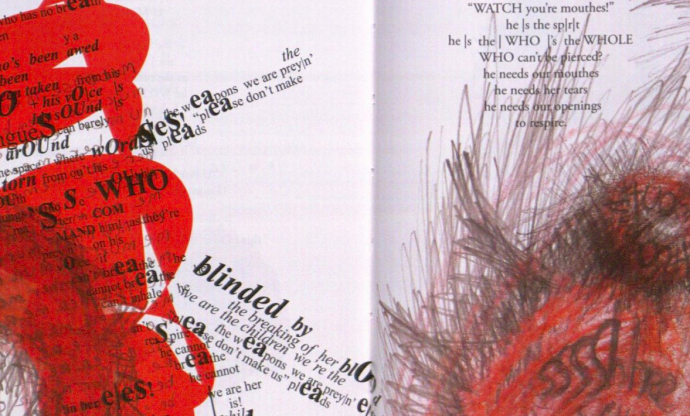 As I surrounded myself with our logothete’s shit-howling (something reminiscent of Hans Richter’s “bluku terullala blaulala looooo…”) and shit-violent interpenetrations of “sh|t h0wle,” the hole of my mouth (and the “h0wwll” of someone else’s mouth) and the slime of my tongue produced shapes for forming whimper noises (“llww,” “owaaaa”). mUtter-bAbel increasingly resembled not a necessarily ‘clean’ slate, but an excremental, experimental one. The repetitive violence of the garish, page-incising “Shit”s and their pink-tar stains prompted me to consider Bataille’s excremental economics: “production can be seen as the excretory phase of a process of appropriation, and the same is true of selling.” Production and selling, for someone like LRA leader Joseph Kony, means appropriating thousands of Ugandan child-bodies as sex slaves and even as soldiers. The womb, the mothering function, is appropriated as Kony’s hegemonic tool for sustaining mass violence and slavery. In reading lines like, “we are the children we’re the / the weapons we are prey|n’ ‘please don’t make us’ ‘pleads’” against the book’s relentless swirls of grotesque storm-cloud sgrafitto, one begins to see parallels between bodies at war and the physical act of writing language. Of writing poetry. The book itself appears to be undergoing a trauma of its own with each turn of the page. Contusions, swells of pictorial materials—a complete dissolution of form.

Wertheim begins mUtter-bAbel with, “this is the story of a language and some bodies.” The conclusion appears to be up to us. The war-torn voices within this incredibly challenging project—this anatomical excavation into history-bruised earth—has left me not wanting to obsess over where the blurbs on the back of the book came from (like Kevin Killian) but, rather, left me wanting to better realize a coexistence of persons, statements, concepts, conditions, languages, and ideologies. mUtter-bAbel might be a book written by someone who has a profession and it might have been blurbed by someone else who has a profession, but I’m definitely not going to wag my finger at persons with professions who choose to take the history they have been taught and turn it into a means of teaching against, as Louis Althusser has noted, “the ideology, the system and the practices in which they are trapped.”