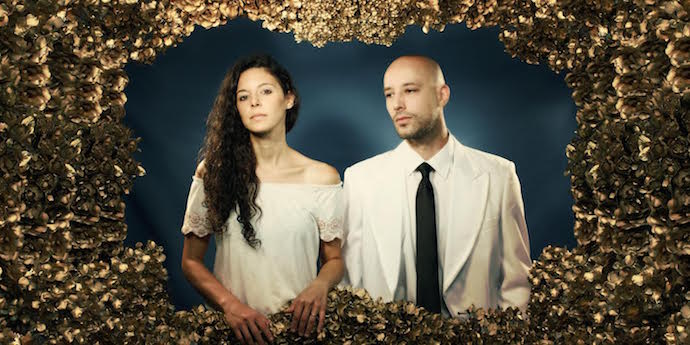 Forging beauty out of chaos with their explosive fusing of widescreen concepts and surreal psychedelia since their inception, mr. Gnome, singer/guitarist Nicole Barille, and drummer/pianist Sam Meister, continue to build multiple bridges for its fans and listeners that ultimately lead back to their dream-like, hypnotic realm of rock ‘n roll.

Incredibly, Barille and Meister continue to keep their operation truly DIY. Encompassing the hyper-stylized videos they’ve come to be known for (specifically, the epic video short for “House of Circles” featured by NPR and countless others), the fantasy-like imagery of each of their albums, the head-turning band photography and obviously, the inception of each album.  mr. Gnome has been praised by the likes of Rolling Stone (who named them a “Band To Watch” in a 2011 spotlight review for Madness In Miniature), NPR, Paste, Esquire, Spin, Magnet, MTV, BUST Magazine, and countless others. They’ve created fans from around the world from constant touring, and for both their artistic integrity and its ability to create undeniably original musical imagery highlighted by haunting lyrics, dynamic instrumentation, and soaring vocals.

mr. Gnome is one of my favorite bands and one of the first names I thought of when I started this series. As a two person group, their music exists on some border between savagery and beauty, simplicity and virtuosity—impossible to classify for its range and inventiveness. Their album art and music videos are equally brilliant, and difficult to describe—populated by fairies and sinister beasts—and all together the mr. Gnome aesthetic operates in a universe all its own, a wonderful collision of nightmare and dream. So it is perhaps no surprise that they chose to discuss the work of the great outsider artist Henry Darger, whose language alone seems comparable to theirs.

RK: Can you explain why you chose Henry Darger? What was your first encounter with his work?

MG: We are inspired by so many visual artists…past and present…and there are so many artists we love who have gotten plenty of recognition so we wanted to pick someone a little less known.  We first saw the work of Henry Darger… honestly, I don’t remember where exactly we first saw his work.  Pretty sure it was in a folk art book.  We’ve always been inspired by “outsider art” – artists who had no formal training but simply found their own style because of their love and need to create.  Shortly after seeing that first piece of Darger’s, we purchased In the Realms of the Unreal, a documentary exploring his work and life.  He has an incredibly interesting story…we’ve been fans of his work ever since!

Would you describe the Darger’s work—try to capture what makes it significant and interesting. Please be as technical (or not) as you like—I’d like to come as close as possible to seeing his illustrations from your perspective.

Being huge fans of surrealism, Sam and I were both instantly drawn to his work and this piece specifically. I’ve always loved art that takes me out of my current state of reality, something that inspires me to see beyond the “norm.” Darger’s work consists of tall tales, dreamscapes, adventures beyond this realm . . . and you can see it all within this piece.

What makes this work so interesting to me is the innocence within it. There’s an innocence within the piece itself and an innocent perspective held by the artist. He focuses solely on children and their carefree, adventurous spirit that allows them to see things with wonder and curiosity. In our adult lives, I think some of us are constantly trying to hold onto that inquisitive nature . . . seeing things for what they could be vs. what is simply on the surface. I love that we’re able to see a small slice of what is going on inside of Darger’s head from this piece. It is weird and wonderful! 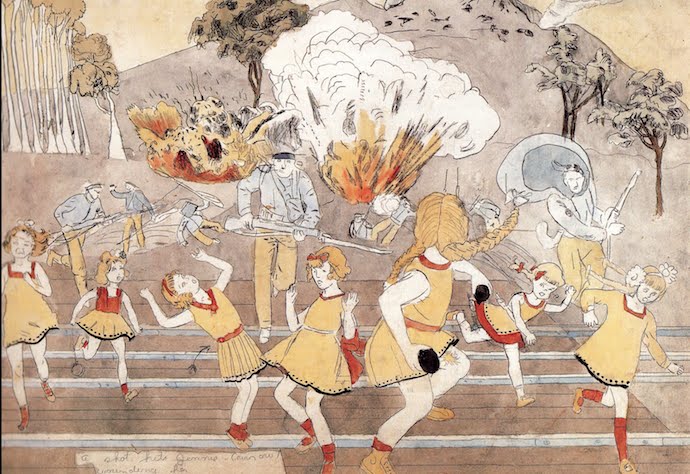 What qualities do you see in Darger’s work that also exists in your own?

When we stumbled upon Henry Darger, his work reminded us of both our music and the art we’ve created. His art touches upon good vs. evil, surrealism, nature, color, adventure, war, love, fear, etc. He was a multi-media collage artist who created these fantastical scenes by combining images from magazines/catalogues with watercolors, ink and his imagination. We loved the creative approach he took in his work and the stories he was able to convey in a single image.

More specifically can you point to one of your own works to illustrate qualities you find compelling in Darger?

Henry Darger is known for creating the longest known work of fiction ever made – In the Realms of the Unreal, a 15,145-page book created over six decades. That in itself is an impressive, if not bordering on completely insane, accomplishment. If you look at the content Henry Darger covers within his work—there is a playful side to his work—innocence, fantasy, youth … but then there is also a dark side–war, death, fear. Within our own work, we are constantly commenting on the good and evils of the world. The dichotomy of human nature.  Our song, “House of Circles” is  a 6+ minute adventure that talks about love, confusion and despair. Trusting people in order to find love, losing yourself within your own mind and finally feeling a lack of trust with the world around you. It seems as if we are both reflecting on what it’s like to be a human being.

Finally, do you approach illustrations in the same way you listen to music? How so?

I think with all art, I’m searching for something to make me feel! To make me think in a different way or just to simply touch my soul in a way that makes me feel alive. So yes, we approach our visual art in the same way we approach our music writing … blindly and with great passion!